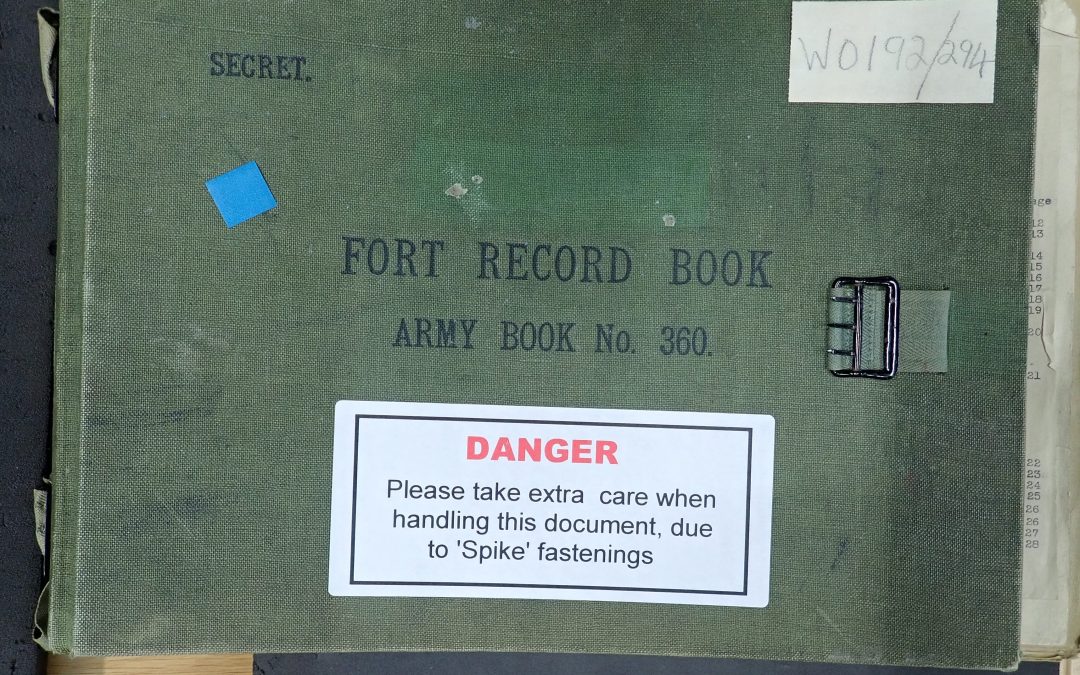 I recently came across the Fort Log for World War Two and up to the start of the demilitarisation of the Island in 1957 together with a Royal Engineer survey and a couple of photos of the same era. The Fort Record isn’t a daily diary of the period but is in 3 parts. Part 1 contains the Tactical information, Part 2 Historical and Administrative details and Part 3 Statistical information. The Historical details includes a timeline of major events that happened such as the upgrading of defences and armaments and when the Island was subject to attack. This blog is an update of the previous World War Two blog using this additional information.

The Island role remained one of close defence guarding the approaches and entrance to the Sound in conjunction with a number of other forts in the area. Those Forts included Bovisand and Picklecomb, Western Kings, Renney and the Lentney Brake Battery which were armed, searchlights only were at Eastern Kings and Mt Batten with the RAF RADAR station collocated with the Navy Wireless Station at Fort Staddon. Other forts in the area were used for Barracks and as Storage Depots for stores and materiel. The development of planes and specifically Bombers hadn’t changed this. The Anti-Aircraft defences for Plymouth were a ring of 20 Anti-Aircraft Batteries 20 miles outside the City stretching from the Jennycliffe area round to the Rame Peninsular so they could engage the Bombers before the bombs were dropped. The Island was too close to Plymouth for that role and the main threat the Island was to counter was seen as Motor Torpedo Boats or MTB’s.

Since World War One there had been a Civilian Caretaker maintaining a permanent presence on the Island. Originally a small detachment of Gunners had come across from Penlee Battery but later B Troop of 261 Independence Maintenance Battery was established at Western Kings Fort in Stonehouse. This consisted of a District Officer, Master Gunner and 5 Civilian District Gunners to maintain the armament on the Island. They would be augmented by tradesmen and additional manpower if repairs or works other than standard maintenance was required. The Island was still used for training so at times, usually the summer months territorial units would exercise for a few weeks. Normally this would consist of dry training followed by live firing then large scale exercises with other forts and the Royal Navy acting as enemy to try and breach the defences and attack Devonport.

Two Gunnery Rangefinders were stationed on the Island. One covering the South West Channel from Barn Pool by Mount Edgecomb out to the Breakwater and the other from Mt Batten to the Shag Stone Beacon. The Rangefinders provided the range, direction and elevation or depression required to hit enemy ships and passed to the Guns from the Fire Command Post to the Gun Batteries in the form of a Fire Control Order.

At the outset of the War the Island was scaled to be manned by 407 (Devonshire) Coast Regiment Royal Artillery which was a Territorial Unit. The Royal Garrison Artillery which manned the Island in World War One had been disbanded and its units reformed as Coast Regiments. Regimental Headquarters would be on the Island to from Drake’s Island Fire Command with two Batteries to fire the Guns. The Artillery were also responsible for their own local defence and security so unlike World War One no infantry units were assigned to the Island. For local defence the Island in addition to the personal rifles of the individual Gunners had a singe .303 Bren Gun.

There was one telephone line to the Mainland which connected to the military exchange at Devonport. In addition there was a wireless station on the Island as an alternative means of communication with the mainland. There was also a single Signal Pistol on the Island as a last resort. Internally there were telephone lines connecting the Observation Posts, Searchlights, Generator Rooms, Fire Commander, Battery Commander, Plotting Officer and Director Towers. The Guns were communicated with by Loudspeakers at each of the Gun Positions. Alarm circuits operating alarms were also in the key positions of the Island so in addition to the above they would be in the accommodation and Gun shelters. The Gun shelters were for the Gun Crews on duty but not in action so if the alarm was raised they would know to man the guns. The General Alarm was one long ring, the Gas Alarm the sounding of rattles and the fire alarm was raised using gongs.

Transport to the Island was supplied by 29 (Water Transport) Company of the Royal Army Service Corps and was based at Sutton Pool. There was no tunnel from the Citadel to the Island!! Heavy Stores could only be moved at high tide as the boats had to be positioned under the main crane. There was no fresh water supply on the Island and all water was bought across by water barge and pumped into the Island holding tanks at the Barracks end of the Island and the Casemates. There were two main Landing Places, the newly built pier and a slipway adjacent to it.

As it became apparent war was coming the manning on the Island gradually increased and at the outbreak of war in 1939 the manning consisted of 13 Officers and 144 Other Ranks from the Royal Artillery and 3 Officers and 49 Other Ranks from their considerably more intelligent and handsome comrades in arms of the Royal Engineers together with an Royal Army Medical Corps Officer and 2 Orderlies. This included the manning required for Western Kings Fort so not all would have been stationed on the Island. Both the Gun positions and Observation Posts were to be manned 24 hours per day now we were at war.

At the outbreak of War one of the 6 inch guns was transferred to the Citadel and one 12 Pounder was moved to Fort Picklecombe leaving two 6 inch Breech Loading Guns on the Centre Battery in the Close Defence role and five 12 Pounder Quick Fire Guns in the anti Motor Torpedo Boat Role. The 6 Inch Guns also provided back up and support the Examination Battery at Fort Picklecombe. The Examination Battery could be called on by Naval Examination Officers who would investigate unknown or suspicious ships approaching the entrances to the Sound.

The defences hadn’t been upgraded since World War One and the Luftwaffe presented a new threat so work began in September 1939 on new Battery Observation Posts and on a new Fire Command Post. Whilst this was going on the Regiment needed to train its own personnel as well as train drafts that were being received from Civilian life. This period of training appears to have coincided with the maximum numbers recorded on the Island which peaked at 490 Officers and Men by 1941 after which it started to fall away. This period up to 1941 also saw the threat of invasion at its highest and it only receded after the Battle of Britain was won by the RAF in October of 1940 and when Hitler invaded the USSR in June of 1941. This really shows how underprepared the Country was for the outbreak of war. Just over a year into the war in August of 1940 work began on two gun emplacements, one at the Western Battery and one in front of the Casemates to house upgraded twin 6 pounder guns. In the meantime upgraded shields for the Centre 6 inch Battery were installed.

The Island was not a target for the Luftwaffe, Devonport and Plymouth were the main focus for bombing raids. However bob aiming was not that accurate and on 21 March 1941 31 Incendiary or fire bombs hit the Island which were dealt with by the fire measures in place and several High Explosive Bombs landed on the beach near the jetty with more hitting the Sound close to the Island. Some minor building damage was sustained in the Barracks and Canteen and one Gunner was wounded. This turned out to be the only injury caused by enemy action throughout the War and in fact over the course of both World Wars. A second raid affected the Island on 21 April 1941 with 15 incendiaries hitting the Island and were successfully dealt with and the Island straddled with a number of High Explosive bombs which caused some blast damage but no injuries to the Garrison. By this time the Royal Artillery had taken over the manning of the Searchlights from the Royal Engineers.

May 1941 saw the Coastal Artillery reorganised again. With 407 Coast Regiment renamed 566 Coast Regiment Royal Artillery. RHQ remained on the Island as Fire Command and the newly renamed 159 Battery manned the 6 inch Breech Loading Guns with 160 Battery manning the 12 Pounder Quick Fire Guns. April 1942 saw 160 Battery moved to Mount Batten with two of the 12 Pounders from the Island followed in August. This coincided with the arrival of the twin 6 Pounder Guns which were manned by 195 Battery who arrived from Spurn Point. The final upgrade to the armament on the Island happened in June 1943 when a 40mm Bofors Anti Aircraft gun arrived on the Island for local defence against low flying aircraft rather than high altitude bombers. At the same time the Artillery Regiments were reorganised again with 566 Regiment being absorbed into 568 Regiment. The 6 inch guns were placed into care and maintenance – they were just maintained rather than manned. The reason for the reorganisations and draw down of manpower were for a couple of reasons. Firstly the new guns were more powerful and had an increased rate of fire meaning less were needed, the number had reduced from 7 guns at the start of the war to two reducing the manpower needed to man them. On top of that it was increasingly clear that the threat was from the air and the Island was a defence against torpedo boats along with the other forts in the area again reducing the threat and therefore guns and manpower needed to counter the threat. The guns on the Island finally engaged the enemy on 13 June 1944 when the 40mm Anti Aircraft Gun got off 8 rounds against an enemy plane all of which missed in the Islands only action of the war.

With Operation Overlord being successful in June 1944 arrangements for another draw down to district rather than war establishments began. As with World War One the Island saw little action with deterrence against the seaborne threat working and the Germans deciding not send the Navy against the Plymouth Defences. Although the Island remained a working Military Fort until 1957 it reverted to having a live in civilian caretaker and being maintained by a small Maintenance Battery based in Plymouth itself. The Island was demilitarised by the Royal Engineers from 1957 until 1961 part of which was done using an excess of Plastic Explosive (a favourite Sapper pastime) to demolish some of the fortifications. The Island was then handed back to the Duchy of Cornwall in 1961 who subsequently granted a lease to the National Trust for the establishment of the Adventure Centre on the Island which opened in 1963.