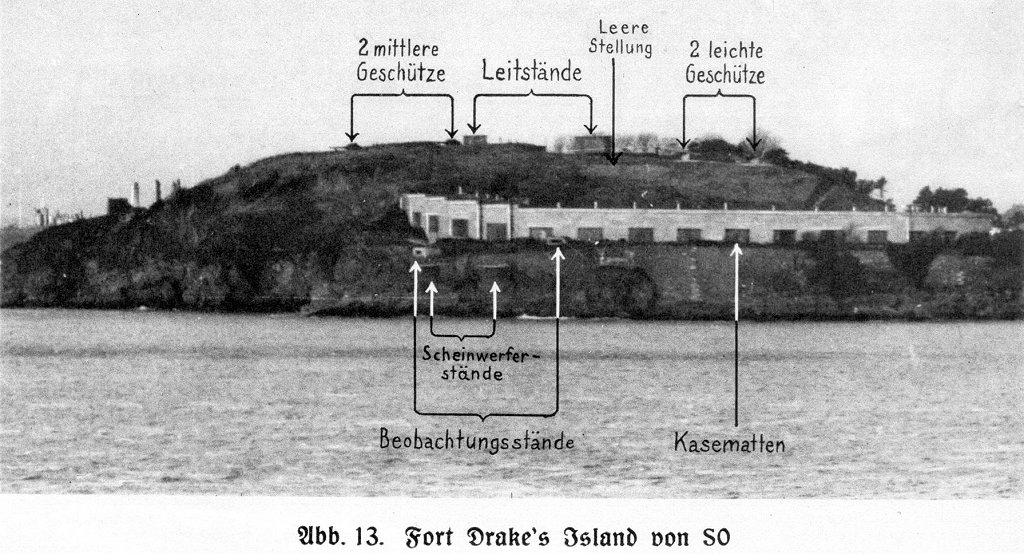 The Germans had used what were possibly tourist photographs to identify the defences on the Island back in 1938 and as international tension increased in 1939 the British Government finally realised war with Germany was becoming a distinct probability. The jetty on the Island, which still stands, was built. The Government emergency plans included training Sea Scouts as Coast Watchers to give early warning of enemy raiders. In June 1939 sixty Plymothian Sea Scouts under the guidance of the Coastguard took part in training and exercises over a weekend on the Island.

The Island was to defend the Naval base at Devonport against fast E-Boat (Torpedo Boat) or submarine raiders and wasn’t an integral part of the air defences. At the outbreak of the war there were 2 x 6 inch Quick Fire Gins and 5 x 12 pounder guns with some Bofors Anti-Air Guns. There was already radar on the Island and after war was declared the gun sites were strengthened and additional concrete bunkers built. Two minefield Control Posts were built which were able to remotely detonate mines laid in the Sound. This was to be dual purposed to defend against invasion and as an anti-submarine measure. However it doesn’t appear the plans were followed through as no mines were laid in the Western Approaches during 1940 and later minefields were laid further down the coast. It’s possible either lack of resources, most defensive naval minefields were laid in the Dover Straits, or the threat from submarines this close in rescinded after the Battle of Britain was won and it became clear the Germans were using the Luftwaffe against Devonport and Plymouth was the reason behind not laying the minefields. It is probable it found use as a general observation post during the war.

There were 3 coastal artillery searchlights in front of the casemates to the East of the Island and twin 6 pounder gun emplacements were also installed along with a couple of Lewis Gun emplacements. The guns were partly if not wholly manned by 159 Battery of 566 (Devon) Coast Regiment RA. The Royal Garrison Artillery who manned the Island during World War One were absorbed into the Field Artillery in 1924 and Coastal Defence was the responsibility of the Territorials from then on. Rails were also added to the gun emplacements to aid the movement of the ammunition trollies that fed the emplacements. A number of Nissan huts were added and the casemates were converted for various uses including accommodation and workshops. The anti-submarine dragons or sharks teeth at the back of the Island were upgraded from rubble filled gabions to reinforced concrete and can still be seen at low tide. The anti-submarine boom was still in place at the back of the Island to close off the channel when necessary. At the start of the war the garrison consisted of the Artillery, 13 Officers and 144 OR’s and a detachment of that fine body of men, His Majesty’s Corps of Royal Engineers with 3 Officers and 49 ORs that bought a touch of intelligence and class to the Island. Electricity both DC (Searchlights) and AC (Radar) was supplied by generators and water was still bought over by boat with the other supplies and materiel required by the Island.

For the local population the Seven O’clock regulars had their swims to the Island cancelled and the local crabbers found large areas of the Sound were out of bounds to them. However the restrictions on the Crabbers were relaxed and they could obtain special permits to lay crab pots around the North of Drake’s Island from late 1940 onwards.

By 1941 the Garrison had increased to its peak of 490 men on the Island and the following year the 12 pounder guns were removed and replaced by more twin 6 pounder guns. In 1943 the old casemate guns, the 9 inch 12 ton guns from 1870 that had been pushed onto the Eastern foreshore in 1905 were recovered as scrap metal for the war effort.

As with World War One it was a relatively quiet time for the Island. The defences were all geared towards sea borne defence against U Boats and torpedo or E Boats. However the Germans used the Luftwaffe rather than submarines and torpedo boats to attack Plymouth and Devonport as planes were cheaper and more effective so the Island wasn’t a direct target. Although the Island had a couple of small anti-aircraft guns for local defence the main AA Battery’s were in a ring 20 miles outside of Plymouth so they could attack enemy bombers before they dropped their bombs. So although the local AA guns almost certainly fired during the Luftwaffe attacks, a seaborne threat to Devonport never materialised and the main guns were never fired in anger. The Island was hit by 31 incendiary bombs and a few High Explosive bombs meant for Plymouth or Devonport during the Blitz but only one soldier was slightly injured throughout the war. That happened when a stray High Explosive bomb meant for Plymouth or Devonport hit the island and blew some tiles off the roof of one of the buildings and hit a Gunner in the lower leg. This in fact was the only injury sustained on the Island over both World Wars that were a result of enemy action. It’s quite difficult to unearth some of the details and personal stories from World War Two as this was an era of quite heavy censorship unlike World War One which had more information available. Indeed prior to World War One there was no censorship and all details appeared in the papers. However I am hoping to have a chat with an Artillery Vet who served on the Island during part of the War in the coming months so will update you all once we have met which I am very much looking forward to.