THE START OF WORLD WAR ONE 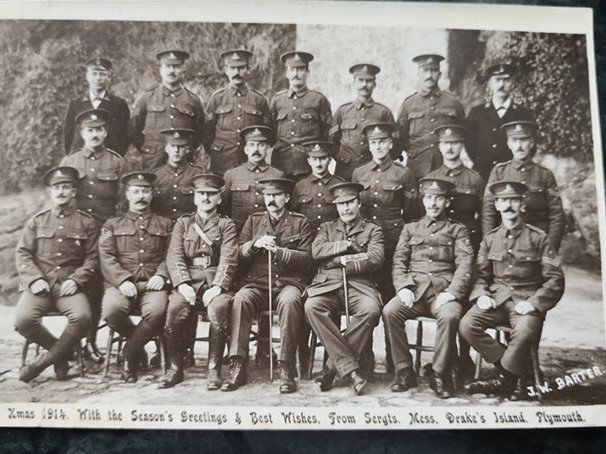 The last major exercises to test the defences involving the Garrison was a Torpedo Boat and Destroyer attack on Devonport. The Gunners successfully attacked the targets illuminated by the Royal Engineers and it was judged the defences were ready. Tensions had been building for some time and the UK then declared war on Germany on 4th August 1914 in response to King Albert of the Belgians call for assistance under the Treaty of London. The immediate reaction in Plymouth was that the military designated parts of the Sound as prohibited areas. These mainly covered the two entrances at the Breakwater back to and including Drake’s Island. Fishing by boat was also banned in the Sound affecting the livelihoods of the men employed in the local fishing industry. Notices in the Newspapers and Docks informed the public that any infringement of the prohibited areas will entail most serious results and were signed by Capt A. Hughes D’aeth RN. The anti-submarine boom at the back of the Island was kept closed unless friendly ships were entering or leaving the Sound using that channel.

At the start of the war the Garrison stood at 3 Officers and 59 Other Ranks. This was quickly raised to 4 Officers, 11 Sgts, 2 Trumpeters and 134 OR’s with Colonel Graham as the Commander of the Island. The Island was manned by 45 Company Royal Garrison Artillery with the Lower Battery of 3 x 12 pounder breech loading guns, a Main Battery at the top of the Island with 3 x 6 inch breech loaders and the casemates with another 3 x 12 pounders and Royal Engineers from the Devon Fortress Volunteers who manned the searchlights. The 12 pounders were moved, aimed and fired by the gunlayer who stood on the left of the gun whilst the remaining 3 of the gun team reloaded the gun. It would fire 12 rounds per minute with a well trained gun team using a combined cartridge and shell round. The 6 inch gun was an older variant and took a larger gun team to operate as it used separate cartridge and shells. This took longer to reload and would only fire 7 round s per minute with a good gun team. The gun teams slept close to their guns and the unused casemates were converted to generator rooms, workshops, stores and temporary accommodation. Both the guns and searchlights had interlocking arcs with their neighbouring forts to provide complete illumination and fire cover for the whole sound. Interestingly a photo of the Sergeants Mess in 1914 shows 2 Petty Officers. These could be Liaison Officers ensuring the Garrison was aware of friendly shipping movements, it wasn’t unknown for the Royal Regiment of Artillery to lob a few shells at its own side in the confusion of war or they could have manned Torpedo Boats that were anchored near the Island as part of the defences.

Additionally a detachment of the 1/4th Wiltshire Regiment, a territorial unit, provided a guard on the Island arriving on 5th August for a few months until it became clear the fighting would be abroad. The Wiltshire’s departed for India in October 1914. However Lt George Blick wrote of the Battalion’s time in Plymouth “The next morning (6th August) we had our first glimpse of the realities of war when three large German liners captured by the Navy were bought into the Sound. The dim impression of Plymouth left on our minds is one of alarms, excursions, rain, guards and more guards”.

The numerous alarms early on in the war Lt. Blick spoke of also made people were quite suspicious of strangers and two tourists from Grantham, Mr Taylor and Mr Hindhaugh were detained by a Bombardier as they were taking pictures of Drake’s Island from the Hoe. The Police were called and arrested them on suspicion of being spies. The Police did things quite differently back in the day and even though we were at War after the suspected spies were questioned they were paroled for lunch and tea – they could leave the Police Station unaccompanied – although their camera was not paroled. Whilst out on Parole the Chief Constable phoned his counterpart in Grantham who confirmed the two “were both respectable citizens, and quite above suspicion as aliens”. Subsequently the pair were released although the photograph negative was destroyed. This was not an isolated case in the early months of the war and apparently two clergymen were arrested at the same time for “loitering in the vicinity of the fortifications” but were similarly released.

Britain’s strategy as the foremost Naval power was to blockade Germany in the North Sea aimed at preventing supplies reaching Germany and the smaller German Navy accessing the Atlantic and threatening Britain’s Imperial supply lines. Although U boats did harass British shipping a combination of the strong defences guarding the Sound and Naval strategies of both the UK and Germany meant there were no attacks on Devonport early on in the war. Next week I’ll take a look at how the Island settled into its role defending Devonport throughout the War.