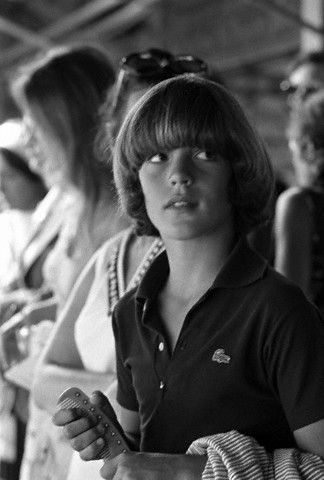 President John Frederick Kennedy (JFK as he was more usually known) of the USA was assassinated in 1961. The year before his wife Jackie gave birth to their son John Frederick Kennedy Jr who was known as JFK Jr. In 1971 JFK Jr with his cousin Anthony Ridiziwill stayed on the Island as residential students for two weeks.

Apparently JFK Jr was a fairly average academic student, it turned out he had dyslexia like his father, but was keen on and good at Adventurous sports rather than traditional ball sports and was seen as risk taking and adventurous even at a young age. One of the things dyslexia can affect is hand eye coordination which may account for that. Jackie, his mother had also remarried to the Greek Shipping magnate Aristotle Onassis in 1969. These things may help understand why JFK Jr turned out to be a bit of an adventure loving thrill seeker, and one of the things Jackie did to try and keep him occupied was send him on adventure holidays. His visit to Drake’s Island was the first of a number of such trips during his younger years.

Jackie wanted his time on the Island to be as normal as possible. The Secret Service, who still protected the Kennedy family were kept away from the Island and had to keep watch from the mainland opposite. There was only one incident during the trip, during one of the days sailing with one of the Island Instructors in the Sound a fast boat packed with armed men was speeding directly towards the boy’s boat. As they neared the boat they were intercepted by a secret service launch, it turned the armed men were Her Majesty’s Royal Marines on a training exercise in the Sound and fortunately no shots were fired!!

It was the first season that the Centre had 65 residential places, up from 25 previously and the all the places were taken during JFL Jr’s stay. The boys would have been amongst the youngest there as they were just over the minimum age. Originally a boy’s only centre by the time JFK Jr arrived girls were staying as well. In addition there would have been day students, mainly from the local Plymouth schools taking part in various activities as well as day trippers so it would have been a busy old place and I can only imagine what was going through the minds of the Secret Service as they watched on from the Hoe. JFK Jr and Anthony shared a dormitory with 6 other boys. Whether the other students knew that they were sharing a dorm with the son of a President of the USA I don’t know but a letter from Jackie to the Warden, Phil Kemp does say the two of them were able to “meld into the group without being singled out by curiosity or special attention” which suggests the other students were in the dark or forewarned to be very discreet. The letter goes onto say that Phil Kemp was besieged by calls from the press towards the end of their stay which suggests word did get out somehow. The boys were treated as all the other residential students and took their part in the daily chores roster. In addition to sailing the boys took part in Rock Climbing, Canoeing and hiking but apparently sailing was their favourite. Jackie’s letter also mentions that the two may return the following year for a week long sailing expedition, however they did not return.

The letter reads “Dear Mr Kemp, I owe you many thanks for johns stay at Drake’s Island. You handled his visit with such tact and privacy. I am so deeply grateful. It is the first time he has ever been able to meld into a group, not singled out by curiosity or special attention. It did hi a great deal of good and he truly enjoyed it. He kept a diary, so I have read what he did each day, and am most impressed by your program. I hope John and Anthony will return next year – perhaps for a week longer. The counsellor, Sam, who John liked so much, told him that one could sign up for a weeks sailing expedition, which is what he would like. Would it be too much trouble to ask you to send me Sam’s last name and address? as John would like to write to him. I am afraid that you were besieged by telephone calls from the newspapers at the end. How sensitively you handled them. I know you will be just as elusive, should they ask you if John and Anthony will be returning next year. I do hope one day to have the pleasure of meeting you to thank you in person for what you have made possible for my son. Most Sincerely, Jacqueline Onassis”

Although the letter also says the boys enjoyed their time it seems to have been a bit of a mixed experience with the activities and personal interactions being just grand but the living conditions and daily routine not so appreciated. A few biographers, both of Jackie Kennedy-Onassis and JFK Jr briefly mention his time on the Island. One said that JFK Jr rang his mother to complain about the living conditions and another writing that Jackie wrote to Rose Kennedy, JFK Jr’s Grandmother, saying that the camp was “Spartan and primitive” and it sounded as if they were on a Prison Camp but “it should do him good”. Overall though the biographers seem to agree that JFK Jr found it was a beneficial and exciting experience. Although the boys didn’t return to the Island the next year JFK Jr did visit Kenya in Africa to do a pioneering and leadership course as well as taking part in activities at other adventure centres in the USA and as a 16 year old spent time doing disaster relief in Guatemala after an earthquake. Amazing to think our little piece of volcanic rock helped in a small way to mould the character of an American President’s son.