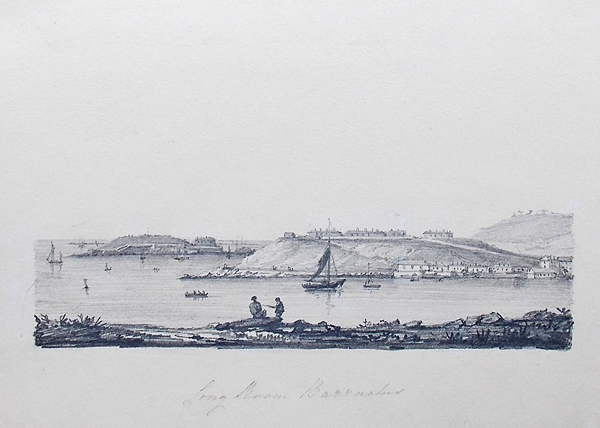 1850 saw a cunning plot developed to smuggle a ship load of Brandy onto the Island. It was widely reported at the time and although some details differ slightly in the various newspapers the general details are the same and are supported by the court reports. The Master Gunner at the time was Sergeant Major David Edmunds and the canteen manager Mr Charles Couch. Plymouth was a major port for the import and export of goods with its own customs house, officers and boats. It was a busy time with merchantmen coming and going on a daily basis and smuggling to avoid revenue duty was common. Nantes was one of the French Ports which was well known for smuggling and arrangements could be made there to hire a ship to smuggle in goods and the merchantman involved in the attempt was a French sloop of 23 tons, the Virginie from that very port of Nantes with a crew of 5 carrying 250 tubs of Brandy for import. Exactly how big a tub is difficult to determine as some reports mention kegs as well as tubs and a tub could refer to different sizes of barrel. A keg would be around 15 imperial gallons but a common size of the time, a half anker was 6 gallons. The brandy was reported as being of 42% overproof.

It’s not clear how the Virginie was contacted or whether it was a pre planned operation out of Nantes or a chance plot devised when the Virginie arrived in Plymouth. My guess is whichever way the plot came about it started with Mr Couch as he, as the Canteen Manager would have the contacts and time to make the arrangements. He would also have space on the Island for storage that would not be scrutinised as much as the military stores. The Master Gunner, Sergeant Major Edmunds would have the manpower to recover and move the tubs but this is only guesswork as the newspapers don’t report who planned the smuggling or the details.

The plot was put into operation on evening of Monday the 6th May 1850. It’s not clear how the tubs were bought ashore. A common way of smuggling was to link the tubs together by rope then lower them overboard with a float so they could be recovered or allow them to be washed up on the shore to give an element of plausible deniability to the smuggling as the tubs were merely flotsam just washed up. However both would take a fairly long time and in the second case there would be an element of chance involved that the tubs would wash up on the rocks rather than the beach or simply be carried away from the Island by the strong tides in the Sound. The most likely method is they were landed on the Island by boat. This is supported by other reports that the Customs Officers received intelligence, possibly from a Royal Marine sentry on duty at the Long Room on the morning of the Tuesday that tubs were being unloaded on the Island.

What is definite is that Mr Rae, a Customs Official seized between 20 and 31 tubs of brandy on the beach, the number of tubs reported varied between newspapers. The excuse given by Sergeant Major Edmunds was that the brandy had just washed up and the garrison was collecting it to hand over to the Customs officials. However Lt Cosgreave RN of the Coast Guard noticed that most if not all of the Gunners were inebriated and decided to search the Island. In Sergeant Major Edmunds accommodation they found one tub of brandy at which point the Master Gunner confessed to having 4 more tubs. Some reports say the 5 tubs were in an Artillery store controlled by Edmunds, either way he personally had 5 tubs. A further search revealed between 50 and 75 more tubs hidden in the attic of the canteen, the number again depends on which newspaper report you read. Mr Couch the Canteen Manager and possible mastermind had by now disappeared leaving the Master Gunner to carry the can.

The Virginie was also seized and Sergeant Major Edmunds taken into custody at Stonehouse Police Station whilst the case was prepared. Edmunds, who had 25 years service in the Artillery, denied having any part in bringing the tubs onto the Island at his subsequent trial but was nevertheless found guilty. He was fined £100, roughly £13,500 today but as he couldn’t pay and defaulted on the fine he was sent to prison for 6 months. Mr Couch the Canteen Manager presumably just went on the run and settled somewhere else. He definitely didn’t stay on as the Canteen Manager as he was immediately replaced by a Mr Butchers of Stonehouse and was tried in absentia. He was represented by a Mr J E Elworthy who submitted that his client was not on the Island and there was insufficient evidence to convict so he should be acquitted. However the judges were not convinced and fined him £899 but I can’t find if he was ever found to pay the fine.

One reporter was so disgusted he wrote the following editorial “I’ve have seldom had to record a more daring breach of the revenue laws than this case exhibits. The foreign brandy was boldly brought into the harbour, where the Queen’s ships are always lying, landed on an island which is a military station, under strict surveillance of persons holding her Majesty’s commission, and where no civilian resides but the canteen keeper, and off which, at the distance of a cable’s length or two, is generally moored revenue cutter. The kegs were found not only secreted in the canteen, but actually in the Queen’s stores, under the lock and key of a well paid Non-Commissioned officer.”

Next week accusations of bullying and slander amongst the Officers of the Garrison again in 1850. It developed into a national scandal that was widely reported in the newspapers and even involved the fathers of both the main protagonists.