THE PALMERSTON FORTS OR CASEMATES 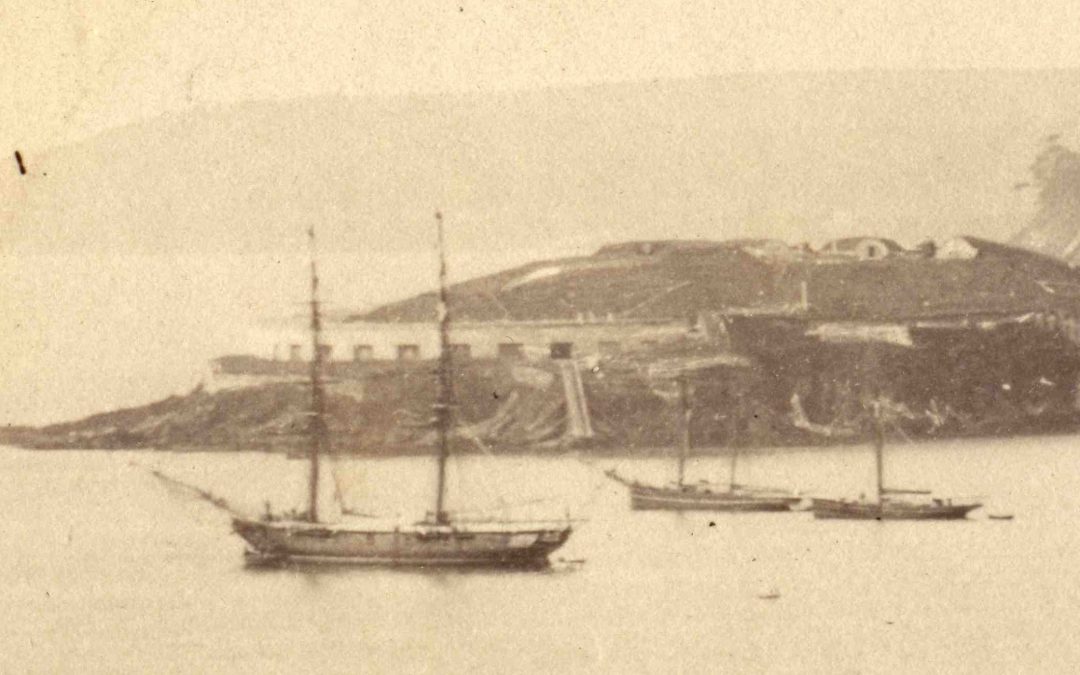 The 2nd French Empire under Louis-Napoleon III had succeeded the 2nd French Republic in 1851. His foreign policy was to reassert French influence and he allied with Britain against the Russians in the Crimean War. However after that, from 1856, he saw Prussia as the main threat. He especially did not want a unified Germany. However Britain was concerned by French expansion and it’s increased Navy. In particular the French Warships had increased their armour and greater firepower. Although cannon power and range had been improved by advances in metal working with steel barrels now able to use greater powder charges and fire larger shells they hadn’t yet been deployed on land. Against this background the UK conducted the 1859 Royal Commission on the Defence of the United Kingdom in 1859. Part of this programme of inspections saw Col Wright RE, Capt Stace RE and Maj White RE accompanied by RA and RN Officers of the Commission visiting the Island and other parts of the wider Plymouth defences area in June. Their Report, published shortly afterwards recommended the existing battery in the centre of the Island be replaced by 5 x 12 in muzzle loading guns and a new Battery of 21 x 9 in Guns in a Stone casemate arc with iron shields be constructed on the east of the Island covering the passage from the breakwater. It also recommended an underground magazine and tunnel system to support the new batteries. The state of the barracks was described as dilapidated. Numerous other works at other locations including Forts Picklecombe and Bovisand together with Mount Staddon as the outer sea defences, Mount Edgecumb, Devils Point, Eastern and Western Kings as well as the Island for the inner sea defences. There were also considerable works recommended to the north of Plymouth for the land based defence of Devonport should an enemy land further up the coast and march on Plymouth.

The commission’s recommendations were accepted by Parliament and by May 1861 a Stonehouse company, Messrs Hubbard had been commissioned for the works on the Island which were to begin immediately. The granite blocks forming the front of the casemates weighed between 1½ and 4 tons, the iron shields were to be 12ft wide by 8ft high and 10 inches thick with 3 ft by 2 ft openings for the guns. The rear of the casemates were constructed of rubble masonry with brick arches. The length of teach casemate was 36ft and the guns were spaced at 24ft. The roof was 3ft of concrete covered with 2 x ½ inch layers asphalt.

The works were designed by the Royal Engineers and would have been overseen on a daily basis by a Royal Engineers appointed Clerk of Works. A number of high profile inspections would have taken place and in 1863, 1867 and 1870 the Commander-in-Chief, Field Marshal HRH Prince George the Duke of Cambridge carried out personal inspections. By the 1870 inspection the works had been complete except for the Iron shields and placement of the guns. Unfortunately that year Robert Launder who was working laying asphalt with his father Henry on the roof died. It was November and long hours were worked by the contractors. Robert was sent from the roof to fetch water to boil for breakfast at 0830am but tripped over a granite block and fell 20ft to his death.

Starting in 1861 the Upper Battery constructed around 1780 was also now demolished and replaced by a new Upper Battery to house five 12inch 25 ton Guns. These were in 5 fixed firing points or emplacements with earth covered protective walls between the emplacements which also served as protective cover for the upper level of underground magazines which ran in an arc below the emplacements The Upper Battery was linked to the Barracks by a ramp that ran up the incline. The Island was linked either by flat passageways or by ramps and not steps to ease the movement of ordnance and stores around the Island. These were heavy, a single shell for a 25 ton gun would weigh up to 600lbs (around 272kg) and stores were placed on rollers or in wheeled cradles and hauled around the Island by rope assisted by hauling rings places at ankle height around the Island.

In 1870 or 1871 the Royal Engineers had constructed a gun wharf in front of the third casemate from the north east (facing Plymouth) capable of taking both the new 9 inch 12 ton for the casemates and 12 inch 25 ton guns for the Upper Battery. The original report written by Lieutenant H. Dension RE credits Lieutenant Hare RE as both the designer and constructor of the wharf. The wharf was made out of red pine with two walkways although only one was finally used. The guns were bought across by barge or lighter three or four at a time at high water. They were unloaded onto the wharf and parbuckled using thick 9 inch ropes up the slope to the casemates. This was assisted by the use of a combination of movable Gyns, blocks and tackles, skids and handspikes to assist forward movement and prevent the guns from sliding back. Once unloaded each gun would take around 45 minutes to get up the incline so each barge would take a full morning or afternoon to unload. Once up the incline the gun was placed on rollers to be moved to its final location. The Iron shields still hadn’t been fitted so the guns could be bought through the open face of the casemate. By 1871 13 of the 9 inch guns were in position.

The carriage and platforms for 25 ton guns were at Devonport by now and in 1872 the guns for the top of the Island were ready to be delivered. It isn’t clear when exactly the Iron Blast Shields were fitted but it was no earlier than 1870 or later than 1872.

Whilst the casemates and Upper Battery were being constructed the underground magazines and tunnel complex were also being constructed to serve both the casemates and new upper battery. There were two levels of tunnel each with separate magazines for cartridge (powder bags) and shell. The lower magazines were directly behind the casemates. These consisted of 5 main magazines that were linked by tunnels to the forward magazines that were in an arc behind the casemates and opened onto the pathway by large windows or doors. A main ammunition tunnel linked the two ends of the arc containing the forward magazines. There was also a covered way constructed between the west of the Island where the barracks were and the east where the casemates were. Above this lower level were the upper underground magazines that supplied the 5 guns of the upper battery. These were located above the south side of the main lower level magazines and connected by two hoists. The Upper level followed an arc with the magazine rooms linked by a passage. Each Gun emplacement had two magazines, one for cartridge and one for shell and hoists linked the magazines to the gun emplacement above it. The underground passageway had access to the Upper Battery by means of a number of steps and to the west of the Island by an entrance part of the way up the slope to the upper battery. Being enclosed on both levels gunpowder particles would have got into the air causing an explosive hazard so potential sparks and naked flame had to be eliminated. There was no electricity so light was supplied by oil lamps in enclosed glass recesses in the walls. These were accessed at the back by lighting tunnels behind the main magazine rooms so the rear of the recess would be opened from the lighting tunnel, the lamp lit and then the rear of the recess closed. The lamp would then provide light to the inside of magazines and also the tunnel. Sentries would have been placed each entrance to the tunnels and those working inside would change into canvas Indian type moccasins and canvas uniform so no redcoats or hobnail boots or marching around with bayonets fixed. Those working in the magazines would have surrendered matches, pipes, tobacco and anything that could cause a spark or flame at the entrance before entering for their duty.

Both the 9 inch and 12 inch guns would have crews of 8 and could be augmented if more men were available to fetch ammunition forward. The guns had a reload time of around 4 to 5 minutes. Both types of gun were mounted on carriages and mineral oil was used to lubricate the moving parts. To assist the traversing of the guns blocks and tackles were used. An 1871 Royal Artillery report specifically states the 9 inch guns on the Island were traversed using two tackles each of one double and one treble block and used 16 fathoms (nearly 30m) of 3 inch rope and required 6 men to traverse them. The effective range would depend on the armour of the target but could penetrate 15 inches of steel at 1 km with a shell weighing about 272kg fired by a charge of about 38kg of powder producing a velocity of 400m per second. The casemates would also have rope mantlets attached to the iron blast shield that would be closed to prevent hot embers and discharge blowing back into the casemate. The casemate guns would have fired sequentially rather than in one broadside to give the most effective chance of hitting the enemy ship, reloading and having a second chance to fire. The guns themselves had angled graduation marks at the rear so the correct elevation could be set determined by the size of shell, charge, distance and tide level.

The whole national fort building programme was hugely expensive and subject to constant review by Parliament although the Plymouth defences were expected to be within estimate a number of larger works were over budget. However by 1870 the Emperor Louis Napoleon had been defeated by the Prussians and was their prisoner which meant the threat had largely passed before the defences had been complete or all the new guns delivered and the fort building programme was scaled back. Although the works on the Island were completed the full complement of 9 inch guns never arrived. Many of the land based forts were never started – for example only one of four planned keeps in Plymouth, the one at Eggbuckland was ever constructed – and of those completed few received their planned complement of guns. The expense together with the fact that Louis Napoleon was defeated, ironically he was given refuge in Great Britain and died at Chislehurst in Kent, and the guns would be outdated within the next 20 years meant the Palmerston Forts also became known as the Palmerston Follies. As the guns were replaced in later years the 9 inch casemate guns were simply tipped out onto the foreshore until they were recovered in 1943 as scrap for the war effort. The 12 inch guns were buried and found again by accident in 1978 by the Adventure Training Staff. 59 Commando Squadron Royal Engineers, at that time based in Crownhill Fort came down and recovered them although only 4 of the original 5 guns were found. One of the guns was subsequently mounted on a carriage constructed to an original design and fired by the Lord Mayor in 1983.