THE MOST INCREDIBLE JOURNEY THROUGH PLYMOUTHS PAST 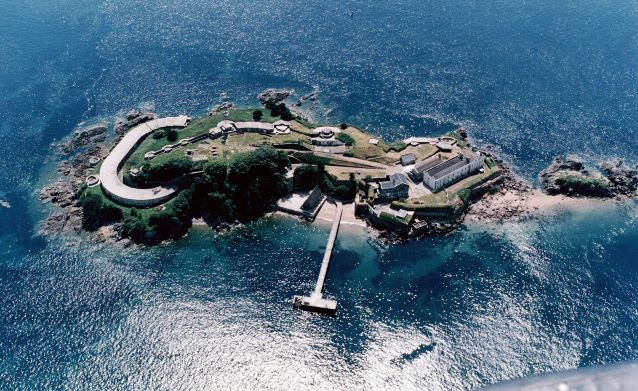 I have been very lucky to have spent the last couple of years as Drake’s Island Warden not only being able to look around the Island but also researching a fascinating place that played a key part in the history of Plymouth and Great Britain. Morgan, the owner and I are keen to share with you the many fascinating stories of the Island over the centuries in a series of blogs that uncover the Island’s amazing history. To give a very brief taste of the Island’s past here is a short history of the Island.

Situated in Plymouth Sound between Plymouth and the Cornish Coast it started life some 400 million years ago as the fossilised remains of marine creatures which became Devonian Limestone. A little later, roughly 300 million years ago, it was an area of volcanic activity with lava and ash fusing with the limestone to form the geology of the Island. The last eruption in what is now the Sound was believed to be 250 million years ago and fossilised Rhyolite lava can still be seen in nearby Cawsand Bay. It only became an Island around 3,000 years ago when rising water levels finally submerged the shallow ridge to Cornwall permanently.

The reign of Henry I saw the first mention of a building, a chapel, on the Island in 1135 although it was probably built earlier. The Island gained importance as a strategic defensive point in defending Plymouth when Henry VIII developed the English cannon industry which gave guns the range and power to sink enemy ships. In 1549 the Island was a refuge for Protestants during the Western or Prayer Book uprising and subsequently became a fort when the chapel was demolished and its stone recycled to construct Tudor Artillery Towers in 1550. In 1642 the English Civil War broke out between the supporters of the King and Parliament and the Island played a key role in helping Plymouth which had declared for parliament withstand a 4 year Royalist siege. After the Restoration in 1660 Charles II used the Island as a state prison for 25 years housing a couple of parliamentary military commanders and local non-conformist ministers whilst it maintained its role as a fort. Just before Capt Cook’s second circumnavigation of the World in 1772 the Island was used briefly as an observatory and played a role in successfully testing the first sea chronometers which solved the problem of determining longitude at sea. A major update of the defences occurred in 1860 with the building of the Palmerston casemates for Drake’s Battery on the Island housing technologically advanced guns with the power to sink the new Ironclad Battleships. Further advances in technology to breech loading guns led to more defence upgrades with three gun batteries of three gun emplacements each being built over 1898 to 1901 and searchlights being added to the defences. The Island played an active role in defending Devonport from a seaborne attack during both World Wars before becoming an Adventure Training Centre in 1963 as the military moved out. The end of the Adventure Training Centre came in 1989 and the Island was first sold in 1996 then again in 2019.

The stories of the people who lived and worked on the Island are as fascinating. There’s the people who engineered the Island, Frederico Genebelli an Italian who was Elizabeth I Trenchmaster or Engineer, Col Lily, Lt Col Dixon and Maj Jervois all of the Royal Engineers who at various times designed the buildings and fortifications on the Island and Lt Hare, another Royal Engineer who designed the means to lift the guns, weighing up to 25 tons to the casemates and the top of the Island. Naturally there is Drake himself who provided some of the first guns on the Island, there’s the first Governor Fernando Gorges appointed in 1596 who was also one of the original founders of the American Colonies, Sgt’s Fuge and Hancock who foiled the plan by the Governor, Sir Alexander Carew to hand the Island to the Royalist forces during the Civil War. Many ordinary individuals in the garrison performed feats of bravery in saving people from shipwrecks but were also involved in somewhat shady dealings involving brandy smuggling and selling of military supplies. There’s the funny with Gunner Harris returning from a stores run to Royal William Yard slightly inebriated and missing the Island ending up 27 miles down the Devon coast at Start Point and the sad with accidental deaths through drowning the Garrison as well as a mutiny, attempted murder and at least one duel.

Although mainly an Island of fortifications there was science on the Island, Richard Bayley from the Royal Greenwich Observatory took his readings from the top of the Island, John Day became the world’s first submarine fatality in 1774 when testing his prototype diving machine and Mathias Dunn a local marine expert wrote many papers in the late 1800’s and early 1900’s on the wildlife in the Sound including why the local crab and lobster industry collapsed in the early 1900’s due to the overfishing of conger eels.

And there are also the enduring mysteries and myths surrounding the Island. The tunnels, did they ever exist? The prison, where was it? Was there an Oubliette? Why was it called St Michael’s and then St Nicholas Island before Drake’s Island? When did it start being called Drake’s Island? How did they get the guns on the Island? Did the guns ever fire at enemy ships? Did the Council ever own the Island? I will of course attempt to answer any questions you may have about the Island.

I will explore all these stories with you and more. There is a more detailed timeline in the next blog for those who want a chronological reference of what happened on the Island and I will be covering all those events in future blogs. I hope you will enjoy reading about the Island as much as I have enjoyed and continue to enjoy researching and writing about it.