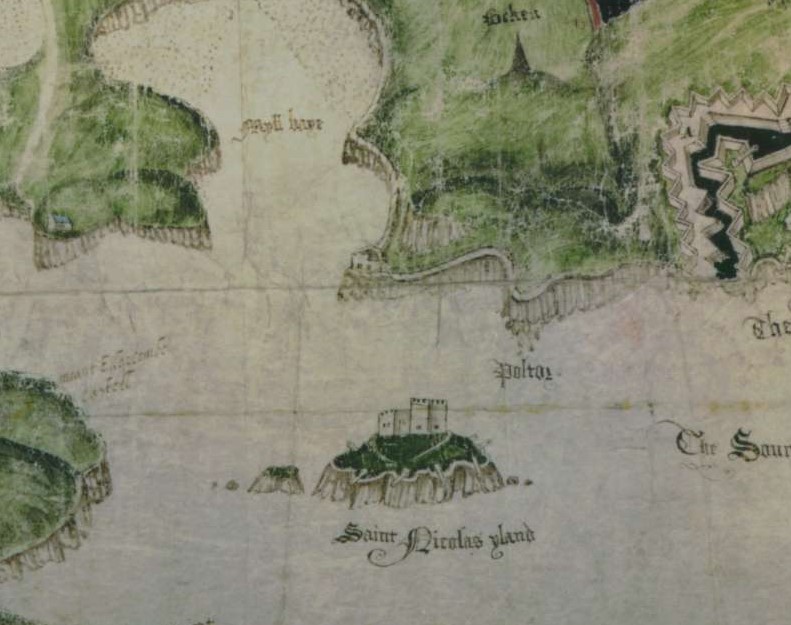 Even though there was a still a threat to England from Spain battles for power between different factions continued at different levels in England affecting Plymouth and the Island. At a national level this involved the succession between Protestant and Catholic factions if, as seemed likely, Elizabeth should die without an heir. Additionally the Earl of Essex was deemed as having undue influence over Elizabeth I by her principal secretary Robert Cecil. Essex was the patron of Sir Ferdinando Gorges and secured him the appointment of Governor of Plymouth and the Island in 1595. The Corporation of Plymouth was still trying to exert its influence over the Crown and wanting to find a way to have the right to appoint the Governor and with it greater control of Plymouth and the Island. These attempts, some of which seem fairly petty, seem to involve making it difficult for Gorges as Governor to carry out his duties and at one stage Gorges had to get the Privy Council (equivalent to the modern Cabinet) to drop a case bought by the Corporation against Sgt Hales, who was part of the Garrison and therefore under Gorges command, for using the town stocks as fuel. In 1599 Essex having seen his influence with the Queen diminish enlisted Gorges in a plot against the Queen to try and re-establish his status. Gorges couldn’t outright refuse his patron Essex but extricated himself from the conspiracy and testified against Essex in his treason trial in 1601. However Cecil had Gorges imprisoned on the basis of his earlier involvement in the plot and he was replaced as Governor by Sir Nicholas Parker. In prison Gorges composed his “Brief answer to certayne false, slanderous, and idle objections made agaynst Sir Ferd. Gorges, knight”’ and was pardoned in 1602 through the influence of his new patron, Sir Robert Cecil, who had funnily enough persuaded him to testify against Essex earlier. Cecil subsequently got Gorges his old position in command at Plymouth and the Island back in 1603 securing the Crowns and his influence in Plymouth. Gorges returned to find 300 men at the fort and on the Island due to invasion scares and work on the fortifications had begun.

That work had been designed and was being carried out by one of the Queens Trenchmasters or Engineers, Federigo Giambelli. An Italian he was appointed by Elizabeth in 1588 to help combat the Armada. During the Tudor period Italians were the experts in fortifications. Italy was not a country as we understand it today but a series of City States often at war with each other or other countries, notably France and Spain. Hence they had become adept at developing defensive fortifications. It was common for their experts to make their money by being hired out by foreign powers. It also helped that Giambelli was decidedly anti Spanish and had helped defeat them at the Siege of Antwerp by developing fireships packed with gunpowder and shrapnel that were detonated using a timing device. Indeed it was out of fear that Giambelli had constructed the fireships that the English used against the Armada at the Battle of Gravelines that caused it to scatter and lead to its failure. As usual though the truth was more mundane and the English who could barely afford matches let alone sufficient gunpowder for the fireships and merely set light to some old ships and set them off towards the Spanish fleet. Back to the works on the Island which included repairs and new additions. Giambelli (sometimes spelt Jenebelli or Genibelli) wrote a number of reports to the Privy Council in 1601 and 1602.

In his inspection report of 1601 he describes “The parapet of the Island being 150 rods we find much decayed. The charge of reparation will be £140 (around £20,600 today).” A rod or perch was a surveyors tool that measured 5½ yards or marginally over 5 metres. So 750 metres of parapet wall seems to have existed by 1600 which would have been sufficient to cover all round the Island which is approximately 400 x 100 metres at low tide and a map of the time does indicate a wall all around the Island. He goes on to report “We find in the Island great want of lodging for the soldiers; there is walls for lodging begun fit to be finished amounting to £70 (around £9,800 today).” That the building had been started but not finished would be no surprise. Elizabeth I was notoriously tight fisted partly because England was financially weak and also the Corporation caused some delays as part of its ongoing struggle with the Crown and the Governor of Plymouth and the Island. Gorges went on “It is desired that there should be a place made at the Island to succour the boat that the soldiers have to fetch their victuals, for that for want thereof by the extremity of the weather the boat doth either perish or drive away, The charge will be £25 (around £3,500 today).” The Island would have been more susceptible to bad weather as this was well before the breakwater was built and this appears to be an addition to the “great platform” built a few years earlier. Giambelli was granted some funds to start work but this was hampered by bad weather and in September 1602 he wrote to Robert Cecil the Queens Secretary “The 25th of August, having provided materials and workmen, begun to work on the houses in the island for the lodging soldiers as also the wall of the parapet about the island. But, indeed, the weather has been so unseasonable and stormy that it has much hindered my proceedings.”

Later in the year Giambelli reports on the work so far complete. “In the end of August last having made part of the wall of the parapet round about the Isle I desired the commissioners to come and view the work and with their approval followed the work til the midst of November. The said wall was finished. The parapet filled with good earth.” The parapet wall then seems complete by November 1602. The commissioners are likely to be Crown rather than Corporation of Plymouth officials as it is recorded that Giambelli had difficulty getting funds released from Elizabeth’s treasury and he needed the commissioners approval to continue his work. He continues “The three houses builded and covered, one being for the Governors lodging and the other two for soldiers, and the cannon provided for their beddings where need was.” The buildings now appear complete and would have been on the top of the Island near where the old centre Battery from 1898 and old guns are on the Island.

In the same report of 1602 Giambelli also states what work is still outstanding with costs presumably in an attempt to get funds released from Cecil. “The particularity of that which remaineth to be done – the harbour to keep a boat for which must be made a Quay 40ft long, 1½ft high and 10ft broad, with a crane to be made thereon for the Islands’ use and to hoist up the boat on the quay 60 perches at 6s 8d the perch and £5 for making the crane – £25 (around £3,500 today). It appears this may not have been complete as there was an ongoing dispute over the funds as Giambelli wrote to Cecil in December of 1602 “I understand to my regret that you suspected me of trying to put her Majesty to too great expense over the fort of Plymouth and the island of St. Nicholas by not finishing the work on the island.” By this time it was clear that the Queen was dying and Cecil was more concerned with a protestant succession by ensuring James VI of Scotland would be crowned James I of England on Elizabeth’s death. It seems that Giambelli received no more funds as in 1603 when a Carrack, an ocean going ship that could be used as a naval or merchant ship, was wrecked on the Island foreshore the Privy Council was requested to allow its timbers to be recovered and used on the fortifications of the Island. Elizabeth died in March of 1603 and was succeeded by James VI of Scotland who also became James I of England. Philip II of Spain had died 5 years earlier and his son Philip III realising that an invasion of England would not succeed took the opportunity to reach a truce with James that was formalised a year later in the Treaty of London that ended the hostilities between England and Spain. The peace opened a period of colonisation of the New World which the Islands Governor Ferdinando Gorges as a partner in the Plymouth Company took advantage of to become a founder of what is now the State of Maine in the USA. Next week the blog will about Ferdinando’s career both as Governor of the Island and his concurrent involvement with the New Colonies.