The Geraldine Lamb Story, a journey of a child of Drake’s Island 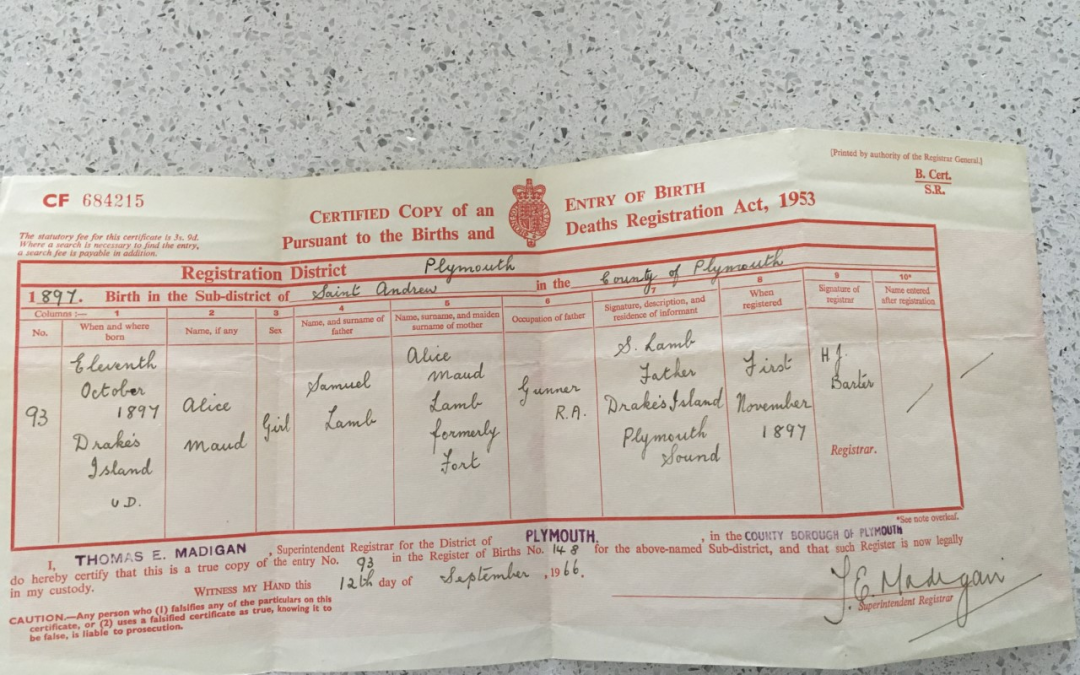 This Blog is about one of, or possibly the only birth on the Island. Back in October 1897, on the 11th to be precise, Alice Maud Lamb (formerly Fort) wife of Gunner Samuel Lamb of the Royal Artillery gave birth to a baby girl who they also named Alice Maud. Baby Alice would go on through her determination, skill and hard work to gain local and national fame through the Geraldine Lamb School of Dancing which she founded in Plymouth and is still going strong. Many thanks to Sue Cook her Granddaughter who now runs the school and has provided much of the detail. This is Alice “Geraldine” Lamb’s incredible story.

The Island would have looked a little different back in 1897 when Samuel was serving on the Island. The Barracks, Ablution Block and Governors House at the entrance would have looked no different to now although there would have been some additional small stores. The Outer defensive wall although altered a little for WWI and WWII would not have looked much different. Inside the Island the 13 of the casemates would have housed 9 inch 12 ton guns and the Upper Battery would have consisted of the 11 and 12 inch 25 ton guns protected by huge earthen bulwarks. Both the upper and lower underground magazines and tunnel complexes would have been built and there would have been searchlights on the Island together with their associated engines or generators. The biggest difference would have been the landing stage for the Island. The current pier wasn’t built until 1939 and a slipway together with stone landing stage was there instead. There was only one flagpole which is still in place today (though not the original) and the 3 Gun Batteries of 3 Gun Emplacements each for the Breech Loading Guns were not yet built although they would be started the year after Alice’s birth. The Gunners manning the Island at the time were from 3rd Brigade of Western Division Royal Artillery. They reformed as the Royal Garrison Artillery 2 years after Alice’s birth. Samuel, Alice’s father would most likely have been part of the small regular cadre for what was predominantly a reserve unit.

We know a little of her parents, Alice was a Plymothian born around 1879. Samuel was Lancastrian from Manchester and was born around 1866. They married in East Stonehouse in July 1896 when Alice was 17 and Samuel was 30 years old a little over a year before baby Alice arrived. They most likely had a room or two in what is now the known as the Governors House but it may have been a room or two in the Barracks. There would have been no running water. The Army still had a beer and rum ration as water was still no fit to drink. There was no electricity, light was from oil lamps and heat from coal or kindling wood. The day before Alice’s birth a depression passed over the UK bringing with it some bad weather which may have meant the family couldn’t get to the mainland for the birth. The weather on Monday 11th October was described at the time as moderate to fresh SW winds with passing showers. I can’t find out exactly how long the family stayed on the Island but as a Gunner her father, and therefore the family, would have been posted every few years. Even if they stayed as part of 3rd Brigade he could have been moved anywhere within the entire Plymouth Garrison that the Brigade covered but by 1899 the family was posted to Castle Cornet in Guernsey as this was where in October her sister Lillian was born. However in 1902 the family was back in Plymouth where another sister Gladys was born. It wasn’t long before the family was on the move again this time to Kent as part of Sheerness Garrison where in 1904 another sister Beatrice (Trixie) was born. They were still in Sheerness when her first brother Samuel was born in 1907. Around this time Alice started entertaining friends and neighbours, her first performance was Cinderella and her costume was actually her mother’s wedding dress cut up to make the ball gown without her mother’s knowledge.

By 1912 the family was again in Plymouth when a second brother Reginald was born followed by the final sibling in 1915 a third brother Ronald. A little over a year later in October 1916 Mother Alice died aged 37. It isn’t clear if Samuel, the Father, was still serving. He would have been 50 years old by now. However World War I was now on and Alice joined the thousands of women helping the war effort and enlisted in the Woman’s Royal Navy Service (WRENs). The WRENs were formed in 1917 and when Alice would have been 19 or 20 years old. During her service Alice produced shows on the SS Paris, a small passenger ship requisitioned by the Navy as a minelayer and on HMS Hood and Royal Oak. When the War was over Alice returned to the family home in Plymouth on Lambhay Hill. Around 1918 Alice adopted the stage name Geraldine and founded her School of Dance in the front room of the family home. Her first student was 9 year old Arminel Myers who paid 6d for her first dance lesson. Incidentally Arminel must have met Geraldine’s 12 year old brother Samuel at this time. I’m not sure if it was love at first sight but they eventually married in 1937. Unfortunately her Father died not long after in October 1919 leaving Alice to look after her 6 siblings, the youngest of whom, Ronald, was only 4 years old.

HMS Hood. the SS Paris and HMS Royal Oak, all ships where Geraldine performed in shows.

Life must have been quite tough for Geraldine in the early years attempting to build and run a business in what was still very much a Man’s World. The school put on shows after the war finished to raise money for charities and entertain returning servicemen. However even with all this going on Geraldine still found time for a social life and was going out with a young man by the name of Edwin Albert Richard Tout. Edwin was employed on a White Star Line Cruise ship so it may have been something of a long distance relationship but they eventually married in Plymouth on Friday May 28th 1926 although they immediately travelled to Southampton where Edwin rejoined his ship after the briefest of Honeymoons. According to a report of the wedding Geraldine wore a gown of white crepe-de-chine embroidered with silver beads and a bridal veil of tulle worked with true lovers’ knots and was attended by 4 bridesmaids including two of her sisters, Lilian and Gladys.

By the mid-1930s Geraldine had moved to 28 Cobourg Street. The garage was converted to a dance studio. Various shows, concerts and displays were put on in the back garden and the School also participated in local Carnivals and Pageants. As the school grew the Alhambra Theatre at Devonport would be hired on Saturday afternoons and shows with as many as 100 students were put on in aid of local charities. Margaret Roberts recorded her memories as part of a BBC project and recalled visiting Victoria Park “I was taken to a seat at the bandstand to watch Geraldine Lamb’s dancers on a Saturday afternoon – the chorus girls did a high-kicking act dressed in short red military outfits with pillbox hats.”

By the start of World War II Geraldine’s sister also known as Trixie had returned to teach at the School after leaving home to perform in Revues from Brighton to Blackpool. Geraldine also had two children by this time, Teddy and Valerie and had adopted a third, Sylvia who in actuality was Trixie’s daughter born out of wedlock which would have been a scandal at the time. During the Second World War the school students, known as the Starlights, performed in around 380 ENSA (Entertainments National Service Association) shows in Plymouth. Unfortunately during the war the family were bombed out of Cobourg Street with an unexploded bomb in the middle of the dance studio. Dance classes continued on Plymouth Hoe, or on a local beach just outside the city. On another occasion her three children had performed a skit for servicemen at a local theatre, the Alhambra. Teddy stood in the middle of the stage dressed as John Bull with two real bulldogs, and Sylvia and Valerie stood each side and danced. An air raid started and they decided to leave the theatre rather than shelter there. As they left they looked back to see it being devastated by bombs with total loss of life. Whatever life and the War threw at Geraldine she just continued onwards and upwards. The family and school now moved to a large house at 12 Connaught Avenue, Mutley.

The school’s first pantomime was produced in 1946 and is still going strong. This grew to such an extent that it was performed in surrounding towns and villages from December to the end of March, every Wednesday, Friday and Saturday with the matinee and evening performance sometimes 30 miles apart. Students would take their professional exams and the older students were used by professional shows as their dance team during their runs in Plymouth. The summer was equally busy with performances at shows fetes and garden parties.

Famous past pupils include Fern Britton, Angela Rippon, Judi Spiers, Geoffrey Cauley and Wayne Sleep. Recently Wayne recalled his time at the school “I wanted to be Gene Kelly and Fred Astaire. I didn’t want to be a ballet dancer: a boy, being a dancer, in 1952? I don’t think so! But the only thing you could go to in those days was dance. I waited two months for tap shoes from London and when they did arrive they were girl’s!” Wayne famously went on to get a scholarship at The Royal Ballet. Angela Rippon used her dance skills in one of the most famous Morecombe and Wise skits on TV.

Alice Maud “Geraldine” Lamb passed away on January 27th 1967 having lived a quite remarkable life that not only played a huge part in Plymouth but also impacted on the national stage quite literally. Even more remarkable was she never had a dancing lesson and relied entirely on her own imagination. She did ensure both her daughters were trained to dance and teach sending them to London to gain their qualifications. Her daughter Sylvia took over the running of the school whilst her other daughter Valerie ran a Dance School right next door. Valerie’s daughter, Sue Cook, runs the School today which is now based in both Plymouth and Saltash and continues to go from strength to strength.