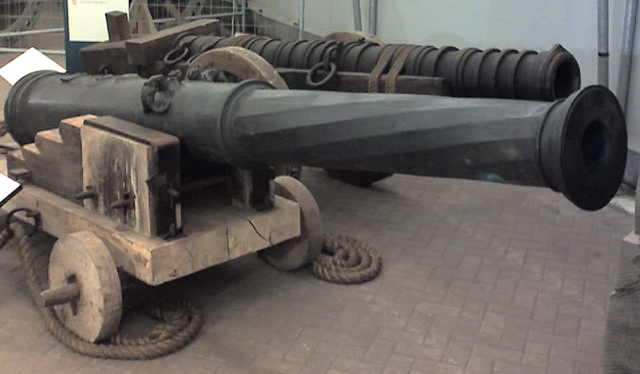 By the reign of Edward VI artillery developments and improved gunpowder meant the deep water channel between the Island and Hoe together with the shallow water channel on the Cornish side would be in the range of cannon on the Island. This made it a key point in defending Plymouth as well as the anchorage around the Island itself and provided the reason to develop fortifications there. However the Island was susceptible to an attack as a prelude to attacking Plymouth so had to be able to defend itself against an enemy assault.

The first fortifications on the Island were built on the orders of Edward VI either just before or after the Prayer Book rebellion of 1549. A 1548 letter from Edward’s Privy Council to the Mayor of Plymouth asked why the Corporation had not yet “proceede in the fortefyinge of St Michaelles Chappele to be made a bulwarke”. The work was apparently complete by 1549 by “plucking downe of that chappelle harde to the foundacion….beinge made upp againe with a wall of turfe”. These initial defensive works were paid for by the Crown and records show the cost as £123 6s 8d. There is also the possibility that a second Tudor Tower on the North East of the Island (facing the Hoe) was built around the same time. The remains of a tower dated to Tudor times can still be seen below the casemates today facing the Hoe and in line with a battery on a 1598 map of the Island. It is therefore quite possible this is the remains of that Lower Fort. The 1598 map also shows about 16 firing points around the Island and it’s likely that these timbered gun platforms were constructed on the Island when the chapel was rebuilt as an artillery tower. The gun positions would have been sited not only to attack enemy ships but also defend the Island itself against an attack. The batteries would also have furnaces to heat the iron shot used against enemy ships. A basic furnace would have been a metal grate or could have been a small brick type oven.

The cannons of the time were muzzle loaded so gunpowder would have been put down the barrel first followed by a wad of paper then the shot rammed home often followed by another wad of paper to prevent the shot rolling out. The barrel would also be sponged out between firings to cool down the barrel and prevent the powder igniting prematurely. A primer of superior gunpowder would have been used to initiate the main charge and would have been lit via a vent in the top rear of the barrel. Manned by 4 or 5 man gun teams a typical shot weighed 18lbs needing 12 lbs of powder providing an effective range of 550 to 600 metres. The time needed to reload would vary with the experience of the gun team but would be anywhere from 3 to 4 minutes. The cannon themselves would be forged from either iron or if they were ships cannon from bronze, sometimes known as brass. The bronze cannon were lighter and would last around 100 firings before failing whereas the iron cannon could be re-bored once it began to fail. Financial constraints often meant the Island had a limited amount of cannon that would augmented by any available cannon, often from ships, when a threat arose.

Similarly the Island wasn’t always garrisoned. When a threat arose the Crown would supply a few Gunners from the Office of Ordnance, a centralised royal department or the Corporation would supply watchmen for the Island. If the threat became more serious or materialised the Corporation would call out the militia that would crew the guns under the supervision of the Gunners and also defend the Island from attack. Thus responsibilities for the Island were divided between the Crown and Corporation of Plymouth. The Crown paid for the defences and repairs or allowed the Corporation to use part of the customs gathered from merchants using the port to pay for any work that was required. The Crown would also pay for Gunners retained by the Office of Ordnance to garrison the fort whilst the Corporation would administer the Militia. Privy Council, Parliamentary and Corporation records provide some detail. In 1551 Edward VI paid £79 1s 8d to provide the Island with 4 gunners for 2 years. By the time Elizabeth I was crowned in 1558 Spain and France were in dispute on the continent and neither were minded to move militarily against England. Elizabeth rarely garrisoned the Island in the early part of her reign but in 1560 two men were paid 4s for guarding the Island. Records also show £2 paid to John Hawkins in 1566 to move ordnance between the fort on the Hoe and the Island showing that the Island didn’t have a full complement of guns all the time. In 1568 1s 4d was paid for a key to the “door of the Island” indicating the Island may not have been manned at all at times. There is no indication of where the door was although a door suggests it was providing access via a building which could have been at its present position or possibly part of the second Tudor Tower or Lower Fort mentioned in the 1602 report which was later modified.

This was a period of relative quiet up to the start of the 1580’s apart from a few Catholic rebellions against Elizabeth. In 1577 the Island saw Francis Drake depart Plymouth on his circumnavigation of the World. Returning again in 1580 he arrived at night and anchored out of sight of Plymouth behind the Island unsure if Elizabeth I, his benefactor, was still Queen of England. Hailing the first fishing boat out of the port the following morning he found out she was indeed still Queen and proceeded to London where he was knighted at Deptford. A year later in 1581 Drake became Mayor of Plymouth for 12 months as well as becoming an MP in Cornwall. However his political duties came second to that of his duties to Elizabeth and he was often away on “certain business necessary in the service of Her Majesty”. By 1583 the state of affairs whereby the Island was garrisoned intermittently ended when England began to support the Protestant rebels in the Spanish Netherlands, now Belgium and the Netherlands, against Spain. At this stage the Corporation tried to gain control of the Island by petitioning the Queen to make Drake the Governor or Captain of St Nicholas Island. However Elizabeth refused the petition as her primary concern was the defence of England whereas the Corporation had the survival and expansion of Plymouth and its emerging merchant class as its priority no matter who was on the Throne. Whilst Drake himself did plenty to support Plymouth he is unlikely to have wanted the Governorship and be seen to support the Corporation against Elizabeth who provided him with his fame and wealth. Also coming from a poor family it would have curtailed his expeditions against the Spanish which were his source of income.

Next week the developments on the Island for dealing with the threat of the Spanish Armada and the aftermath of its defeat through to the appointment of the first Governor of the Island.