THE FIRST OWNERS AND DID THE ISLAND COME WITH RABBITS OR FISH? 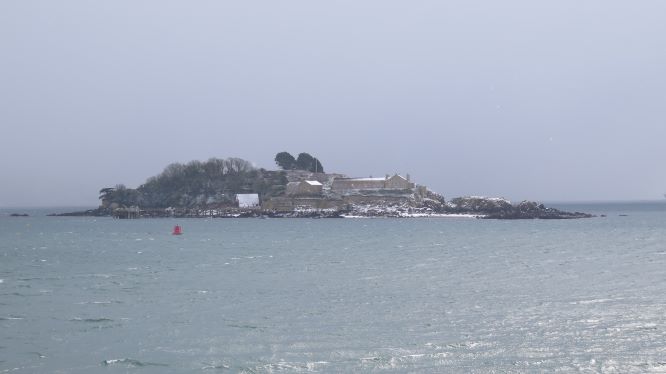 The ownership of lands in the aftermath of the Norman Conquest in 1066 is difficult to pin down. We do have some definitive dates from Royal Charters and the other main reference is John Leland’s Itinerary of England and Wales written between 1535 and 1543. These were his observations of the history of various places he visited, including Plymouth, drawn from written and oral sources. These may have been distorted over the years and are therefore open to interpretation. However they are the earliest reference we have albeit written some 400 years later. Leland is also referenced frequently by later historians and probably as reliable a source as we have although not necessarily 100% accurate.

So what we do know? From the Domesday Book Reginald Valletort was granted tenancy to 57 manors including their rights although which manor included Drake’s Island isn’t clear. Reginald died soon after the Domesday Book was written in 1086 and his son another Reginald, known as Reginald II, inherited his estates. On his coronation in 1100 Henry I issued a Royal Charter which confirmed Reginald II in holding these estates.

In 1121 an Augustine Monastery founded at Plympton. It was not unusual for Monasteries and churches to receive lands or rights to various from nobles on their founding and often in return for prayers or alms in perpetuity for the family. Grants may also be given to atone for a sin committed by someone in the family. It was also becoming unacceptable for nobles to keep churches as their private property and increasingly churches with some surrounding lands were granted to local ecclesiastic authorities. For whatever reason Reginald II is recorded as granting all his fishing rights in the Tamar to the Priors with a few exceptions. It isn’t clear if any fishing rights were associated with the Island and if so whether they and possibly the Island were included in Reginald’s grant. The grant probably happened just after the founding of the Monastery as Reginald II died in 1123. Later on another Valletort is quoted as granting the Island itself. Leland is the original source for the donor as being Walter de Valletort who is described as a man of “many possessions”. No date is given and the Island is also reported as being granted either “cum cuniculus” indicating with rabbits or “cum caniculus” indicating with fish or fishing rights. So there are a couple of mysteries here to try and resolve.

So who was Walter? There appears to be no record of when he was born, who his parents or siblings were or whether he had any children. There is also no Walter in the family tree of those Valletort’s who held estates in Devon and Cornwall. He is only mentioned as granting the Island to the Priory by Leland, who doesn’t give a date. Sometimes nobles were known by two names to differentiate them from others of the same name in the family and the Valletort’s had more than their fair share of Reginalds, Rogers and Ralphs so it is possible Walter was a name for a Valletort with a shared name. Another possibility is through Jeanne de Valletort, a relative who became the mistress of Richard, Earl of Cornwall. They had a son, Walter in 1245. However he was usually known as Walter Cornwall and there is no record of him having any estates that could include the Island. Additionally later experts in tracing the Valletort family can’t identify any Walter Valletort. Finally it may be Leland is reporting an oral history that was distorted over time and the name is wrong.

So if he lived did our mysterious Walter grant the Island with rabbits or fish? Either could be true, rabbits (cuniculus) were introduced into Britain by the Romans sometime around AD43. They were reared for food and their pelts by the middle ages but ordinary households could and did keep them for their own use rather than to breed and sell. However none of the records of the Priors of Plympton show them keeping rabbits on the Island and it seems a little odd that rabbits would be kept on the Island when the population is on the mainland. It would be easier to keep the rabbits enclosed in a warren and maintain it on the mainland anyway. The fish interpretation seems more likely if the Island had some fishing rights attached to it as Reginald had already granted the Priory most of his fishing rights around 1121. Caniculus part of the Latin for a catshark that was in the Sound and was caught for food at the time. Finally as before the source is Leland and seems to be a possibly distorted reported oral history so it could be the Island came with neither. It is impossible to determine given we can’t identify Walter or if the Island had any rabbits or fish!!

As for the date, the Island definitely passed to the Priors of Plympton by 1280 as the last direct descendant of Reginald II Valletort, Roger Valletort had sold off the remaining family estates to pay off the family debts by that date. Leland also mentions an uncorroborated account that the debt was incurred because a Valletort had committed a murder. Some local historians place the date as 1135 but this seems to come from a 1953 book written by Hurrell with no records to support the date and Leland, our earliest source doesn’t give a date. So far we can’t conclusively prove Walter existed and if he did if or when he granted the Island to the Priors or whether it came with rabbits or fish or neither!!

When and by who the Island was granted to the Priors isn’t of critical importance, neither is if the Island came with rabbits or some fishing rights although it would be nice to fill in the gaps. Personally I think the Island was probably granted by Reginald II as part of the fishing rights shortly before his death in 1123. The alternative account by Leland seems based on an uncorroborated oral history passed down over 400 years and there is no record of a Walter Valletort ever having lived. However we do know that the Island passed into ownership of the Priors as it is confirmed in later Royal Charters. What is definite is if the Island had been granted by a Valletort to the Priors of Plympton it was done by 1280 and whenever the Island came into their possession it would remain in their hands until 1539 when Henry VIII dissolved the Monasteries. Incidentally the southern part of Plymouth was known as Sutton Valletort which together with Sutton Prior, owned by the Priors of Plympton, and Sutton Raf eventually became Plymouth after the Valletort family granted Sutton Valletort to the Priors and they also acquired Sutton Raf. The Valletort name can still been seen in Plymouth, there is a Valletort Road, Valletort Place and Valletort House in the City. There also used to be a Valletort Inn in Claremont Street that closed around 2000. Next week the ownership of the Priors of Plympton which also coincided with the incorporation of Plymouth and trying to solve when the Island became known as St Nicholas Island and if the Chapel was rededicated by the Priors.