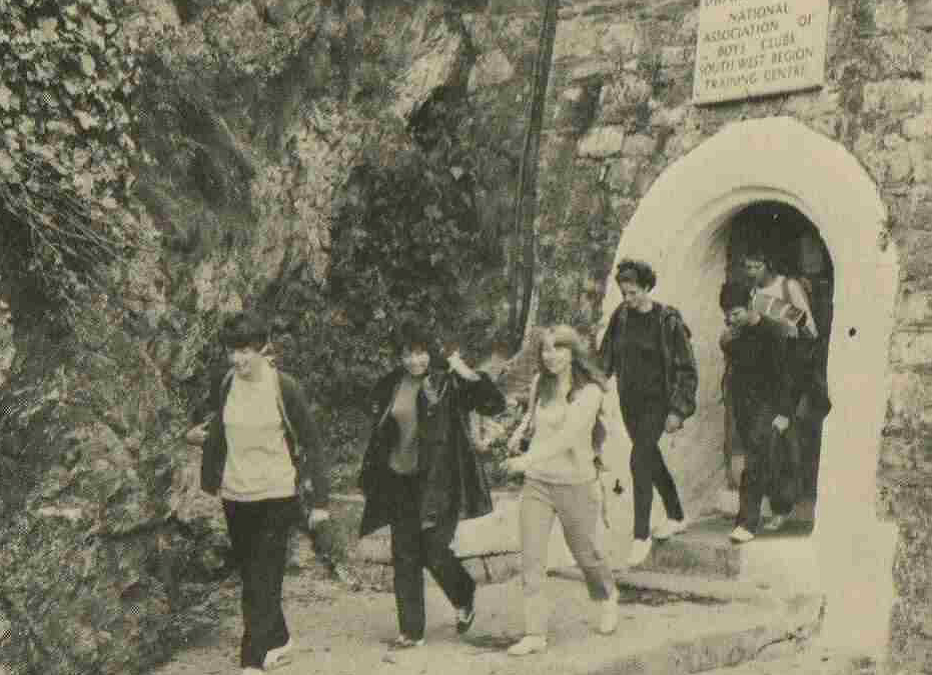 I had a great response to the request for memories during the Adventure Centre years so I’d just like to set the scene and put into context how the Island was run and the groups involved to hopefully add a bit to the understanding of the memories that will be shared over the coming weeks.

By the late 1950’s it became clear the Military would be leaving the Island and that the Council did not feel they had the financial and other resources to make the Island profitable even if they could obtain a lease or buy it. Around 1958 or just later the Old Plymouth Society, chiefly through Stan Goodman got permission to work on the Island to preserve the historic buildings and try to deter any vandalism. Stan Goodman was the driving force and he had the idea of creating an Adventure Centre on the Island. This really started to take shape as funds started to be raised and grants were applied for, then in 1963 the National Trust obtained a lease which was conditional on the Island maintain an Adventure Centre. And so the Adventure Centre started life.

At the top we have the leaseholders who were responsible for ensuring the Island activities met the conditions of the lease. There were various leaseholders over the years, the National Trust was followed by the Mayflower Trust and finally the Council. They were generally hands off and left the running of the Island to the Drake’s Island Committee under the chairmanship of Stan Goodman. The Committee viewed themselves as independent of the Leaseholders and not responsible to them for the how and why of the way they ran the Island. They saw the leaseholders as an organisation that would support the Committee financially without question. The Committee took the view that by opening up the Island and running the Centre it was beyond a financial price and that any shortfall should be made up. This did lead to conflict as the leaseholders viewed the Committee as only holding their authority as granted by them and the Committee needed to follow direction from the Leaseholders especially when it came to balancing the books.

The Drake’s Island Committee in turn hired the Warden. The Warden, a full time employee, was responsible for everything that happened on the Island, ensuring it was supplied, running and disciplining the staff, the training schedule, reporting and planning each season. He in turn had a Chief Instructor, a Senior Instructor for each activity (usually 4) and a number of instructors to not only run the activities but also the Centre itself, look after the students not only during the adventure activities but also supervise the evening leisure activities, maintain the equipment and stores, help with supplies and develop the Centre’s infrastructure. This ran from creating climbing and abseiling walls, removing rubble left by the military, to assisting in constructing the quay on the foreshore. The Chief Instructor and Senior Instructors were full time and stayed on the Island full time maintaining the Island and equipment. The Instructors were mostly seasonal with the odd exception if there was a gap that required to be filled. The Instructors also filled in the duty staff on a daily basis during the season, so there would be a duty instructor, duty boatman for example, both on a 24 hour duty. There was a bosun who ran the Island’s three boats including the supply boat which did regular stores and ferry trips for the students and staff, to and from Mill Bay which was a run down area and part of the red light district back in the day and not yet developed. In addition there were seasonal kitchen staff, usually 2 Chefs and a couple of Porters. The exact number of staff would vary, in the early years with less capacity they were fewer but as the Centre developed more were required. Total staff over the years seems to have between 10 and 30. It was often a fluid situation with staff sometimes leaving at very short notice because of disagreements or just better job offers, the pay was not good especially for the seasonal staff.

The Royal Engineers carried out demolitions training (see the above photos) just before they left the Island. The rubble largely ended up in the casemate area. One of the first jobs that needed to be done was to remove that rubble. The Army came back and lent a hand and the rubble ended up in gabions as the base for the present quay on which the boathouse is built.

The first groups to use the Island were the Casemateers. These were groups that rented out the Casemates and the first Casemates were rented out in 1963. They could use their Casemate as a Store or kit it out with bunks so it could be used for overnight stays. Although they could use the Centre’s equipment and Instructors it was only if they were spare. Generally they had their own equipment and were pretty much left to their own devices.

The Centre Season generally ran from March or April to September. There were two types of students. The day or non-residential students who came on a daily basis from Monday to Friday leaving at 5pm every day. They were generally young and most often booked on as a group by their school or other organisation. As such they would usually be accompanied by a couple of their own staff to administer the group during the day and assist the Instructors. The residential students stayed on the Island arriving on Sunday evening and leaving the following Saturday morning. They could be individuals booked on by their parents or groups booked on, usually by schools, but needed to be at least 11 years old. The groups would be accompanied by their own staff as chaperones and to help with the daily administration of the group. The number of students varied both at the time of year and for the residential students on the development of the accommodation. The first residential students arrived in 1966 with capacity for 25 students which had expanded to 65 by 1971 and again expanded in the 1980’s. Although given the lack of regulations at the time I’m sure the Centre would have squeezed in as many as physically possible. There was no Health and Safety or risk assessments guiding the training, it was all done according to what was understood as being safe at the time with that dependant on the Senior Instructors knowledge. That doesn’t mean it was inherently unsafe just there wasn’t any overarching regulations that had to be adhered to and ensured it was safe.

Facilities wise there was a water pipe laid from Devils Point in 1964 that filled holding tanks which in turn fed the water system. Power was initially via generators until a Power Cable was laid from Devils Point in 1969. Sewage was treated in holding tanks using bacteria with an outflow directly into the Sound. The actual pipes and local infrastructure was not built to any great design and repairs were at a practical level rather than guided by the very few Building regulations in force until the late 1970’s when things became far more regulated. It was not unusual for things to fail with maintenance and repairs a bit of a never ending issue.

The Drake’s Island Committee also formed a number of ad hoc committees to run various aspects of the Island as required. These were usually to run specific aspects of the Island such as the Kitchens or for fund raising. One Committee oversaw the tourist access to the Island, the running of the Café and Post Office, another developing a Panorama in the Underground Magazines for example and yet another organising events such as Dinners on the Island.

In all that happened on the Island things were dependent on the personalities involved. A good Warden for example, could ensure things ran smoothly and the Island was kept supplied, fully manned and the equipment in good order on the other hand a poor one could see things run down fairly quickly and the same goes for the Committee members and other staff. As I have said previously, given the state of the Island when the Committee started work and all the challenges involved in just getting the Centre open and then running it amidst new Building and Health and Safety regulations coming in together with a period of social change I think it is amazing it got off the ground at all let alone ran for 25 years. That it did and left such a lasting impression on Plymouth is testament to all those who were involved in getting the Island up and running, managing, fund raising and instructing over the years. Over the next few weeks I’ll be sharing some of the memories of those 25 years with contributions from the various individuals involved, Instructors and Staff, Residential and Non Residential students and the Casemateers. I hope you’ll enjoy them.