The Addition of the Centre and Eastern Artillery Batteries in 1901 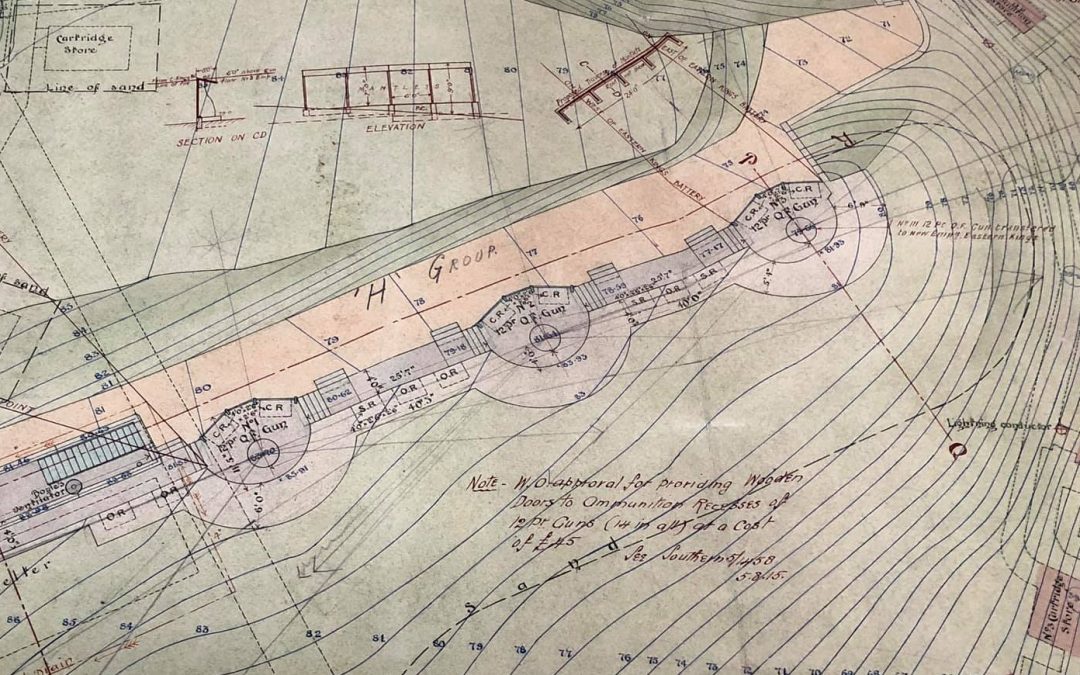 The upgrading of the coastal defences continued with the building of the Centre Battery of three gun emplacements to take a 6 inch Breech Loading Gun each alongside the Eastern 12 Pounder Quick Fire Battery again of 3 gun emplacements. These works were completed in 1901 around 3 years after the Western Battery was complete. These may have been part of the original general plan to upgrade our coastal defences although at the time the recently announced Tirpitz Plan to expand the German Navy by its Navy Secretary Alfred von Tirpitz had alerted the UK to a potential new threat. However at this early stage the German plans were exactly that, just plans. It’s debateable how much the Tirpitz Plan pushed the upgrading of the defences as the plan was concerned with the expansion of the German Fleet to contain the Royal Navy. Nevertheless there was a real threat from Torpedo boats in any future war and the upgrade to accommodate the new breech loading guns to meet a different, faster threat was needed.

To facilitate The new Centre Battery and Eastern Battery the existing Upper or Main Battery of 25 ton Guns was mostly demolished. This Battery had five 25 ton Guns and were protected by Earth Bulwarks that also contained the Shell and Cartridge Stores. The old Battery covered from Sutton Harbour through the Breakwater to Mount Edgecombe. The new Batteries would now just cover from the Breakwater so were aligned as slight dog leg rather than arc. This meant one of the Main Battery gun positions would become obsolete and other four would be demolished and built over. Three of the forward Shell and Cartridge Stores would be retained and incorporated into the new Central Battery as store rooms.

The old 25 ton Guns themselves were not removed but were buried at the top of the Island. Given the nature of the ground they were probably semi buried then the earth from the old bulwarks was used to cover them over and the whole area levelled. The one gun position that did not interfere with the new build had its protective earth bulwarks removed but the surface rails and granite blocks were left. Military maps indicate the guns were buried just behind the three guns on the ground and before the mounted Gun in the background in the picture above.

At the Centre Battery the Eastern and Centre Gun positions were built over the old Upper Battery whilst the Western Gun Position would require the removal of the QF Magazine serving the Western Battery. A Shelter would be also be built into the Battery.

In both the above drawings the Western gun emplacement of the Centre Battery is larger as it needed to incorporate a shelter together with a cartridge and shell store directly below the Gun position. The steps in the picture below lead to the upper level of underground tunnel and forward magazine that had hoists added to supply the centre and eastern gun emplacements at the top of the Island and were built directly over the tunnel. These couldn’t serve the western emplacement as they were too far away hence the need for a separate stores and a shelter.

The Eastern and Central emplacements of the Centre Battery made use of the added hoists and used the existing upper magazines as their cartridge and shell stores. A shelter was built between the two and three of the existing stores were also incorporated into the Battery. These were used from left to right in the technical drawing below as a spares store, lamp store and paint store,

The Eastern Battery extended beyond the old Upper Battery to cover the Eastern Approach from the Breakwater. It also incorporated a shelter. The shelter was sunken and accessed by a set of vertical iron steps.

At the end of the construction some but not all the guns were added. In 1902 it was reported that the Lower Battery which appears to be the Western Battery behind the Barrack Block had its three 12 Pounder QF Guns. The Centre Battery had only two of its three 6 inch BL Guns delivered. There were still nine 9 inch 12 ton guns in the casemates facing South East so the nearest to the breakwater indicating that new Eastern Battery didn’t yet have its guns. Three 12 Pounder QF Guns were also reported in the Casemates facing Mount Batten. We do know that the Iron Blast shields at the end of the Casemates were changed and there are signs in the casemates indicating they did have QF Guns in then although they appear to be designated either 6 or 8 Pounder QF Guns rather than 12 Pounders.

From the 1901 Census the manning remained minimal apart from training and exercises. Only 9 personnel were recorded on the Island, the Commander a Royal Garrison Artillery Corporal (the Artillery didn’t replace the rank of Corporal with Bombardier until 1920), a Bombardier (at this time Bombardier was the equivalent of Lance or Second Corporal rather than full Corporal), four Gunners, and two civilians, one of whom was accompanied by his wife. They would not only have the guns to maintain but there were searchlights on the Island and the Barracks and stores to maintain. The yearly training cycle would be maintained with various Territorial Units deploying for blank and live firing of the guns. At least one of these would culminate in the annual large scale attack on the Plymouth defences over a couple of nights. The Sappers would also deploy to operate the Searchlights.