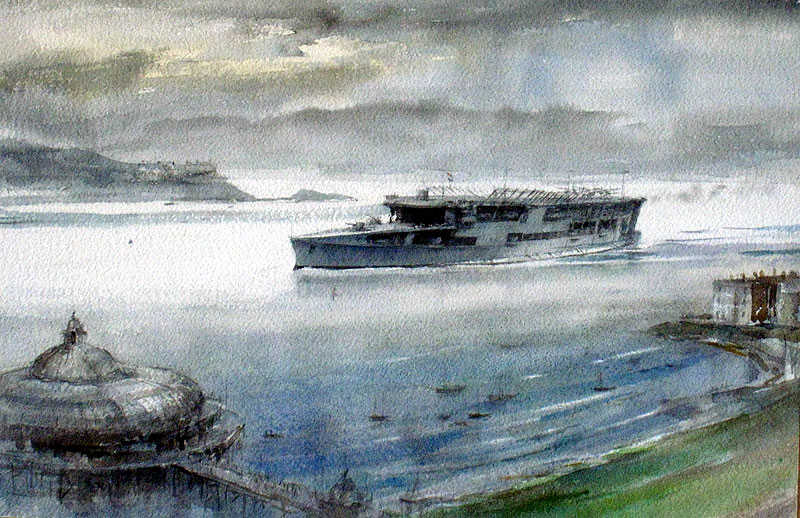 At the beginning of the 1930’s people still couldn’t imagine another War happening. Drake’s Island sole occupant was a caretaker, Paddy Flood and locally ideas were discussed about Drake’s Island being leased to Plymouth Council. The popular scheme was for a public pleasure resort and questions were asked in the House of Commons regarding the current use of the Island and to consider leasing them to the Council. However the War Office quickly refused with Mr T Shaw, Minister for War, reasoning that the Island was key to the defence of Plymouth and was still used for exercises and training. The guns were still maintained and Artillery practice carried out by visits from detachments from Penlee Fort. Annual major exercises of all Plymouth defences against the Navy acting as enemy were carried out, usually during annual Territorial Army Camps. The exercises included the Royal Engineer Searchlight detachments. By 1932 a small garrison of 1 Capt, 2 Master Gunners, 1 Sgt, 1 Bombadier, 3 tradesmen, 4 gunners and 5 gunners are listed on the Island. There was no major threat at that time so the reason for increasing the garrison are unclear. One possibility is that the defences and equipment had started to need more regular attention and some repairs were required.

The local Sea Scouts made use of the Island in 1933 for a competition part of which involved rescuing casualties from Drake’s Island, giving 1st Aid and transferring them to the mainland. Another visit for training in signalling was made in 1937. Other visitors included the King Street Baptist Church who were allowed a pilgrimage to the Island to remember the sacrifice of the non conformist Baptist preachers who were imprisoned on the Island after the restoration of the Monarchy in 1660. Of the eight imprisoned one, Abraham Cheare died on the Island but the other 7 ministers who were also imprisoned on the Island but released after their congregation paid a bond on condition they didn’t come within 20 miles of Plymouth. It was the only time the Island was used as a prison. In 1937 there is mention that the underground prison sealed up and was 30ft below floor of the main magazine. There is the possibility that what is stated as an underground prison is something entirely different and part of the underground magazine and tunnel network built for the 1871 Palmerston Battery. A number of the forward magazines do resemble small cells but were definitely forward magazines built between 1861 and 1871 by Hubbard’s, a Stonehouse construction firm to a design by the Royal Engineers. In all probability the prisoners from the restoration of Charles II were kept in the basements of the Tudor buildings that were still on the top of the Island at that point. The Prison was only used for a couple of decades until about 1685 and there were no other buildings or tunnels on the Island at that point on the Island. The other possibility is that it was the Island military prison cell used to hold defaulters for short periods until they could be transferred to the Citadel. There is no mention of why it was sealed up but by 1937 the threat from Nazi Germany was becoming clear and there may have been some ongoing repairs and minor upgrades to the defences of the Island that meant the work needed to be done.

Mr Harrison replaced Paddy Flood as the Caretaker and his family lived on the Island with him. The following is a letter his daughter Florence wrote to the local paper “I was interested in the letter about Drake’s Island off Plymouth because I lived there for a year in 1936, my father being the caretaker for the War Department. It was a wonderful place in summer with a glorious view, but it was not so pleasant in winter. Rough weather would prevent boats from landing and when they did reach us we had to jump for them. At such times spray would smash against our bedroom windows.” Early in 1939 an article appeared in the Daily Mirror about the Council refuse men collecting the garbage from the Island by boat. The Council had to provide the service as the Island paid rates to the Council.

Next week the lead up to World War II