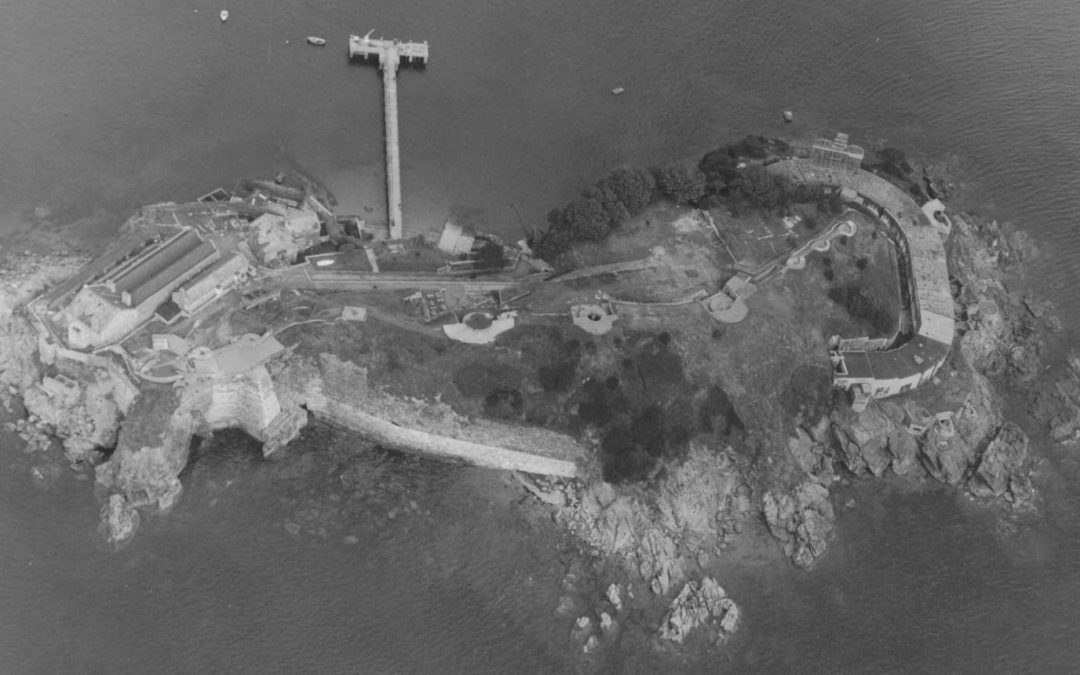 The last decade of the 19th Century began with Gunner Dawson of the Island Garrison saving the life of Gunner Kelly. Both had been on the Royal Artillery Cutter returning from Millbay to the Island when Gunner Kelly fell overboard prompting Gunner Dawson to immediately plunge into the water and keep Gunner Kelly afloat until they could be rescued by the remaining crew on Cutter. However the Gunners failings as seafarers continued with Gunner Harris the following year. Having been sent on Monday to get candles and other stores from the Ordnance store in Plymouth he was returning to the Island at 8pm. However he managed to miss the Island and the Breakwater and was carried 27 miles down the Devon coast before he could the boat onto land at Lannacombe Bay on Wednesday morning before walking to Salcombe on Thursday and eventually arriving back on the Island the same day after hitching a lift in a boat. Gunner Herbert Ford was court martialled in 1895 for disobeying a lawful command and using threatening language to Bombardier Dolan. Apparently Bdr Dolan had ordered Gunner Ford to leave the canteen. Gunner Ford refused as he wished to finish his beer and then threatened Bdr Bolan by saying “Yon are all by yourself, so I will punch your nose”. Despite pleading not guilty and having his own brother appear for him Gunner Ford was found guilty. The same year the landlord of The Golden Lion Pub in Bath Street was had up for running a disorderly house and Gunner Frederick Archer stationed on the Island who was a regular was called as a witness stating that the Public House was properly conducted. Alas it was to no avail and the landlord was fined £10 although didn’t have his licence endorsed. Unfortunately Gunner Neapan fell to his death also in 1895 from the ramparts after apparently lying down to sleep he rolled over and crashed onto the foreshore. 1896 didn’t start much better for the Artillery as the Island boat carrying a number of Gunners capsized due to the men skylarking, all were rescued except Gunner Travis who sadly drowned. There was also the strange case of Gunner McCormick trying to sell his wife in 1898. Gunner Patrick McCormick was stationed on the Island and married in 1892 when he was posted to South Africa. In the meantime his wife Sarah had got remarried to a Mr James Weekes in 1897, 5 years after Gunner McCormick had left. Gunner McCormick claimed he had written over 200 letters to his wife and left her 10s a week to live on, Sarah on the other hand claimed he had only written 4 letters and she hadn’t heard from him since 1894, he had sent no more than £4 and she assumed he had died. Sarah also claimed Gunner McCormick demanded £30 from her and her new husband, that she was threatened and assaulted. Where there was agreement was that Gunner McCormick settled for 2s a week until the £30 was paid and a bank book was produced showing that an account had been opened and Mr Weekes was indeed paying in 2s a week. I don’t know the outcome of the case but it was Sarah on trial for bigamy not Gunner McCormick for trying to sell his wife or extort money he was merely called as a witness. How times have changed.

The usual round of inspections continued and with the reorganisation of the Army supply system so there was now a central military logistic chain the prices and quality of goods offered by the civilian canteen on the Island were reviewed by a board of Officers, The last civilian tender for supplies for the Island appeared in 1893 after which all supplies were bought centrally by the Army and sent to the Island through its own logistic chain. Socially the Garrison had its own cricket team which played at the Citadel as the Island had no suitable area large enough. By 1897 Queen Victoria was celebrating her 60th year on the throne and the Island was the focal point for coordinating the military parade for her Diamond Jubilee in Plymouth. The Royal Standard was flown on the Island and a signalling staff erected which could be seen at the different stations around the Sound including HMS Cambridge, Cremyll Fort, Fort Picklecombe, Western and Eastern Kings Batteries, The Citadel, Stamford Battery, Fort Bovisand, Fishers Nose, Mount Batten, Mount Stadden, Mount Edgecumbe and Stonehouse. The first part of the salute was for the guns to fire sequentially from the left to the right however all the stations had to give the Royal Salute and Three Cheers at the same time which was indicated by dropping a ball from the signalling staff on the Island for the Royal Salute and a second ball for the troops to give three cheers.

The decade also saw the introduction of breech loading guns as the problem of the breech seal had been resolved. By 1892 the Military had introduced 6 inch QF (Quick Fire) guns and in 1894 introduced the 12 Pounder QF gun. The previous guns would take around 5 minutes to reload whereas the 6 inch gun using a brass cartridge and separate shell could be loaded far quicker and gave a rate of fire of 5 to 7 rounds per minute with the 12 pounder using a combined cartridge and shell fired at 15 rounds per minute. Both guns used far less manpower to operate the guns. To accommodate the guns 3 new concrete Gun Batteries of 3 Gun emplacements each were built down the spine of the Island. The Western Battery was built in 1898 with the Central and Eastern Batteries completed in 1901. The Central and Eastern Batteries were built over the old 11 and 12 inch Upper Battery. The Upper underground magazines had hoists added to feed into the forward magazines of the new Batteries. The Western Battery had its own magazine incorporated beneath the gun emplacements. At least two maxim gun (machine guns) posts were also added for local protection. Searchlights had been on the Island since at least 1895 and provided illumination of the Sound and Channels either side of the Island to assist in identifying enemy targets. The main defences were now designed to counter fast torpedo boats attacking Devonport or any Capital Ships at anchor in the Sound. The old 9 inch guns in the casemates were tipped out onto the foreshore where they remained until 1943 when they were recovered for scrap to aid the war effort in World War II. The guns on the Upper Battery were buried as the defensive earthworks were levelled. 4 of the 5 were rediscovered in the late 1970’s by the Adventure training staff looking for the mythical tunnels to the mainland. They were eventually recovered by 59 Independent Commando Squadron Royal Engineers and remain on the Island today.

The Island was now manned by a mix of the Royal Artillery and their significantly more handsome and intelligent comrades the Royal Engineers. In 1892 Capt Gundry RA assumed command of the Artillery on Drake’s Island and a number of Volunteer units also spent time on the Island for their annual training including the Yorkshire Brigade Artillery Militia in 1893 and both the 1st and 2nd Devonshire Artillery Volunteers on a number of occasions. Next week I’ll look at the Invasion of the Sound by 6 foot Slimy Devil Fish.