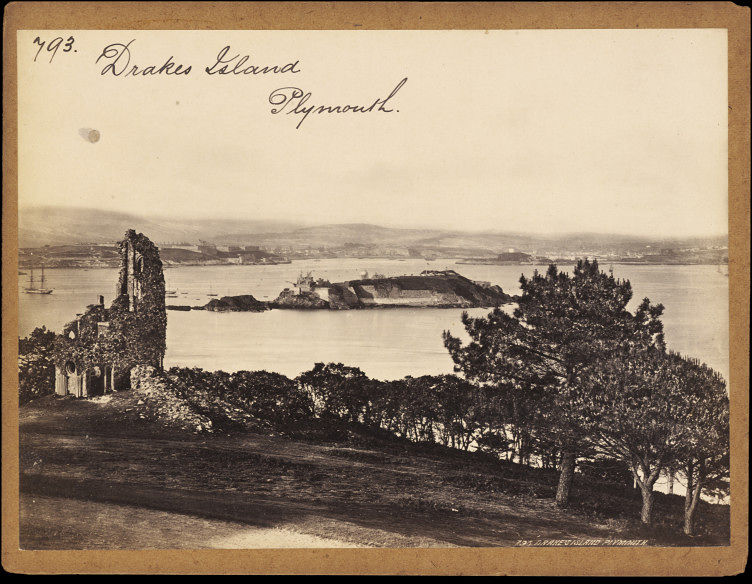 After the botched attempt to diversify into brandy smuggling and national scandal involving Lieutenant Harris, Captain Hort and their fathers the rest of the 1850’s was quite eventful though for a number of different reasons including the reorganisation of the Militia, the Crimean War and some technological advances that would lead to a major reorganisation of the defences in the next decade.

In November 1851 a detachment from the 77th Regiment of Foot was manning the Island and showed the Garrison in a positive light. During bad weather Thomas Wright, a waterman was sailing his small single mast boat when he got into trouble and drifted onto the southern foreshore of the Island. He was clinging onto the mast for dear life when he was rescued by Privates Kavanagh, Sullivan and Farley who also salvaged his boat. Early in 1852 they were awarded a Pound between them by the local Humane Society for their efforts. The 77th were replaced by a detachment of the 19th Regiment of Foot by April and they in turn saved three seamen from HMS Wilberforce. On hearing cries of distress from the west of the Island at around 2.30am Capt Hooke gathered soldiers from his own Regiment and the Artillery detachment to investigate. Despite the difficult conditions, darkness and the tide running they found and found the seamen in a sinking boat and rescued them just in time as the boat sank shortly after the rescue. The Major General Commanding Western District congratulated the rescuers “for the zeal and assiduity displayed, whereby they had the gratification of saving the lives of three of their fellow creatures”. However it wasn’t all heroic rescues and Well Done You’s from the top brass in September a small detachment of Gunners from the Artillery detachment were sent to purchase spirits in the town and carry it back to the Island. I’m not sure what possessed the Officer to think that would be a good idea and unsurprisingly the Gunners instead drunk the spirits and in their intoxicated state succeeded in capsizing the boat on the way back but fortunately no lives were lost.

Some major and minor works were still being done on the Island and a tender was put out for constructing a water tank in 1852 and in 1854 a tender was put out for constructing the sea wall on the south of the Island. By this time presumably to oversee the construction a Clerk of Works, Charles Senby, was on the Island and the building firm Greenwood and King were also on the Island undertaking the works. Regular contracts were also being advertised to supply the Plymouth garrisons including on the Island with cleaning services usually for a three year period and consumables such as flour, bread, meat and forage for a 6 month period.

In between times 1853 saw Britain and France declare war on Russia in what was to become the Crimean War which lasted until 1856 and included the famous Charge of the Light Brigade. The Island as usual became a staging post with detachments from various regiments using the barracks temporarily before being shipped out and being held there at times when returning. The reserve forces underwent a change with the militia being reorganised. From being a general county militia they were now raised as County regiments of Infantry with separate regiments of Artillery. In 1853 Devon raised 2 infantry regiments and one of Artillery which were reorganised again in 1859 when the Artillery Corps of 367 men became known as the 1st Devonshire Artillery Volunteers.

The end of the Crimean War saw the troops return to Britain including a number of Jaeger Regiments from Hesse and Hannover. We were still using German troops as our Royal line was descended from the Electors of Hannover when George I was invited to become King. However they were now becoming a drain on the nation’s finances and Captain S. Yon Scuartzonbom’s Company No. 3 of the 3rd Jaeger Corps was on the Island. In 1856 some of the Jaeger Corps mutinied and Sergeant Collins who was based on the Island was court-martialled for insubordination towards a General on a parade. As a result the Jaegers were disbanded, given 12 months pay and free passage to either America or Germany.

During this period the first Ironclad war ships started to be designed with the first, a French warship, appearing in 1859. Powered by steam they were faster than wooden boats and able to withstand the recent advances in explosive and incendiary shells. In turn cannon technology including metallurgy to allow the cannon to use larger amounts of gunpowder to fire larger shells and the use of breech loading guns as opposed to muzzle loading guns were being developed. The Island was used from 1854 for various tests on the loading theories for the new breech loading guns in development.

By 1859 there were concerns about the Emperor Louis Napoleon of France and his continental ambitions especially as he had launched the first Ironclad warship. As a result there was a Royal Commission on the Defence of the United Kingdom into the threat posed by the French Navy. As part of its remit Col Wright RE, Capt Stace RE and Maj White RE accompanied by RA and RN Officers of the Commission visited Plymouth including the Island in June. Their Report, published shortly afterwards recommended the existing battery in the centre of the Island be replaced by 5 x 12 in muzzle loading guns and a new Battery of 21 x 9 in Guns in a Stone casemate arc with iron shields be constructed on the east of the Island covering the passage from the breakwater. It also recommended an underground magazine and tunnel system to support the new batteries and was critical of the state of the barracks. The Commission recommendations were accepted and I’ll cover their construction which started the next year in 1860 and took the next 10 to 15 years in future blogs.