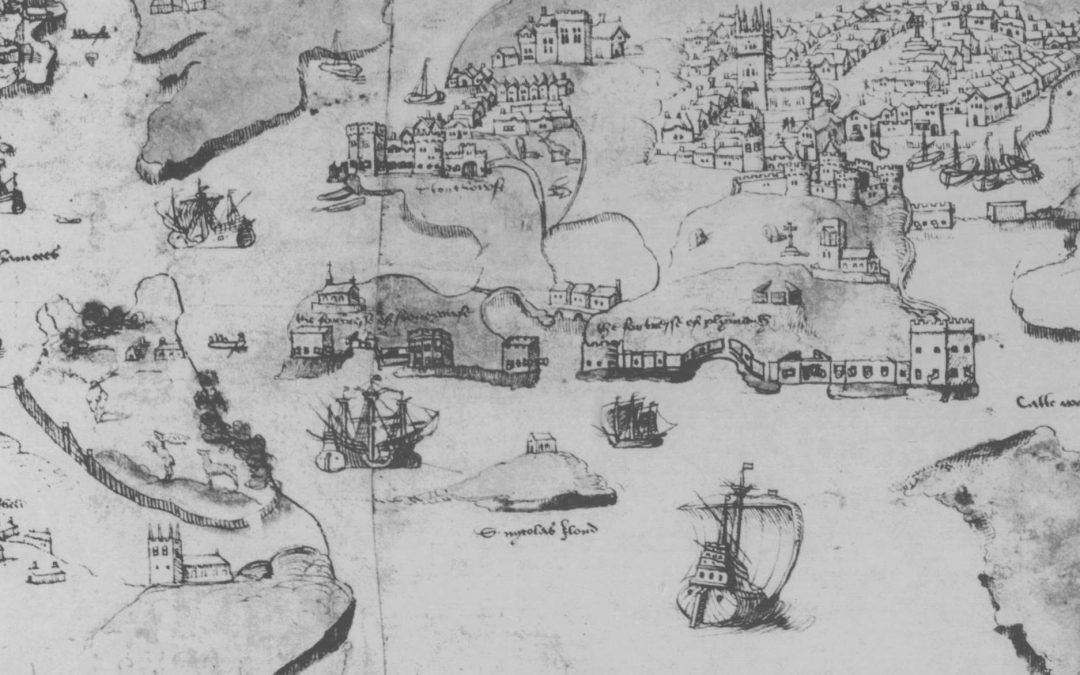 St Michael’s Chapel is the first recorded building on Drake’s Island. Its earliest mention is in 1135 during the reign of Henry I. What we don’t know is who built it, why and when? Unfortunately there are few contemporary written records and we are reliant on later records that are sometimes contradictory. However there are some clues to look at and try to solve the mystery. Firstly we know it was a stone building as it was demolished to make a Tudor artillery tower in 1549. The population was not large in the area. The Domesday Book, a record of all households and holdings in England and written for William I (the Conqueror) in 1086 is the closest accurate record. On the Devon side, Sutton which eventually became Plymouth has 7 households, and Stonehouse a very lonely 1 whilst in Cornwall Maker has 18. It’s unlikely in the next 50 years the population increased that much. From this the chapel is most likely Norman. The Normans built all their chapels from stone whereas the Saxons tended to use timber and reserve stone for large churches used by Lords and the area both in Devon and Cornwall is small holdings. From a 1540 map the chapel seems to be of typical Norman design although some Saxon churches were similar.

If it is Norman then it would have been built during the reign of William I, his successor and third son William II also known as Rufus or from 1100 his fourth son Henry I. So who owned the land? After the Norman Conquest in 1066 a lot of land in Cornwall was granted by William to his half brother Robert who was also a leading supporter and commander in William’s forces. Robert in turn rewarded his supporters and the Island and Barony of Trematon was held by Reginald de Valletort. The Valletort Family were tenants of Robert in Mortain, a county in Normandy and came across to fight alongside Robert. Reginald held the Barony until his death in around 1123 which is confirmed in various Royal Charters, including the Charter of Henry I on his accession to the throne in 1100. After Reginald died it passed to his son Roger until his death in 1163 well after the chapel was built. So it seems likely that either Reginald or Roger would have built the Chapel but when and why?

18th century reports suggest it was a small chapel or single cell. In those days cell would mean a single room. It is built on a relatively inaccessible Island away from any of the local hamlets. This suggests it was not a communal place of worship for regular services as the local population would have lacked the means to access the Island. Contextually back in the 11th and 12th Centuries God was for most people all powerful. If you were successful it was because you were pious and worshipped God and if you failed it was because you were not worthy and having God on your side was taken very seriously by the nobility. Before the Norman Conquest William had obtained the support of the powerful Abbey on Mont St Michel in Normandy who helped persuade the Pope to support his claim to the throne of England. There was also some significant praying by all the lords and knights when the fleet was stuck in Normandy waiting for favourable weather. In all this begging for church support and praying there would be a considerable amount of vows made, often to glorify God by building a place of worship should he grant them victory. These were known as votive chapels and were often visited as a kind of pilgrimage to give thanks for the victory granted to them. Additionally the name, St Michael could be significant. Firstly both Robert and the Valletort family fought under the banner of the warrior saint St Michael and secondly was the location chosen because of its similarity, albeit on a much smaller scale to Mont St Michel in Normandy another place of worship on an island.

But exactly when? Robert died in 1095 and Reginald in 1123. If it was a votive chapel for the Conquest it would seem likely it would have been built during their lifetimes. The balance of probability would suggest earlier rather than later so as to fulfil the vow and avoid the wrath of God and possibly before William I died in 1087. Although a simple design the architect would most likely have been a clergyman. As they could read and write most lords employed them to run their affairs and this included building works. William I had an appointed Kings Engineer, Bishop Gandulf who designed and built the Tower of London and Rochester Castle amongst other major works. So it is likely Reginald had his own ecclesiastic engineer to build the chapel. The daily work would be overseen by a Clerk of Works who would have been another clergyman, most likely a monk chosen for their ability to read and write allowing them to interpret the drawings and instructions for the work force. Unfortunately we have no detailed description of the chapel. If it was complicated single blockwork then it is likely masons were bought over from Normandy to build it. If the walls were rough double blocks infilled with rubble then this would be typical of the use of local unskilled labour. The chapel is always described as on the crown or summit of the Island and most charts do show the chapel or the buildings that replaced on the highest point of the Island.

So in the absence of any other evidence my thoughts are it was a Norman votive chapel built by Reginald de Valletort to give thanks for the victory over the Saxons at Hastings in 1066. It had probably been built by the time of his death in 1123 and possibly much earlier during the reign of William I. Next week a look at the early owners of the Island, the Valletort family and Priors of Plympton.