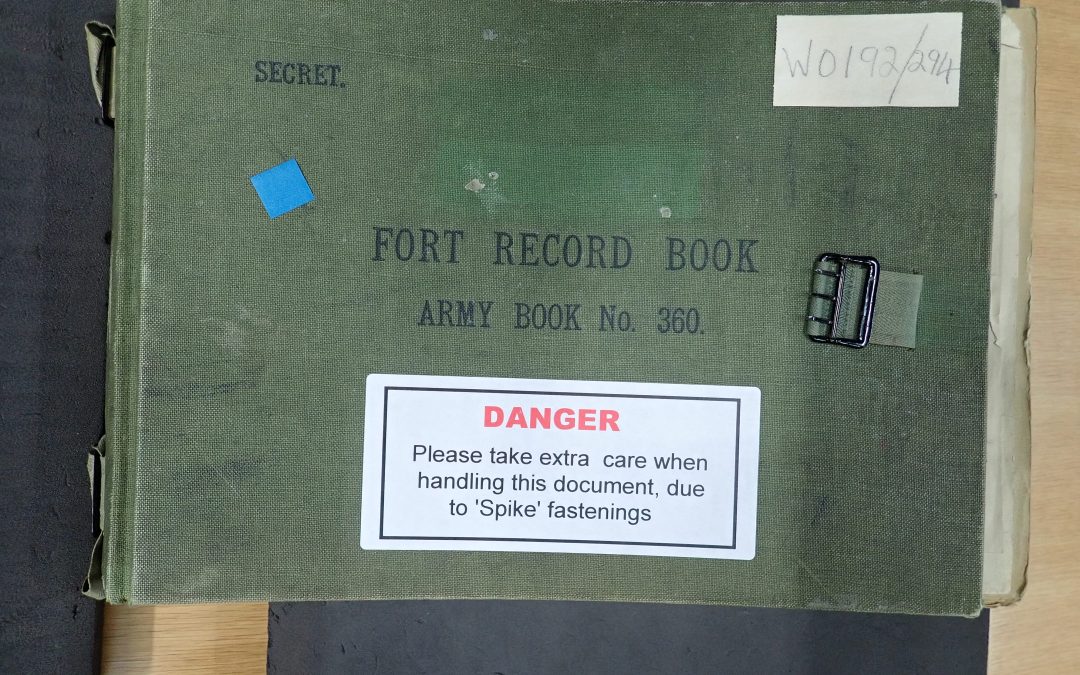 I have been looking through a whole bunch of Island records that we have recently obtained. They are photo’s of declassified and ancient records. The earliest are from the early 17th Century so date from just after the first set of Tudor Buildings were completed by Queen Elizabeth I Trench Master or Engineer, the Italian Federico Genebelli around 1605. Unfortunately in some cases these are fragments and the writing is nearly impossible to decipher. This is partly as although English was the common spoken language Anglo-Norman and Latin were more often than not used for official documents and I haven’t had time yet to correctly identify the language and try and translate.

Whilst the plans for the Palmerston Casemates and Underground Magazines and Tunnel Complex which were built from 1861 to 1871 aren’t there surveys done after completion in 1881 and in preparation for the construction of the Breech Loading Batteries in 1898 and 1901 are there. Also there are the records for the defence of Plymouth which were rewritten as the Breech Loading Guns were deployed to replace the large muzzle loaders. The detail in the written records is immense and includes detail right down to the train timetabe to deploy the territorial force in times of a heightened threat.

The later charts show the use of buildings in WWI and WWII together with the Fort record for WWII and the subsequent hand back of the Island to the Duchy of Cornwall. It also shows the early interest from the National Trust in the Island.

The latest documents are the proposed plans drawn up by to alter the buildings for the benefit of the Drake’s Island Adventure Centre. These charts and records also confirm earlier research about the Island and in some cases add weight to the thoughts on the more frequently raised questions about the Islands history. For example none of the records indicate a tunnel from the Island to the mainland either on a chart or map nor in the written records which detail how the Island will be resupplied which is always over water. The hand back of the Island shows the Island was considered Crown Land and the justification in law.

As you can imagine there is a lot to sift through and I am trying to cross reference with earlier blogs to highlight if these new finds change any of the earlier interpretations of the Islands history. Over the coming weeks and probably months I’ll be blogging about the more interesting details I turn up and because the records especially from WWI cover the whole of the Plymouth and South West defences it will also include some wider detail of the Devon and Cornwall Territorial Forces. What is great for me as a Sapper Veteran is the Island i still in use by the military, the Royal Marines conduct training including the final attack of the recruits final exercise on the Island and the Royal Engineers will be continuing their long association with the Island by carrying surveys. just as their predecessors did over the Summer.

I’ll look at some of this new information in more detail over the coming weeks.