How the Island looked in 1881 including Skittle Alley 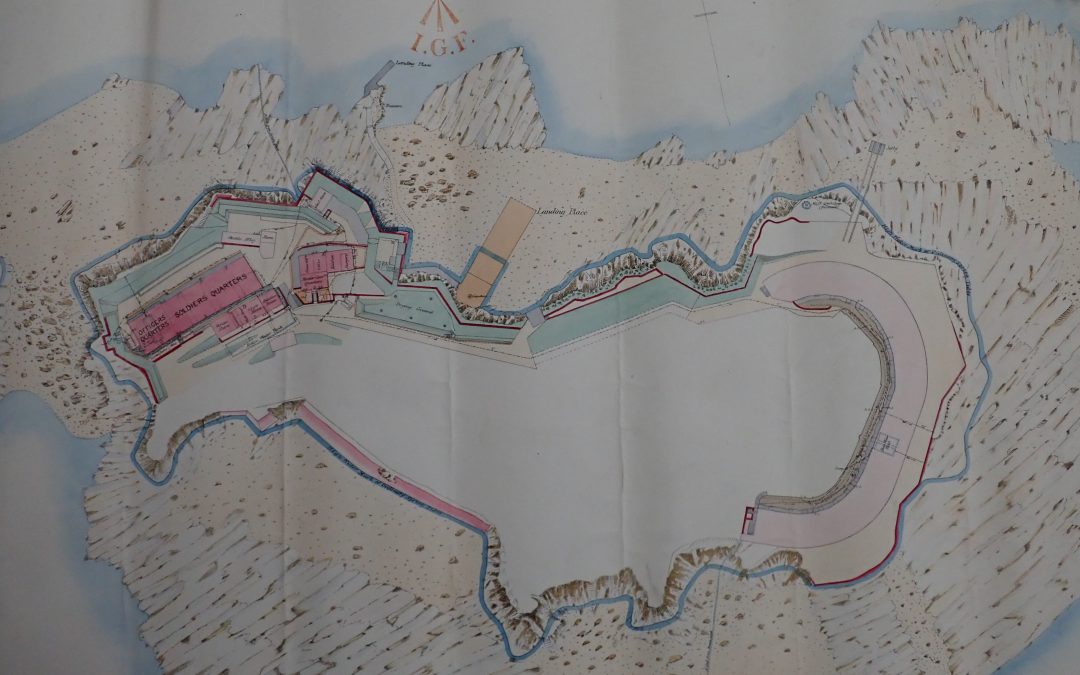 A few more fascinating documents to explore that have recently come to light. It’s the 1881 Barrack Plan for the Island surveyed and drawn up by the Royal Engineers. It was a decade after the completion of the Palmerston or Napoleonic Casemates which contained the 9 inch, 12 ton Rifle Muzzle Loaded Guns and Upper Battery which housed the 11 and 12 inch 25 ton Rifle Muzzle Loaded Guns. Only 13 of the casemated guns were ever delivered although all 5 of the larger guns would have been in place. The Upper Battery isn’t shown and Casemates only in outline as the Barrack plan wasn’t concerned with those parts of the Island. The remit for the survey was the buildings and their use together with any associated features such as water tanks and drains. A detachment from 7th Brigade Royal Artillery was garrisoning the Island when the plans were being drawn up. The plans were made under the direction of Colonel Whitworth Porter RE who coincidentally had designed Fort Picklecombe as part of the defence plan that also incorporated the Palmerston Casemates on the Island. They were then zincograhed (an old means of producing a plate for use in printing) and printed at the School of Military Engineering (SME) at Brompton Barracks in Kent. They contain the Appropriation Table which shows the planned use of the buildings and also has the Accommodation Table which gives the numbers that could be housed on the Island.

The map shows three landing places but doesn’t indicate that are any tunnels to the main land although numerous drainage systems are shown. The three landing places are the one that ran out directly from the entrance which can still be seen at low tide. The larger landing place which was replaced by the current jetty and included a slipway to haul the Island boats out of the water.

The third landing place was in front of the casemates and is the gun wharf and ramp built by Lt Hare of the Royal Engineers and used by him and his detachment of Sappers to haul the big Rifle Muzzle Loading Guns up onto the Island in 1872 prior to the Iron Blast shields arriving on the Island.

The Accommodation Table shows space for 5 Officers, 1 Staff Sergeant (the Royal Artillery has Staff Sergeants as opposed to Colour Sergeants). 2 Sergeants and 66 Junior Non Commissioned Officers (Corporals and Bombardiers, the Artillery only dispensed with the rank of Corporal in 1920 when it was replaced by Bombardier who up to that point were the equivalent of lance-corporals) and Gunners which included 2 Batmen (Officer Servants as opposed to Gotham City crime fighters). The table also showed space for 9 patients in the Island Hospital and showed that the total holding of all the water tanks was 104,448 gallons. There was no fresh water on the Island and the tanks were designated as rain water that was collected on the Island.

The plan for the main Barrack which was built around 1755 shows 8 rooms on each of 2 floors that housed 64 JNCO’s and Gunners. This averages at 4 per room which is quite spacious for the time, I was serving at Brompton Barracks in the 1980’s and the rooms then contained up to 8!! However Barrack returns from occupying detachments indicate that one or two of the rooms may have been allocated for the sole occupancy of the Sergeants and the JNCO’s and Gunners were in fact 8 to a room. This would have been quite usual, the plan would show the intended use but how the occupying unit actually used it was up to their CO and Quarter-Master although it wouldn’t change drastically.

The Officers Quarters which was added to the end of the original Barrack Block by 1846 but was not linked internally was again of 2 floors. 2 Officers and the Officers Mess Kitchen were housed on the Ground Floor and the other 3 Officers housed on the first floor together with a social room. The Attic was where the 2 Officers servants would have slept but would have been on call to attend to the Officers. The servants had a separate entrance direct into the attic from the side of the building via a bridge next to what we now call the Ablution Block. Directly behind the Officers quarters was a scullery. This was a place for storing and washing dishes and cooking pots, utensils etc plus a place to launder and iron clothes. The Officers Toilets were to the rear of the scullery. Originally I thought this may have been a sentry post however they could have originally been long drop toilets from previously as the defensive wall and sentry walk runs above the toilets.

The Ablution Block or House D on the Accommodation Table was built in 1846. The ground floor is shown as stores. In 1881 provisions were still provided by civilian firms who tendered for military contracts that were published in the local newspapers. There was no military supply or logistics organisation as such until a decade or so later. The ground floor also contained the cook and wash rooms together with the ablutions. The first floor contained the Barrack Sergeants Quarters and stores plus the Library.

To the rear of the Ablution Block and by the Officers and Soldiers Barrack Block were some additional rooms that were demolished long ago but contained a Larder, Pantry, Wine Store and Engine Room. The supports for the roof can still be seen today. The Pantry was a storage area for food that lasts and storing kitchen utensils, a larder is a cooler room for food that can go off such as meat and milk. The larder would also be used for food preparation prior to cooking in the kitchen. The Engine room would have been what we understand as a generator but the notes state the Barracks were lit internally and externally by oil lamps.

The Governors House is shown as House E. Like the Barrack Block it was built in a couple of stages. Although there were Elizabethan buildings close to the site dating of the stone work suggests that the first elements were built around 1780 and added to between 1830 and 1845. The Ground Floor was the Master Gunners Quarters, by this time usually the Battery Sergeant-Major (Warrant Officer Class 2), Guard Room and Cells plus the Kitchen and Surgery. The First Floor contained the Canteen, Canteen Managers Quarter and Hospital. The Canteen Manager was a Civilian who bid for the tenancy of the Canteen for a fixed period usually 3 to 5 years. He would come under military law and his prices regulated. He would also sell certain provisions such as coffee, tea, tobacco and the like to the Garrison. This often to led to a bit of conflict as there was more than one Manager caught using defective weights and measures to defraud the Gunners but on the other hand more than a few Gunners attempted to pass counterfeit coin to pay for their underweighted provisions!!

On the area between by the outer defensive wall between the Soldiers Barrack and the Governors House was a skittle alley and store. The Skittle Alley was an indoor bowling alley which would not be dissimilar to our modern day bowling alleys. The general idea was that they should be used to divert the men from their main social activity of drinking alcohol but I don’t know how successful that was, incidentally the Garrison still had a beer and rum ration at this point as the water was still unfit to drink. A coal store was located just past the entrance courtyard.

The Drying Ground to the rear of the Governors House was as its name suggests a drying ground for laundry although in the winter months laundry would have to be dried indoors. The drying ground would also have drying posts for attaching clothes lines and hanging the laundry. The laundry would be done by the batmen for the officers and wives of the married soldiers would often provide a laundry service for the single soldiers. The 1871 census of the Island shows 3 wives, Louise Watson, Ann Brewin and Ellen McCabe all listed as Laundress’s. The plan notes show that the Island was mainly paved with a mixture of a gravelled surface, pitcher pavement, tar paving and flag paving, pitcher and tar being very much like asphalt. Additionally the steps running alongside the Governors House weren’t installed until the 1970’s at the time it was a gravel ramp.

The next blog will look at the incorporation of the new Breech Loading Batteries and how the plans developed to man the Island for War which were enacted in 1914.