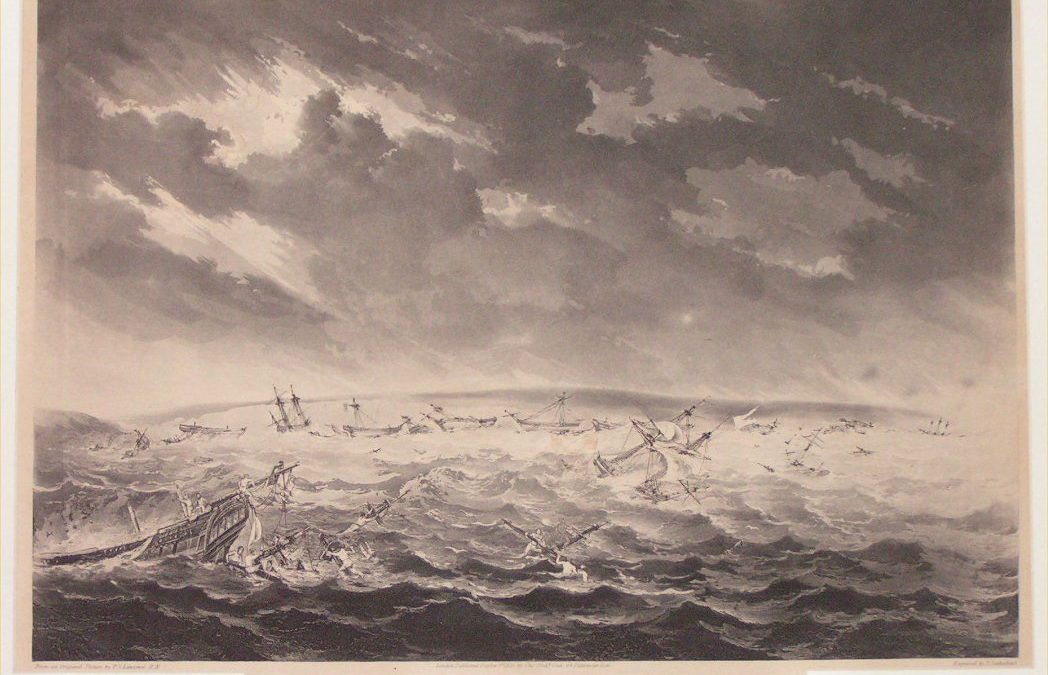 I’ll try and give a snapshot of Island life this week as there were no major events on the Island until 1846 when a new battery of guns, new buildings and annexes to existing buildings were constructed. The Plymouth Breakwater was sufficiently complete by 1814 to give some protection to ships in the Sound and to channel ships entering Plymouth. The safe way around the Island was still between the North of the Island and Plymouth. It was around this time the Island became known unofficially as Drake’s Island with some newspapers using the name and even Queen Victoria using Drake’s Island on some sketches she did of the Island on visits to Plymouth in the 1846 and 1852. However it was still called St Nicholas Island on official documents and although as time moved on even they began putting Drake’s Island in brackets afterwards. A year later in 1815 Napoleon Bonaparte was defeated at Waterloo. He was held on HMS Bellerophon anchored in the Sound for two weeks before being taken to Saint Helena where he would die in exile. From then on as far as the Military was concerned from then on although there were a number of small scale conflicts in Africa and Asia and with Europe at peace it was more a time of policing the Empire rather than outright war.

On the Island there seems to have been a constant garrison of an Artillery detachment of varying size and Infantry detachment of no more than a company and frequently less. The defences on the Island had some minor repairs but remained the same layout. A Barrack Block, Married Quarters and Guardhouse at the west of the Island where the current Barrack Block and Governors House is with a barracks converted to a magazine store behind and to the east of the Governors House. Officially the barracks was rated as sufficient for 3 Officers and 59 Other Ranks although there were still a few married quarters and previously troops had been squeezed onto the Island as required. The main Battery on top of the Island was supported by other gun emplacements around the Island.

There was a canteen on the Island although the Sutler had become known as the Canteen Manager and although subject to Military Law and supervision was regarded as a civilian. He still paid rent for the use of the building in exchange for being able to sell his merchandise. In 1818 Samuel Law was recorded as the keeper of the canteen on the Island as a witness on the marriage certificate of George Mahon who was recorded as the Master Gunner on the Island. A few years later in 1826 there is a letter from Sir John Cameron, the General Officer Commanding Western District concerning defective weights and measures being used by the Canteen Manager on St Nicholas Island which was not an unusual gambit by shopkeepers of the time.

As far as the Artillery were concerned a company of Invalids manned the Island until 1819 when the unit was disbanded. However George Mahon, the Master Gunner, who was not on the Invalids strength but part of the regular strength was retained along with 5 Artillery invalids to assist in maintaining the Guns. Sergeant Major Mahon was replaced as Master Gunner in 1832 by Sergeant Major Thomas Hawser. There were regular Artillery Companies rotating through both Plymouth and Devonport who could have been used to reinforce the artillerymen on the Island until 1853 when the Militia was reorganised and a Devon Artillery Militia was raised for coastal defence. However given the lack of Barrack space it is possible they only came across for maintenance and training if at all rather than as a permanent garrison.

The Infantry on the Island were detachments from various regular Regiments of Foot. Plymouth was one of the major embarkation points for Regiments deploying overseas for duty in the Empire and returning. It also housed a number of depots for various Regiments where replacements could receive some final training before being sent overseas. These Regiments would provide detachments for garrisons for various defences around Plymouth including the Island for varying lengths of time between a few months and a couple of years. Between 1824 and 1850 17 different Regiments provided detachments for the Island. A detachment of company size would be around 80 men commanded by a Captain but it seems from newspaper reports that the detachment to the Island was often commanded by a Lieutenant or Ensign with a body of around 30 men but it did vary. The detachment of the 25th Regiment in 1839 was a Captain and 40 other ranks whereas in 1843 the 75th Regiment provided a Lieutenant, a Sergeant and 30 Other Ranks and in 1848 the 54th Regiment detached a Captain and 60 men to the Island.

Their living and working conditions would have been as described last week so life would have been tough but a variety of incidents in and around the Island were recorded in official records and the newspapers. Even though the Breakwater now provided some shelter ships were still running aground on the Island and in most cases being able to be refloated with little or no damage. The following are some of the few cases where ships were lost. The Endeavour went aground on the back of the Island when her cables broke in 1818 and broke up with little of her cargo saved. The Manlius, a French merchantman carrying wine was driven aground on the North East shore (in front of where the casemates are) during a gale in late 1821 but the cargo was saved although it doesn’t say if the ship was saved. In 1824 the Orange or Olive Branch carrying a large fish cargo missed a navigation point during a gale and broke up with the loss of her cargo on the rocks at the back of the Island. The crew was recovered to the Island although it’s not clear if all survived as Lt Baird commanding a detachment of the 24th Regiment of Foot on the Island sent a letter to the Mayor of Plymouth informing him the body washed up on the shore the previous week during the gale still hadn’t been collected.  1830 saw the Charity was wrecked and broken up during a gale along with the Emulous. Samuel Law was still the Canteen Manager at this time and his son George who had just been paid off from the Navy was staying with him. Unfortunately George lost his life trying to help save the cargo of either the Charity or Emulous when a wave swept him from the rocks into the sea where he drowned. His body was recovered a while later in Jennycliff Bay. The Law’s don’t seem to have had much luck as James Law who was listed as a brewer on St Nicholas Island and presumably a relative was declared bankrupt at Exeter Court House in 1833.

The annual Plymouth Regatta began in 1823 and newspapers report that the races were watched by thousands at various viewing points including the Island although I would guess that it would military and invited guests rather than the general public that watched from the Island. In 1832 restrictions on “Parties of Pleasure” visiting the Island were lifted although the newspaper report doesn’t when or for how long the restrictions had been in place. It is difficult to imagine there was general public access inside the Island so it may just refer to the beaches or that the military could now invite people to the Island.

There were also a few reports of officers swimming from the Long Room to the Island or vice-versa in shows of bravado or bets. It is around 600 metres. One incident in December 1832 unfortunately cost Ensign Dewes of the 89th his life when he was “seized by cramp and almost instantly sank. Inability in swimming was ruled out as he done the feat before”. A curious postscript was reported in the news when Pte James Prior of the same Regiment swore that whilst he was staying in Modbury he and his comrades had been entertained by a French Wizard. Pte Prior being a practicing Irish Catholic flew into a rage when the Wizard informed him that one of their officers would be drowned before he could get back to his quarters. Pte Prior demanded how the Frenchman could know this seeing “that the Almighty had not even permitted his own Mother to look into the futurity”. However on return to the Island Pte Prior found that Ensign Dewes had indeed drowned as the Wizard foretold.

The Garrison boat was used for official business to Plymouth but it seems was also available for pleasure use as well. In 1833 in what seems to become a common thread soldiers from the 89th were sent to the mainland to pick up stores. As is the soldiers want they “contrived to get so much intoxicated that in attempting to return they found it impossible to manage the boat” The upshot was an argument broke out that ended up in fight with two soldiers going overboard and drowning with the remainder being rescued by other boats in the Sound. However on the other side of the coin the Garrison often displayed bravery during rescues that they undertook. During the Regatta of 1835 a six oared gig crewed by military officers overturned by the Island. Pte Francis Steward of the 66th on duty on the Island immediately plunged into the waters and saved the life of Ensign McCarty by bringing him to the shore. 1842 saw an attempt by Seaman McGarry to desert from HMS Malabar end on the Island. McGarry was spotted getting into a Richard Anning’s, a waterman, boat to desert. The Malabar’s Jolly Boat was sent after them. McGarry slipped ashore on the Island whilst the Jolly Boat chased Anning. Anning was caught at Firestone Bay whilst McGarry was caught by the Guard on the Island and transferred to Naval Authorities.

Inquests into deaths that occurred on the Island would take place on the Island itself. One was held in 1838 when Pte Patrick Mooney of the 15th of Foot died. The News reported “It appeared that Friday the deceased was sitting in the guard room, when suddenly expired, from, as it appears from a past mortem examination, an attack of apoplexy”, apoplexy being incapacity or death from a cerebral haemorrhage or stroke. In 1843 John Davey, only 22 and an assistant grocer at Stonehouse fell 70 ft from the ramparts on the Island to his death. From the newspaper reports there seems no surprise he was on the Island so presumably there was a contract for his grocer to supply the Island with vegetables and fruit.

In 1844 The Lord High Admiral of the United Kingdom renewed the articles requiring non Royal Navy Vessels to deposit all their gunpowder except an allowance of 5 lbs at St Nicholas Island. This would have been a 24 hour duty for the Garrison to not only accept and return gunpowder but also to guard the magazine.

I hope this gives a bit of an insight into life on the Island during the first half of the 19th Century. Things get slightly busier next week as a large upgrade to the barracks is undertaken, I’ll then be back to Island life and a bit of brandy smuggling before looking at the construction of the Napoleonic casemates.