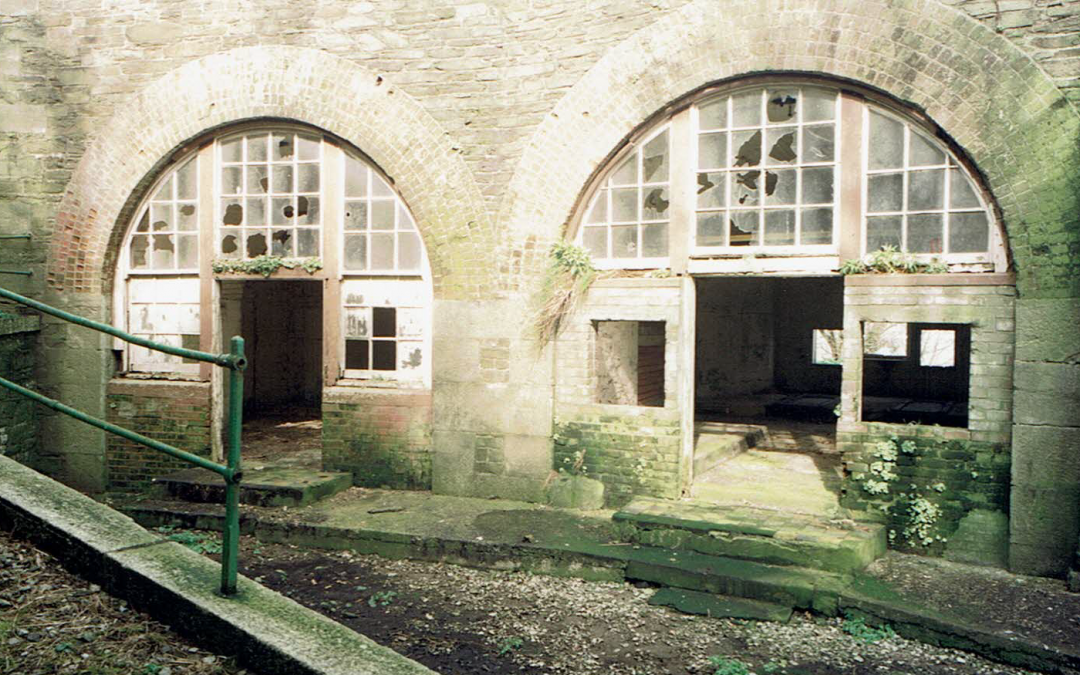 By 1915 the garrison strength had increased to around 300. The Island had 9 guns separated into 3 Battery’s of 3 guns each. 3 x 12 pounder quick fire guns were on the Western Battery and the baseplate for one of them can still be seen. Another 3 x 12 Pounder Quick fire guns were in the Eastern Battery by the casemates and 3 x 6 inch Quick Fire guns were on the centre Battery at the top of the Island. The searchlights were manned by the Royal Engineers. Those on the Eastern side were accessed by a ramp from one of the casemates which led down to 3 rooms at the high water mark. The outer two rooms both housed searchlights with generator in the middle room. It is likely there were searchlights on the Western side as searchlights were used to illuminate for the guns and were often in close proximity as they had to work together but as yet I haven’t been able to find a definitive location. A number of the casemates had already been converted to workshops and store room and a number of other wooden temporary buildings would have been added as accommodation for the enlarged garrison as well as store rooms for the additional supplies required to keep the garrison rationed and equipped.

Nancy Astor opened a recreation hut for the soldiers on the Island provided by her husband Major Waldorf Astor and an appeal went out by the YMCA who ran the facility for magazines, books and other literature to entertain the men. High on their list was either a billiard table or bagatelle board. Bagatelle was a variant of billiards where the ball was launched by a spring or small cue onto the board. The object of the game is to get a number of balls, usually nine, past wooden pins into holes. Penalties occur if the pegs are knocked over and points scored depended on where the ball finally landed. Concerts were regularly held at all the forts in the Sound and local hospitals for the wounded including at Christmas throughout the war. Lt Akaster of the Royal Artillery who was part of the Drake’s Island Garrison set up his own Concert Party from soldiers within the Garrison and local population that performed throughout the local area. The concerts were a mixture of ballads, sing-a-longs to popular tunes of the day, comedy sketches which were mainly monologues and there would have been riots if the show didn’t feature community whistling.

When the Battle of Jutland in 1916 confirmed British supremacy at Sea and the German fleet was confined to its home ports and the threat to Devonport was minimal although the defences remained fully manned and exercised regularly. The Sound remained busy with warships coming and going regularly and both Empire and British troops passing through on their way to France. The garrison saw out the war carrying general duties but on a heightened state of alert so the numbers of personnel on duty plus the number of duties were increased and the troops would have exercised more often than in peacetime. However to give an idea of the lowered threat the garrison still fielded cricket and football teams which were active in the local leagues although due to limitations of space had to play all their matches away!! Local sailing regattas were organised in the Sound as well. They also found time for farewell concerts to personnel who were posted in and out of the Garrison throughout the war as both the Engineers and Artillery post individuals between static units rather than post whole units from one place to another.

The war finished without the Island having to fire a shot in anger and by the end of the war the Garrison was down to 20 Officers, 5 WO’s, 4 Sgts, 2 Trumpeters, 178 OR’s. So it was a quiet war for the Island but it did end happily for Lt Akaster, the Concert Party leader from the Garrison who married his lead violinist, Miss Ethel Allen in 1918.