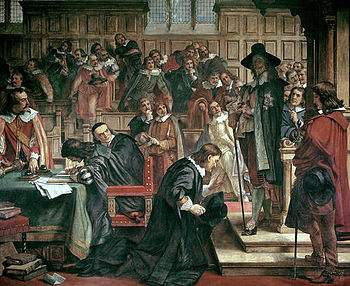 James I when he came to the Throne in 1603 largely bought peace to the new Kingdom of Great Britain. James was also the 6th of Scotland so after centuries of intermittent fighting the two kingdoms were unified and most people were grateful for a peaceful succession and end to the war with the Spanish. There was relatively low taxation, the colonisation of North America had begun and James, despite some flaws, was generally a popular King. However one of those flaws was a belief in the Divine Right of Kings which meant he believed as he was ordained by God he could, if needs be, override any other authority and rule as he saw fit through royal prerogative. He laid all this out in a book “The True Law of Free Monarchies”. This flawed belief was passed onto his son Charles who was crowned as Charles I in 1625.

Unfortunately whilst James was fairly tolerant and didn’t put into practice his beliefs on the Divine Right of Kings the situation was different under Charles. He immediately was in conflict over his use of the Royal Prerogative and his attempts to raise taxes without parliamentary approval.

By 1627 Charles had got Britain involved in the 30 Years War.  Britain’s involvement was limited as Parliament only granted Charles the funds for a spot of piracy against Spain and support of the French Huguenots (a Protestant minority) against France. This meant the Governor of Plymouth Fort and St Nicholas Island, Sir Ferdinando Gorges needed to attend to his military duties to protect Plymouth from attack and prepare for its use as a base to send expeditions overseas. Gorges was responsible for garrisoning 100 men on the Island who were to reinforce the Channel Islands but had no ship to transport them. The small force was quartered at £16 per week until transport was finally found for them. The Island defences were readied including the furnaces for heating the shot. The Duke of Buckingham, Charles favourite at court was chosen to command the expeditions and up to 90 ships and 10,000 soldiers were assembled in Plymouth and the Sound. The expeditions were poorly supplied and funded and the man responsible for providing the supplies, a local merchant and one time Mayor and MP for Plymouth James Bagg, was accused of embezzlement along with Buckingham. The military failure led to most of the soldiers being abandoned in Plymouth on their return. Many hadn’t been paid and Plymouth was the scene of intermittent riots and outbreaks of disease over the next couple of years.

Because of his military failures and the accusations of embezzlement the Duke of Buckingham became incredibly unpopular. This was exacerbated as he was protected by his equally unpopular patron Charles I. In 1628 Buckingham was assassinated by John Felton a wounded and disgruntled army officer. Such was Charles and Buckinghams unpopularity that Felton was proclaimed a hero by the majority of the population. Charles was also having difficulty raising more funds to carry on the wars and both conflicts were petering out. In 1629 this gave Sir Ferdinando Gorges the opportunity to resign as Governor of the Island. On Jun 30th Charles I replaced Gorges with a grant “to James Bagg and Arthur Chichester during their lives of the office of Captain and Governor of the Castle of Plymouth and Island of St Nicholas with the fee of 56s per diem (day) for the maintenance of the Garrison and other privileges as were formerly granted to Sir Ferdinando Gorges who lately enjoyed the said office”. This was the same James Bagg accused of embezzlement and although it appears a shared appointment it was Bagg who was the senior appointee.

In 1630 Charles made peace with both France and Spain. Domestically he dissolved Parliament and ruled for the next 11 years by Royal Prerogative, a period which became known as the “Eleven Years Tyranny”. After 1630 a lot of Bagg’s time was taken up with defending himself against accusations of embezzlement during his time as supplier to the Fleet. Bagg claimed he used his own funds whilst waiting for the release of those monies promised to supply the expeditions which had some justification given the finances of the time were complicated with the King trying to circumvent Parliament and various factions all vying for the profit to be made out of war. It appears the Island was under supplied and payments for the Garrison were not made as in 1636 Bagg requested ammunition, supplies and pay from the Office of Ordnance. As the Office said it could not certify his demands without a survey the request was deferred.

More interestingly in 1637 there is possibly the only occasion the Islands guns fired in anger at a ship. The Flying Hart, a merchantman was impounded on the request of Paulo Lopez Camero, a Spaniard who claimed the ship took his in the West Indies. It was reported by Bagg that “The Master of the Flying Hart, John Allwyn or Alwinson weighed anchor and sailed out of the Sound despite being fired on by the fort and Island”. The Flying Hart was retaken shortly afterwards in Cawsand Bay by ships despatched by Bagg.

James Bagg died in 1638 and Jacob Astley was appointed Governor of the Island. Astley was a committed Royalist in contrast to the Parliamentary supporting Plymouth Corporation. However by this time, 1639, Charles had managed to vex the Scots by trying to impose his religious views on them and became embroiled with what were known as the Bishops’ Wars. Therefore Astley was often away from his post commanding troops in the war against the Scots. The tensions between Parliament and Charles increased with Parliament refusing to agree taxes for the war and Charles having to agree humiliating peace terms with the Scots in 1640. For the Island with Astley away the defences and Garrison were largely neglected. Garrison wages were unpaid, the Lt Governor Thomas Gay was due £30 per annum, the wonderfully named Polydore Roche as Master Gunner was due £20 pa, Thomas Roche was due £30 as a Lt. and 30 others at £12 pa. The munitions were limited and the 70 barrels of powder were 5 years old and required replacing. In 1640 William Hele, Mayor of Plymouth, deputised as Governor of the Island along with George Bagg (son of James). Hele rectified payments owed to the garrison for wages, increased the munitions and by 1642 it was reported “a bulwark of exceptional resistance crowned the summit of the Island”. During this time tensions between Parliament and Charles worsened as Charles tried to arrest 5 MPs in the House of Commons. The MPs fled into hiding but both King and Parliament began to raise armies. On the outbreak of the Civil War in 1642 Astley was called away again by Charles to Oxford to command the Royalist Infantry. The Corporation of Plymouth, in the absence of any Royal representative or Royal forces, appointed one of Parliaments supporters Sir Alexander Carew, as Governor of the Island knowing it would be key in defending Plymouth in the Civil War. This was crucial for Plymouth as the West Country, especially Cornwall, was largely Royalist and decades previously Sir Francis Drake had rightly declared “He who holds the Island holds Plymouth”. The Island would show Drake was right and prove crucial in defending and resupplying Plymouth during the coming 4 year Royalist siege which we will start to look at next week.