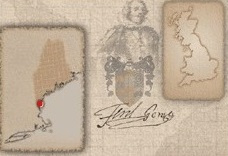 The Crown appointed Sir Ferdinando Gorges as the Governor of the Fortress of Plymouth which included the defences and Garrison on St Nicholas, later Drake’s Island in 1995. Ferdinando himself led an intriguing life both before, during and after his time as Governor of Plymouth especially as he can be considered a founder of the State of Maine in the USA and granted the Pilgrim Fathers a land patent to settle on his company’s land. As it’s Mayflower 400 year I thought it would be interesting to take a brief look at his life and his early influence in the New World.

Born around 1565 he was the second son of Edward Gorges and Cicely Lygon. The family came over with William the Conqueror in 1066 however the male de Gorges line died out in 1331 with Ralph de Gorges who bequeathed his estates to a younger son of his sister Eleanor who had married into the Russell family (another Norman family that arrived in 1066) on condition that he adopted the Gorges name. So Ferdinando on the male side is a Russell. He received a small inheritance, a gold chain worth £100 and the manor of Wraxall in Somerset on the death of his father soon after he was born but with the main inheritance going to his eldest brother he would have needed a career to sustain him. Around the age of 18 he made soldiering his career hoping to find a patron or benefactor to help make his fortune. In 1587 he served as one of the “eminent chieftains” of an 800 strong English contingent attempting to relieve the Dutch seaport of Sluis against Spanish forces. It seems he was taken prisoner during the attempt and was among those exchanged late in 1588 for Spanish prisoners from the Armada. After marrying an Essex girl, possibly for her money, in 1589 he served for the next two years in the armies sent by Elizabeth to aid the protestant Henri IV of France. The armies were commanded by the Earl of Essex who was so impressed by Gorges that he knighted him in the field after the siege of Rouen where he was badly wounded. Essex then took an interest in Gorges career and became his first benefactor. Gorges reputation was enhanced by Henri IV of France recommending him to Elizabeth I as a “very sufficient gentleman who hath gained a very great reputation for his valour and conduct in war”.

In 1596 after commanding a garrison in the Low Countries Essex’ recommended Gorges was made the Governor of Plymouth including St Nicholas Island. Duly appointed Gorges oversaw the defences of Plymouth in the invasion scares that followed the defeat of the Spanish Armada. Unfortunately in 1599 Essex having fallen out of favour began conspiring against Queen Elizabeth. Although loyal to Essex he managed to distance himself from the plot but was removed as Governor in 1601 due to his initial involvement. Even more fortunately Gorges found a new benefactor in the Queens Secretary, Robert Cecil. Cecil persuaded Gorges to testify against Essex but due to the seriousness of the plot Gorges was imprisoned. However after Elizabeth died Cecil persuaded James I to have Gorges reappointed as Governor of Plymouth and St Nicholas Island in 1603. James agreed and confirmed it in writing “for some displeasure conceived by the Queen our sister deceased Sir Ferdinando Gorges was removed from the charge of the new fort at Plymouth and of St. Nicholas Island. And that since our coming to the Crown the said Sir Ferdinando Gorges hath given such satisfaction in the former matters, as we have been moved to restore him to that charter and have granted to the said Sir Ferdinando Gorges our letters patent of the charge.”

England was still at nominally at war with Spain until the Treaty of London was signed in 1604. Now with relative peace Gorges got caught up in the enthusiasm for overseas trade and discovery especially in the Americas. At the time the colonies were funded privately by a group of investors, or shareholders setting up a Company for that purpose. The Company would then petition for a Royal Charter giving it permission to control a set amount of land. Some Charters overlapped giving more than one company the right to settle the land with ownership going to the company that successfully settled the land first. The Company financed the establishment of any colony and in return controlled all land and resources there. In turn the Company would set up a contract with a group of settlers who would agree to pay back the cost of their trip with interest. The terms of the contract often included the amount of work that was to be done on Company land, what would happen to the settled land at the end of the contract, who would provide clothing, building materials, weapons and so on. To complicate matters somewhat being Royal Charters they could be revoked or amended at the discretion of the Crown.

Gorges first foray into colonisation was as a leading shareholder of the Plymouth Company. The Company was granted a Royal Charter of lands on the north-east coast of America in 1606. Together with another shareholder, the Lord Chief Justice John Popham, he funded an expedition of 120 colonists that left Plymouth in 1607 led by George Popham the older brother of John. They founded the Popham Colony in what is now Phippsburg. Maine. It was not a success, half the colonists returned soon after arriving as it was too late to farm and they failed to establish trading relations with the local Indian tribes. The death of George Popham a year later in 1608 left the colony without a leader and the remaining colonists abandoned it and returned to England.

Although Gorges became the head of the Plymouth Company there were no expeditions and it effectively ceased trading. However in 1620 Gorges became one the driving forces behind the Council for New England which petitioned James I for a Royal Charter. The Charter was granted in November giving the Council ownership of the land between 40 and 48 degrees north, roughly from present day Philadelphia to St John’s, Newfoundland. The Charter came with extensive governing, trading and development rights.

Initial funding was raised from the 40 Councillors at £100 each and profits were intended to be made through selling land and fishing licences. However the charters were essentially a monopoly which soon became unpopular especially with those who bought the land and fishing rights. The specific financial conditions of the rights especially if they were bought by a group of merchants were frequently challenged in England’s courts. Gorges was in constant legal battles with Bristol Merchants and Fishing Companies over the annual cost of licences and percentage of catch he was entitled to.

Among the earliest of the council’s many grants was one in 1622 made jointly to Gorges and Captain John Mason called the Province of Maine, between the Merrimac and Kennebec rivers in modern day New Hampshire and Maine respectively. Whilst some small fishing and trading stations were founded an attempt to impose an overarching governing structure by Ferdinando’s son Robert failed. Then the death of James I in 1625 changed the situation both at home and in the New Colonies.

James I was succeeded by his son Charles I  and by 1627 he had got Britain embroiled in the 30 Years War (which broke out due to religious tensions in France). Gorges therefore had to concentrate on his duties in Plymouth and on St Nicholas Island. 100 men were garrisoned at £16 per week on Drake’s Island in readiness for possible fighting in the Channel Islands and the Island was fully armed. Gorges had to delay any new projects in the Americas until the either the War with France concluded or he could leave his command. By 1629 due to a lack of funding from Parliament hostilities had virtually stopped and Gorges was allowed to resign his command. The war ended in 1630 but by now Gorges was concentrating on his American ventures.

A significant development occurred whilst Gorges was distracted by his military duties. The Massachusetts Bay Colony was granted land, confirmed by Royal Charter in 1629, to settle a colony on land that overlapped with Council of New England Land granted to Gorges and his major partner John Mason. In the same year Mason and Gorges decided to divide their territory, Mason took the land between the Merrimac and the Piscataqua, which he called New Hampshire, and Gorges that from the Piscataqua to the Kennebec, which he continued to call the province of Maine. Gorges developed his province of Maine by issuing land grants, which encouraged a small stream of settlers, and financing a few fishing stations.

With the loss of land to the Massachusetts Bay Colony Gorges now tried to gain control over all of New England by establishing a Government led by himself. Towards that end in 1635 he engineered the dissolution of the Council for New England and surrender of its charter in return for his appointment by Charles I as governor-general of New England and retaining the reduced lands of Maine. He intended to oversee New England in person and planned to go to America for the first time with a large retinue to impose his authority, However In 1635 the ship that was to have taken him to New England was wrecked in launching and although holding appointments in the Americas he would now never actually land there. In a further personal blow his close friend and associate in his American ventures John Mason, died soon afterwards. Now nearly bankrupt he lacked the resources to implement his grand plans. He did try a smaller version in his province of Maine, for which he received a royal charter in 1639. He sent as deputy governor a distant cousin, Thomas Gorges, who was moderately successful in setting up a rudimentary government.

Sir Ferdinando Gorges still hoped to visit America but the beginning of the civil war in Great Britain intervened and in 1642, aged 74 he raised a cavalry troop in support of the royalist cause taking part in several actions. Sir Ferdinando died, disappointed and impoverished, on 24 May 1647 in Ashton Phillips, Somerset. Following the Civil War the legal challenges to previously issued Royal Charters continues. Eventually it seemed the Massachusetts Bay Company would be awarded the rights over all of New England so in 1677 Gorges grandson, another Ferdinando who inherited the lands in America, sold the right of Maine to the State of Massachusetts for £1,250. Maine would eventually gain its own statehood in 1820 based on the early royal charters.

So our Islands first Governor was a knighted war hero who for over 30 years oversaw the defences and fortification of Plymouth defending the town against the Spanish and French.  He was deeply involved in the first English settlements of the New World and had a crucial role in the legalisation of the Pilgrim Fathers settlement in New Plymouth and despite never setting foot in America he had a lasting influence in New England. After this weeks slight detour next week it’s back to Plymouth and the Island looking at the lead up to the English Civil War.