DADS ARMY DEFENDS THE ISLAND DURING THE REIGN OF GEORGE III 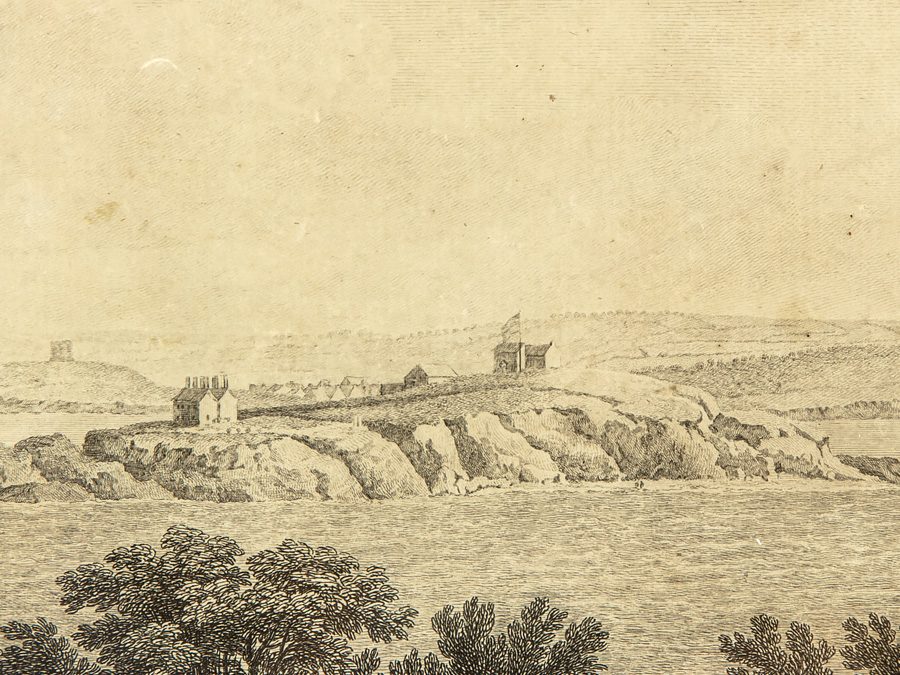 Having taken a bit of a diversion over the last couple of weeks this week is a bit of a catch up on the years from 1760 to 1780 to give a bit of context to the next upgrade of the defences of the Island which began to be planned in 1780. The Island layout was still batteries and firing platforms at points all around the Island. Cannon had been made more reliable and accurate by improvements in gunpowder quality and casting techniques but the range was still only around 600 metres depending on various factors. The Island still required defence against attack from an enemy force as the cannon of the time didn’t have the range or was quick enough to reload to engage the enemy far enough out to prevent a landing. The buildings consisted of the Gunners Barracks to the West together with a Guardroom and Master Gunners Quarters with the top of the Island housing the original barracks for 300 militia and various stores and powder rooms. A 1763 report lists the artillery on the Island as 23 x 32 pounder (pounder refers to the weight of the projectile) guns, 6 x 18 pounder guns and 2 x brass 13 inch (inches refers to barrel diameter) mortars. The level of manning on the Island at any one time is difficult to determine. The Island detachment came from the main Plymouth Garrison and probably rose and fell depending on the threat possibly with a minimum level of manning to maintain the guns.

However going back a couple of years George III was crowned in 1760 following the untimely death of his father from a heart attack whilst on the toilet having his morning defecation. Britain had expanded its Empire across the World and seemed to be constantly at war either defending its gains, trying to expand its Empire or putting down revolts within it. When George was crowned Great Britain was at the tail end of the Seven Years War with most of the European Powers that finally concluded in 1763, the Anglo Cherokee war in North America which finished in 1761 with a pro British chieftain installed and putting down a small rebellion in Jamaica led by a slave called Tacki and his followers in Jamaica. Tacki was a former King in Africa who fought neighbouring tribes a lot. His prisoners became his slaves which either worked for him or were sold into slavery to Europeans. He ironically was defeated by a rival Kingdom, captured and enslaved then sold to European slavers who sold him on in Jamaica. It wasn’t Britain’s finest victory as Tacki only had 25 followers and they committed suicide once Tacki was killed. However the wars and rebellions kept coming, with an inconclusive conflict with the Confederation of First Nations in America, a defeat by the Kingdom of Mysore in India by 1769. This increase in both wars and policing meant a large number of line infantry regiments had been raised who were now identified by their number, for example 11th Regiment of Foot and a separate Corps of Royal Engineers (officers only) and Royal Artillery Regiments were in existence. The work of the Royal Engineers was done by civilian contractors under military command in Artificer Companies with the first soldier Artificer Companies formed in 1772 becoming the Corps of Royal Sappers and Miners in 1812. The East India Company also raised its own units to fight and police on the Indian Sub-Continent but were augmented by regular British Army units as needed or could be spared.

Later in 1774 the East India Company began an inconclusive nine year war with the Maratha Empire both in India. A year later the Colonials in America got somewhat rebellious and war followed in 1775. Worse was to follow, the French decided this was a fine opportunity to regain the lands they lost in the Americas and possibly gain a few more so signed a Treaty of Friendship with the USA in 1778 and joined in the War against the British. Britain was now at War in India with the Maratha Empire and the Americas with the rebellious colonials and their new French allies. Britain’s Army and Navy to say nothing of its finances were stretched to say the least. A year later in 1779 the Spanish joined in as an ally of France having also decided it was a good opportunity for expansion of their Empire or at least get back the ones ceded to Britain. In 1780 the British discovered the Dutch were supplying the French with materiel and so declared war on the Dutch initiating the Fourth Anglo-Dutch war. There wasn’t really any other major powers to go to war with by this stage and unlike previous wars involving Europe Britain had no allies. This meant the French and Spanish could bring their navies to bear on the British supply routes whereas the British had to split their forces over 3 continents and supply them meaning large defensive operations supporting isolated enclaves, Gibraltar was besieged for 4 years and keeping control of the Channel was a major objective including defending the Navy’s bases.

However Britain with limited manpower, the Navy being a priority, resources and finances was fighting to keep its head above water. In 1771 the Royal Artillery had already begun augmenting numbers with invalid companies of the old, infirm and sick to initially man the home Garrisons in Great Britain. Elements of the 41st Regiment of Foot, known as the Royal Invalids were reported as being on the Island by 1777. This was a Regiment of out pensioners from the Royal Chelsea Hospital originally formed in 1688 who were deemed fit enough for Garrison duties. So as with the Artillery it seems British Forces were that stretched that they relied on an early version of Dads Army to defend Britain against attack. However it also appears that resources were stretched thin as in 1779 Parliamentary Papers of that year state there were only 5 guns on the Island. In the same year a large French Fleet arrived in Cawsand Bay and if they had managed to land and bombard Devonport there would have been little the Plymouth Garrison, including those on Drake’s Island, could have done to prevent it. Fortunately a storm and the timely arrival of British Flotilla spoiled the French plans. Nevertheless this coincided with and was possibly the major driver behind the next upgrade of the fortifications on Drake’s Island which began the next year in 1780. Lt. Col. Matthew Dixon RE who was the Chief Engineer of the Plymouth Division began the design of the new defences and Britain was still at war in the Americas and on the Indian Sub-Continent.