A TIMELINE OF DRAKE’S ISLAND 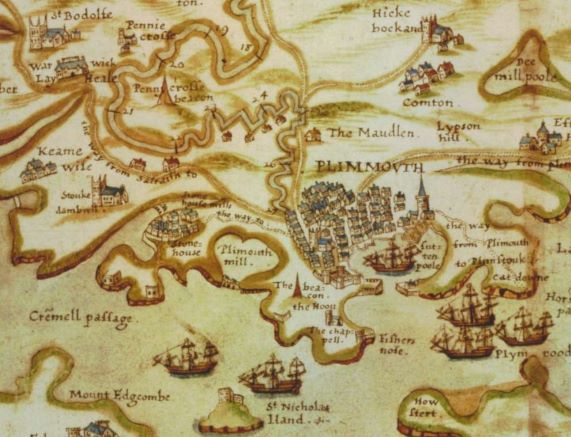 The following is a timeline of the main events in the Islands history. In addition to fleshing out these events there are the numerous human stories that add richness to any history that I will also be writing about.

400 million BCE. The Island begins to be formed by marine fossils from the Age of the Fishes or Devonian Age that eventually form Devonian Limestone

250 million BCE. Last volcanic eruption as the Devonian Limestone is fused with volcanic lava and ash to give the Island its geological base.

1090. By this time the Island was gifted by William the Conqueror to Robert Count of Mortain who in turn leased it as part of the Barony of Trematon to Reginald de Valletort.

1135. First mention of a building on the Island, a chapel dedicated to St Michael.

1270. By this time the lands have been passed to the Priors of Plympton by the Valletort family. The chapel has been rededicated to St Nicholas and the Island was officially known as St Nicholas Island.

1440. The Rights of the Prior of Plympton the Island are still recognised by Parliament over the newly incorporated town of Plymouth.

1541. The dissolution of the monasteries and the Island reverts to Crown Property.

1548-9. The Western or Prayer Book Rebellion. The Island becomes a refuge for Protestants. This may have included a 9 year old Francis Drake and his family as they left Devon for Upnor in Kent.

1550. The Chapel is demolished and the first fortifications, two Tudor Artillery Towers are built using stone from the chapel.

1583. Plymouth petitions Elizabeth I to make Sir Francis Drake the Governor of the Island. However Drake refuses the position and the Queen refuses the petition.

1595. Queen Elizabeth appoints Fernandino Gorges as Governor of the Island.

1602. Federigo Jenibelli, the Queens Trenchmaster or Engineer starts a major upgrade of the defences including barracks for 300 men and store rooms on the top of the Island together with firing platforms and the first walls around the Island.

1642. Start of the English Civil War. Plymouth declares for Parliament against Charles I. The Mayor of Plymouth appoints Sir Alexander Carew as Governor of the Island.

1643. Sir Alexander Carew was plotting to betray the Island and garrison to Prince Rupert and his Royalist forces at Mount Edgcumbe. Sgt John Hancock and Benjamin Fuge of the garrison arrest Carew who is sent to London and beheded on Tower Hill.

1660. King Charles II restored to the throne and the Island is used as a state prison for around the next 25 years. Three died on the Island, Colonel Robert Lilburn a regicide who signed the death warrant of Charles I, Major General John Lambert the last commander of the parliamentary army and Abraham Cheare a non-conformist minister. There were no more than 12 prisoners on the Island and not all were held at the same time.

1717. Colonel Christian Lily produces a series of reports describing the fortifications on the Island as ruinous.

1720. A guardhouse and quarters are the first buildings constructed on the west of the Island.

1772. Richard Bayley of the Royal Greenwich Observatory takes readings from the Island to assess the accuracy of the first sea chronometers on Captain Cook’s circumnavigation of the world.

1774. John Day dies in the first recorded submarine accident just to the north east of the Island

1780. Major modernisation of the defences under Lt Col Matthew Dixon. The buildings on the top of the Island are demolished to make way for a new battery on top of the island facing south. A soldiers barrack block and Officer Quarters were built on the west end of the Island forming part of the current barrack block and Governors House. The quarters are sufficient for 130 men.

1809. A duel between two midshipmen of HMS Charlotte is fought on the Island. Both are drunk and neither manages to shoot the other.

1821. The Island is becoming known as Drake’s Island though St Nicholas Island is used on official documents and charts until the early 1900’s

1822. By now there is a permanent garrison on the Island. Previously it would have a small presence augmented by the militia when there was a threat of invasion or to Devonport. The Island garrison is made up of an Infantry company of up to 3 Officers and 96 men and an Artillery Battery of up to 60 all ranks.

1830. The Governors House is extended and officer quarters added to the western end of the barrack block. The ablution block is also built with sewage treated by bacteria and grey water flushed directly into the Sound.

1846. Major upgrade to the Barracks with the addition of a small hospital and other buildings.

1850. WO2 Edmunds the Master Gunner and Mr Couch the canteen manager attempt to smuggle over 70 kegs of brandy onto the Island but are caught by Customs Officers.

1853. The responsibility for defending the Island now lies with the Royal Artillery.

1859. The Royal Commission on the Defence of the UK recommended the existing battery in the centre of the Island replaced by 5 x 12 inch 25 ton muzzle loading guns; new Battery of 21 x 9 inch 12 ton guns in a Stone casemate arc with iron shields.

1860. The casemates, tunnel and magazine complex together with other associated buildings start being constructed by Messrs. Hubbard, a local builders under the supervision of the Royal Engineers.

1871. The census for the year shows Drake’s Island as having 60 adults and 12 children.

1873. There is a mutiny by some of the Artillery stationed on the Island. 5 Gunners were sentenced to 5 years imprisonment though this was later commuted to discharge from the Army.

1875. WO2 MacDonald the Master Gunner at Drake’s Island absconded rather than face a court martial for selling military stores. Two years later he wrote to his old CO explaining he was enjoying his new life in America funded by the profits of his crime.

1890. The first breech loading guns are deployed on the Island. Searchlights are added to the Island defences to illuminate the Sound and are operated by the Royal Engineers. Maxim gun posts are added for local protection.

1899. The 9 inch 12 ton guns in the casemates are tipped onto the foreshore. The 12 inch guns on top of the Island are buried.

1898-1901. The quick fire batteries along the spine of the Island running east to west are built. There are three batteries each having three gun emplacements.

1910. An anti-submarine boom between the Island and Cornish coast is in place.

1914. Temporary buildings are added to the Island to accommodate a wartime garrison and the associated stores. The garrison return shows 4 Officers, 11 Sgts, 2 Trumpeters and 134 OR’s.

1921 Anti-submarine cribs on the south of the Island are demolished and excess huts on the Island left over from the war sold off.

1926. The only occupant on the Island is the caretaker, Paddy Flood. Gunners come across on a weekly basis to maintain the guns and for exercises.

1933. The Island is permanently garrisoned again.

1939 At the outbreak of war there are 2 x 6 inch quick fire guns and 5 x 12 pounder guns on the Island. Soon after hostilities are declared a 40mm AA gun is installed, the current Pier constructed, Concrete bunkers built, gun sites strengthened, anti-submarine dragon’s teeth rebuilt and 2 Minefield control posts to detonate mines in the sound are built. There are 3 Searchlight positions (used to locate sea craft not aircraft) in front of casemates. The garrison is 13 Offrs and 144 OR’s (Gunners) and 3 Offrs and 49 ORs (Sappers)

1943. The 9 inch 12 ton muzzle loading guns from the casemates that were tipped onto the foreshore in 1899 are recovered and reworked for the war effort.

1945. By the end of the war the Island only suffered slightly from 31 incendiaries and several HE bombs with only 1 person injured.

1945. At the end of the war Drake’s Island is open to the public for the first time.

1951. The Island’s only occupant is the caretaker Sam Kenyon. Gunners visit to maintain the guns and airmen for maintenance.

1956.  Ministry of Supply contractors removed all armaments and fittings and together with the Royal Engineers demolish a lot of the gun positions. 1200 tons of rubble fill the moat at the casemates and the tunnel complex.

1958. Plymouth Council architect has plans to use Drake’s Island as a pleasure garden possibly with holiday chalets to attract tourists.

1960. Adventure Centre starts up by initially making money by renting out the casemates.

1963. National Trust acquires a lease from the Crown Estates for the Adventure Centre.

1964. Mains water pipe laid from the mainland to the Island.

1969. A power cable is laid from the mainland to the Island.

1971. The centre now has space for 65 residential students.

1978. The 12 inch 25 ton guns that were buried before World War I are rediscovered. The adventure centre calls in 59 Independent Commando Squadron Royal Engineers to recover them.

1978. The Centre opens the Island to the public for additional revenue.