A PHOTOGRAPHIC INSIGHT INTO THE ISLAND DURING WWI 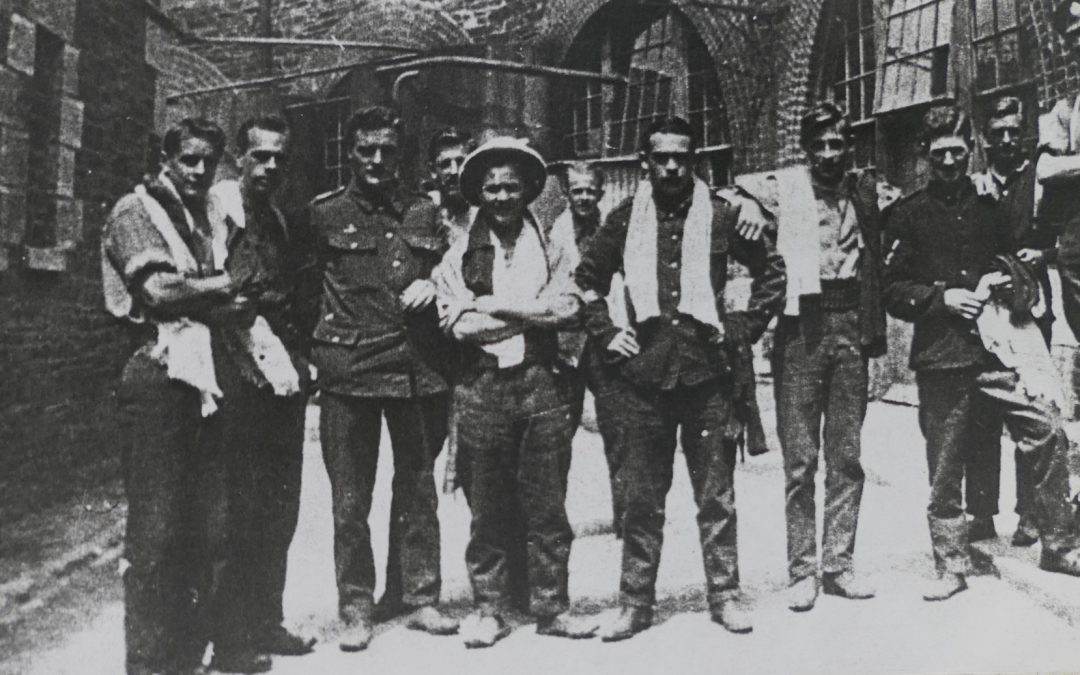 A few weeks back before the new restrictions came into force I managed to get into the Cottonian Research Room of the new Box Museum. One of the folios had some photocopies of some old World War One photos dated 1914. Below are the photos I took of the photographs together with some commentary.

It is difficult to make out the cap badges even from the original photographs. However we do know that the Island was manned by 45 Company of the Royal Garrison Artillery and a detachment from the Devonshire Fortress Royal Engineers who were a territorial force. There was also a detachment from 1/4 Wiltshires providing local defence for the first couple of months of the War. The Casemates were still being used by the Artillery, there were three 12 Pounders in the casemates as well as by the Sappers who operated in casemates converted to workshops and engine or generator rooms. Other casemates had been converted to barrack rooms. The Officers are therefore likely either Gunners or Sappers or possibly a mix of the two.

The picture is taken from the outside of the Casemate looking into the Island. The Iron Blast Shield has been removed and replaced with Block work and the window the Sappers are looking out of. The engine would have been a generator with cables leading to Searchlights that were lower down on the foreshore in front of the casemates during the War.

The cables would have fed directly from the Engine or Generator to the Searchlights. Another Casemate was converted with a ramp and led to the WWI searchlight position.

The Searchlights arrived around 1895 and were used in major pre war exercises so the casemates would have been converted before the War.

During World War I the searchlight operators were generally Sappers from the Royal Engineers so the operators in the photo are likely to be Sappers as can be seen from their handsome and intelligent looks. The Searchlight housing were destroyed either after World War I or more likely just before the Military left the Island in 1960 when we know a number of installations were destroyed using explosives.

The conversion of the casemates meant both Gunners and Sappers were working at the casemates so both could have had accommodation down there. A number of the casemates had their blast shields removed with windows and blockwork substituted which are likely to have been the casemates used for accommodation. From the photo the soldier has his rifle hanging up above him and has added a few personal photographs.

The top of the casemate roof, the vents are likely to be the original vents although the roof has long been completely covered with asphalt. The vent shaft from the inside of the casemates are still visible today. There is also a set of steps in the background that led down from the Western 12 Pounder Battery at the top of the Island and another set of steps leading down t the path behind the casemates. The steps down to the path disappeared by the time the Adventure centre opened but the steps from the Battery may well still be there. We’ll find out when the vegetation is stripped back in the future.

World War I turned out to be a quiet time as the Royal Navy blockaded the North Sea and the German Fleet didn’t venture out after the first major sea battle, Jutland in 1916. The party are Sappers suggesting at least some of the Royal Engineers were barracked in the casemates.

The Islands small resupply boat was the cutter anchored just off the slip. Traditionally the Island always had a couple of Island boats for the movement of the Garrison and resupply of stores. It’s likely they just bought a local boat or ordered one from a local boat maker. The small row boat, sometimes called a punt is on the slipway. The slipway was demolished in 1939 to make way for the current pier.

The Island had its own concert party and the band playing by the centre battery half way up the ramp to the top of the Island was likely part of that as opposed to a formal military band. The detachments were too small to have their own integral band and the Gunner establishment only mentions two trumpeters who were used to relay commands if needed. There are two buildings at the top of the Island that are both gone now. It is difficult to ascertain exactly what they were but judging from old maps and paintings they would appear to be from around the 1846 modernisation or possibly part of the new Upper Battery completed in 1871. A German Recce photo from 1938 identifies them both as Control Centres however this is likely a guess by the Germans.

Some of the Island Concert Party. Se up by Lt Albert Akaster of the Royal Artillery they were popular locally. Albert recruited Ethel Allen, a local girl as his lead violinist and they married just before the war ended in April 1918.

Seems this obstacle course was likely to be something to keep the men occupied rather than any serious military training looking at the spectators.

There would have been the usual raft of routine duties even during wartime. This group of 7 Sappers formed a Guard Detail.

Other duties would have included a Fire Piquet with this hand pulled cart.

The soldiers penchant for mischief and shenanigans wouldn’t have diminished just because the War was on. It is not clear who the defaulter is but the Sergeant behind him is a Royal Engineer who appears ready to deliver a standard military beasting. The soldiers only crime was getting caught!!

Interesting to note there are a few saplings on the Island by now, These would have been recent as there were no trees on photos on from the 1890’s. The vast majority of the fauna came across in the 1970’s so these would be the oldest trees on the Island.

The Commandants Office was at the back of what is known as the Governors House and next to the Ablution Block and Barrack Block.