A DEVONIAN ISLE OR AN ISLAND OF CORNWALL 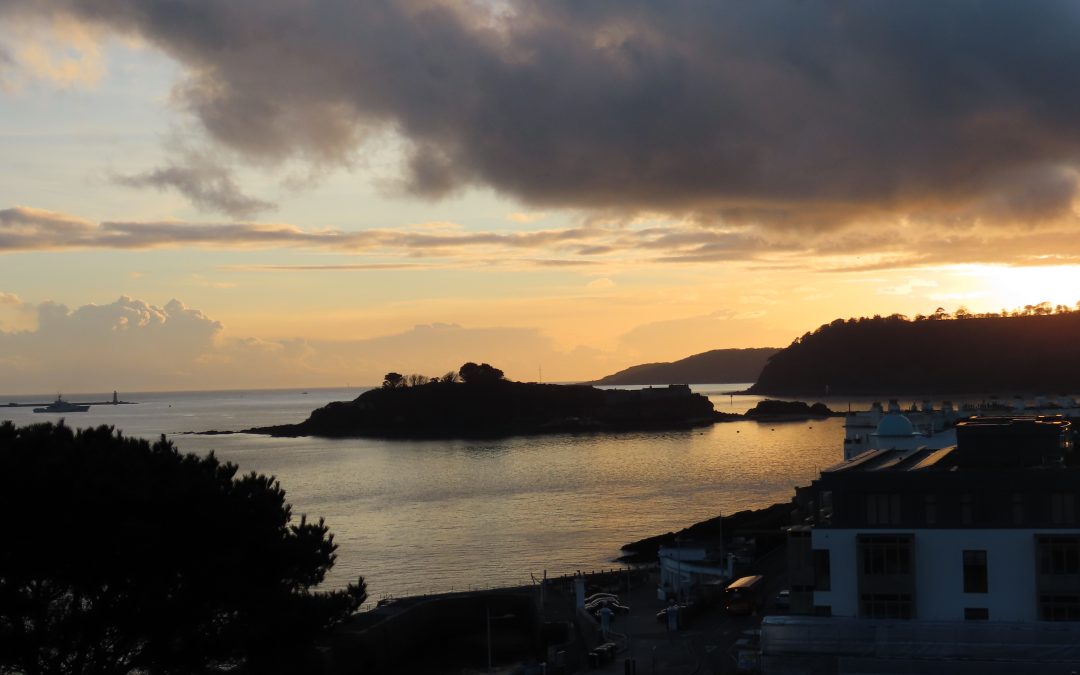 Really a bit of a follow on from last week and who owned the Island is the intriguing question of was the Island originally Cornish or in Devon. I’ll say from the outset there is a bit of guesswork, hopefully somewhat educated in looking at the question and the best I can do is look at the balance of probability over at least the early years.

The Domesday Book written in 1086 is our next point of reference. No Island by any name is mentioned as part of the land holdings on either side of the Sound closest to what is now Plymouth. The Valletort Family held the tenancy of the Barony of Trematon and Manor of Maker in Cornwall. The Manors of Maker and Sutton in Devon were held by King William (the Conqueror) with no tenants, Stonehouse was also held by the King with Robert the Bastard as tenant. There are no mention of any fishing rights at this stage which were recorded as part of the Domesday Survey. With the Valletorts, who we know held the tenancy of the Island, having land holdings near the Island on the Cornish rather than Devon side the balance of probability seems to be that the Island was considered part of Cornwall though this is far from certain. The Earldom, later Duchy of Cornwall had lands in both Cornwall and Devon and shouldn’t be equated back then with the Counties.

However before the first building on the Island, St Michael’s Chapel, is mentioned in 1135 Henry I had granted the Valletorts land in Devon close to the Island which became known as Sutton Valletort and formed part of Plymouth when it was incorporated. It is possible that the Island came with these lands but it seems unlikely as the Chapel was probably built well before 1135 as a Votive Chapel in the reign of William the Conqueror but I can’t confirm this. By 1290 the tenancy of the Island had sold or gifted to the Priors of Plympton. What lends a little more credence to the Island being Cornish at this time is the custody of the Water of Sutton is granted by Edward III to Thomas Coppare in 1331 at yearly fee of £4 and is mentioned as in Devon but is immediately changed to Cornwall in 1332. At this time what was to become Plymouth was still known as Sutton so it is not clear if this refers to Sutton Pool (now Sutton Harbour) or was another term for what we now refer to as the Sound. If it just refers to Sutton Pool it would make sense that the whole of the Sound was considered part of Cornwall anyway as it is one of the furthest parts of the Sound away from the land of Cornwall. The grant also shows it was just the waters not the quays or wharfs which were controlled by the Plympton Priory.

Later when Plymouth was incorporated by Act of Parliament and Royal Charter in 1439 and 1440 St Nicholas Island as Drake’s Island was known back then was specifically excluded from the lands that became Plymouth (Sutton, Sutton Priory and Sutton Valletort) and Plymouth officials could only land on the Island to arrest felons if they took shelter there. If had been part of the old Valletort lands that became part of Plymouth it would have made sense that they became part of the newly incorporated town but as the Island remained part of the holdings of the Priory it seems to tip the scales slightly towards the Island being Cornish at the time. The records of the Duchy of Cornwall also provide a bit of circumstantial support. The Duchy of Cornwall was created in 1337 and the custody of the Water of Sutton is confirmed as part of the Duchy a year after it was created in 1338. The Duchy has a unique official known as the Havener. This official had the responsibility to collect taxes and customs on goods entering Cornwall through Plymouth. Reports of the time state this was done on St Nicholas Island and a few official complaints are made about the Havener and the amount he is charging Merchantmen on St Nicholas Island. As I said earlier we can’t equate the lands of the Duchy directly with the Counties of Cornwall or Devon as it had holdings in both but it does seem that the balance of probability was still that the Island was in Cornwall.

The next event of note is the dissolution of the Monasteries under Henry VIII. The Plympton Priory is dissolved in 1537 and its lands, including the Island come under the direct control of the Crown. However there are links to Plymouth. In 1548 Edward VI ordered Plymouth to construct the first fortifications by converting St Michael’s Chapel to a bulwark. This happened over the next few years and the first fortifications were complete in 1549 or 1550. It appears that Plymouth paid for the fortifications and would provide the Militia although Edward VI paid for the Gunners to man the Island. The Gunners at this stage were officers only and a specialised part of the Office of Ordnance. They would train and use part of the local militia to man the guns if required. In 1580 the Corporation of Plymouth orders Sir John Hawkins to prepare a document transferring the Buildings and Furnishings on the Island to the Crown. This doesn’t indicate a transfer of ownership but a transfer of the fortifications built and paid for by the Corporation. In 1583 there seems to be a more formal arrangement and Queen Elizabeth I grants part of the customs revenues to Plymouth to maintain the defences. New defences seem to be paid for by the Crown as in the early 1600’s the Queens Trenchmaster or Engineer working on the Island, Frederico Giambelli is funded by the Crown not Plymouth. One other little snippet is that in 1585 a letter is sent to the Justices of Cornwall by Plymouth asking for £23 17s 4d in addition to £29 12 4d already paid for furnishing soldiers on the Island. This seems to indicate a Cornish responsibility for the defence of the Island possibly through the Island being considered part of Cornwall. The other final part of this fog of ownership is that the Governor of Plymouth was also Captain or Governor of the Island. This doesn’t indicate that the Island was now part of Plymouth. It was a Crown and military appointment. As the Plymouth Militia and later Plymouth Garrison provided detachments to man the Island this makes military sense so is debateable as evidence that Plymouth owned the Island. Although arguments can be made on both sides it seems to me on balance the Island was considered as part of Cornwall at this point.

One other way of settling the dispute is if we can find a transfer of the Island from Cornwall to Devon and specifically Plymouth under whose jurisdiction it is today. Jewitt writing in 1871 but referring to earlier in history believed that the Island was in the Cornish part of the Parish of Maker whose boundary is different to the two Manors mentioned in the Domesday Book. Wallis writing in 1847 thought it had been part of Maker up to 1844 but was now part of Plymouth. The first major change to the way Plymouth was run since it was incorporated in 1440 happened with the Municipalities Act of 1835. White writing in 1850 states that the Island became part of the Borough of Plymouth as a result of the Act, however he doesn’t say if it was an addition to Plymouth or not. However if the charter of 1440 was unchanged until the Municipalities Act then it would tend towards the Island being part of Cornwall up to that point. Finally we do know that the Island was sold by Prince Charles as the Duke of Cornwall in 1996 to Dan McCauley. As I said earlier the Duchy does hold lands in Devon but looking back to those first land grants recorded in the Domesday Book this seems to point towards the Island being in Cornwall originally.

All still as clear as mud really!! When a café opens on the Island I don’t think you will be wrong if you put Jam or Cream on your scone first. More and more records are being digitised with modern search engines that make it easier to search. I haven’t given up hope of finding something more definitive but for me the balance is that the Island was in Cornwall until the Municipalities Act of 1835 and it became part of the Borough of Plymouth. Mainly because the original land grants seem to put the Island in Cornwall and the fact that when Plymouth was incorporated the Island was not included in the lands they rented. Everyone I’m sure will have their opinion from what I have found out and other information you may have at hand.