1898, The First Breech Loading Battery and the Defences Tested 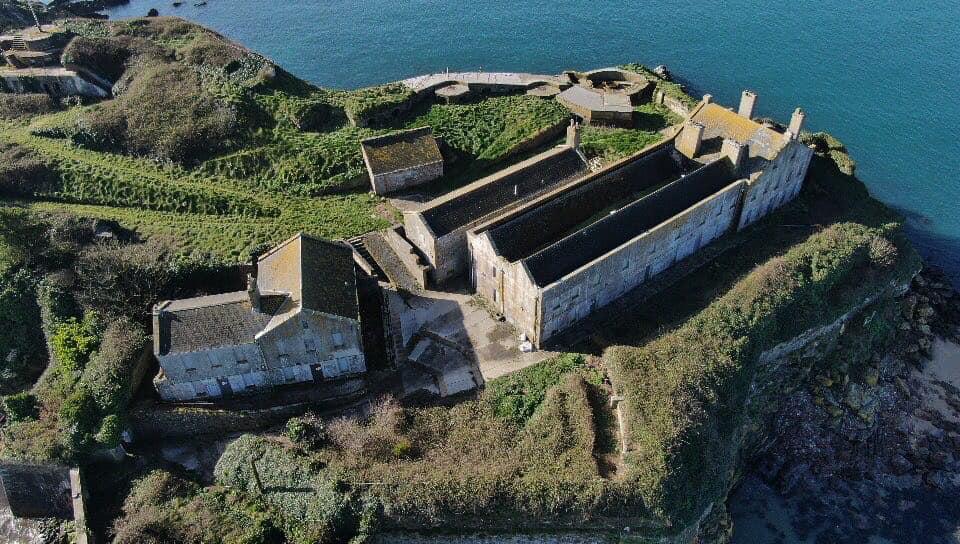 These next set of plans cover the period from 1898 to World War 1. The defences up to this point had all been Rifle Muzzle Loaded Guns which were slow to fire and designed to combat the first Ironclad warships launched by the French in 1859. However the current seaborne threat was now from fast raiders, small destroyers and predominantly torpedo boats. Fortunately new artillery had developed to counter the new threat. The problem of the gas leaks on the first breech loading guns had been solved. Two types of gun were planned for the Island, the 6 inch Breech Loading (BL) gun which fired at a rate of 8 rounds per minute and the 12 Pounder Quick Fire (QF) gun which had a rate of 15 rounds per minute, both significantly quicker than 5 minutes it took the gun crew of the RML guns to reload. A defence Committee report of 1884 highlighted these problems and subsequently the Royal Engineer and Royal Artillery Works Committee started work to resolve the issue.

There were 3 Batteries eventually designed for the Island each having 3 gun emplacements. The Western Battery nearest to Mount Edgcumbe and Eastern Battery closest to Mount Batten were designed for 12 Pounders. Sandwiched between them was the Central Battery designed for the 6 inch BL guns. We can look at the original designs and how they changed as WW1 approached together with the use of the various buildings over the next couple of weeks.

The first set of surveys were of some of the existing buildings and structures to show where the proposed new Western Battery would go and how the Magazine store would be utilised. The Map also shows how the Western Battery would link into the other forts that provided the outer and inner lines of defence to the Sound and how the arcs of the guns would overlap. The Outer line was Fort Bovisand, the Breakwater Fort and Fort Picklecombe. At this stage it appears the defences would still include the five 25 ton guns of the Main Battery and the Casemated Guns and the other 2 new Batteries would be added later in a step by step process. The previous defence building programme, the Palmerston Forts, became known as the Palmerston Follies because their immense cost and the fact they were obsolete within 30 years. All of around 180 of the Palmerston Forts were built at the same time meaning a massive financial commitment, not all were completed and some never started. This possibly accounts for the piecemeal approach to this defence upgrade and not to commit to all the upgrades at once. Although not all 180 forts would require upgrading it would still be a significant commitment if all the upgrades happened at once.

The first of three Batteries built was the Western Battery in 1898. The design was done by the Royal Engineers from the CRE Office at Plymouth under authority from the Command at Devonport. I can’t find who did the construction, by this stage advertisements for tenders for contracts on Military bases had stopped though I wouldn’t be surprised if a local firm was contracted for the work or at least some of it. The Royal Engineers would still have been stretched to do all the upgrades covering the whole country that were happening at the time although it is still quite possible as there was no immediate threat they were used to work their way round at least some of the various defences upgrading them.

Overall the Western Battery included 3 gun emplacements and was supported by the Quick Fire Magazine which was the old Tudor Powder House and the Range Finder Station which would give the gunner the range and elevation required to take on the enemy. Each Gun position was a low level open position with a metal baseplate to bolt the gun to the mount. Each position had 4 forward ammunition lockers. The ammunition would be moved from the Magazine to the Gun Position and stored in the lockers ready for use. Each of the lockers would have wooden doors (which would be upgraded to steel for World War II) and a rain hood. Two of the lockers would hold the shells and two would hold the cartridges to fire the shell. Each recess would hold up to 30 shells or 24 Cartridges so 60 shells and 48 cartridges. The gun crew would fit the shell to the brass cartridge before loading. The QF gun fired at 15 rounds per minute so each emplacement had only 3 minutes worth of ammunition.

The Range Finders would be specialist Gunners who would provide the range and elevation the Gunner would need to engage the enemy. The Range Finder Station and Gun position would be linked by telephone. Before World War 1 this system would be replaced by a combined Range Finder, Fire Control and Electric Light Director Position. The three commanders would be linked by phone to their respective positions. The searchlights operated by the Royal Engineers were needed to illuminate the enemy so the Range Finder could provide the range and elevation to the Fire Control Officer who would relay it to the guns and give the order to fire.

The shelter would be somewhere for those not in immediate action to wait away from the gun but close enough to reinforce and assist if required.

There were changes to the organisation of the Royal Artillery with the formation of the Royal Garrison Artillery being formed. Part of their responsibility was Coastal Defence with the Island Garrison reinforced the Militia or Territorial Force which was renamed the Royal Garrison Artillery Volunteers. So it was the Royal Garrison Artillery that manned the Island at this time along with elements of the Royal Engineers to look after the Searchlights. These would have been small regular detachments permanently on the Island and beefed up with the Territorial volunteers at times of war or in peacetime for exercises and training. From 1899 there were major exercises involving all the forts protecting the Sound with the Royal Navy providing the enemy in the form of destroyers and torpedo boats with the Territorials deployed as part of their annual camp to train on the guns leading up to the full blown exercise. It was very much a spectator sport with the new searchlights illuminating the Sound form each fort and blank charges being fried at the enemy. The results of the exercise where the umpires where the umpires declared the winner were always reported and eagerly anticipated in the local papers. In this case the winners were declared to be the defenders and these large defence exercise became an annual part of Island life.

Next week the addition of the Central Battery, the removal of the magazine store and alterations made to the underground magazines so they could effectively resupply the new battery.