1846 DEFENCE UPGRADE OF THE ISLAND 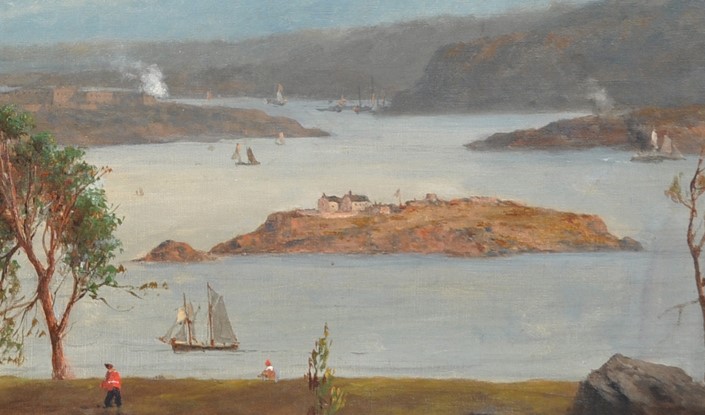 Way back as part of the plans for the 1780 upgrade one of the foremost architects of the day, James Wyatt who designed a number of Oxford Colleges, the Royal Military Academy at Sandhurst and the Royal Arsenal and Military Barracks at Woolwich submitted plans for the Governors House on the Island. Exactly when and how much of the works was carried out is difficult to tell but paintings of the Island suggest that it wasn’t done as part of the 1780 upgrade but was complete by 1850. There was a defence review undertaken in 1844 and as a result there were some substantial additional works done by 1846. This is confirmed as the Plymouth Records Office has a description of a brass plate that disappeared after the Training Centre closed. It records new buildings, including a hospital and additions to the barracks which increased the accommodation from 3 Officers and 59 Non-Commissioned Officers & Men to 5 Officers & 134 Non-Commissioned Officers & Men. The additional accommodation would have been welcome as one of the barrack blocks on the Island was converted for use as a powder store in 1805. It is also worth remembering that at times extra men would just have been crammed into available space rather than be limited by the specified numbers of bedspaces.

These works would appear to include the completion of the Island House, the Officers Annex to the Barrack Block built in 1780 and the Ablution Block next to the 1780 Barrack Block. Newspaper reports also mention a new canteen, though it doesn’t say if it was a separate building and a new gun battery of two half moon gun emplacements.

Originally a guardroom and married quarters these buildings were extended to become the Island House also known as the Governors or Commanding Officers House. When complete it consisted of 5 rooms on each floor with separate entrances at the front and a rear entrance at the back on the upper and lower floor. Presumably it would have been for the Commanding Officer and any servants with rooms ready for entertaining visitors and possibly overnight accommodation.

The Barrack block from 1780 was originally for the Gunners only so it may have been adapted internally as well to upgrade it to the 134 mentioned. The layout is of 8 barrack rooms on each floor giving 16 in total for the men. So it looks from the numbers as if each room would have housed around 8 soldiers if this was the sole major barrack accommodation. The Officers Annex had 4 rooms on each floor but at least one on each was a living room and the attic had space probably for the Officers Batmen or servants. Another possibility is it was the Sergeants accommodation but as it has stairs down to the main living quarters and the servants were required to be on call it seems the balance of probability is it was for the Batmen. Although built onto the end of the Soldiers barrack there was no internal link. The batmen (or possibly Sergeants) accessed their quarters in the attic from the rear of the building so they wouldn’t use the same door as the Officers and disturb them. An 1847 barrack return states 20 rooms were for sleeping with the Other Ranks 8 to a room and Sgts having their own room. Different Regimental Detachments may also have allocated the accommodation differently as their numbers, especially the infantry varied from detachment to detachment.

The ablution block is likely to have housed other facilities. It was definitely an ablution block as newspaper reports of the time confirm that was its use. Both floors consisted of 4 rooms each of varying size but there were no staircases linking to the two floors and not all the rooms on the same floor are linked internally suggesting the building had separate uses. So this could have housed the ablutions and the hospital. The garrison wasn’t that large so it would have been probably a small infirmary. It did however see use fairly quickly as there was a severe cholera outbreak throughout the UK in 1849. At least one Gunner, Michael Russell was initially treated on the Island before being transferred to the mainland where he unfortunately died a week later. Newspaper reports are frustratingly vague about locations on the Island but the new canteen was possibly part of the ablution block as well and there is also the possibility that it was additional barrack space. The 1847 barrack return also mentions a cookhouse so this could well be in the ablution block and could have doubled as or actually mean the canteen.

There were new mobile furnaces for heating the shot for the cannon and two half moon gun emplacements on revolving platforms. Half moon simply means the defensive wall protecting the guns was crescent shaped. This fits in with a report of 1847 stating there were now only two batteries on the Island, this new battery and the one on the top of the Island with the other gun batteries around the Island now not needed. Piecing together newspaper reports and looking at paintings of the Island my best guess is the new battery would be at the eastern end of the Island covering the main channel out to the new breakwater and Mount Batten. No 1 Battery was of 2 x 56 pounder Guns and 6 x 8inch guns all on traversing platforms with 6 x 32 pounders on common carriages. No 2 Battery was of 2 x 8inch Howitzers on common carriages. Unfortunately experiments on the Island carried out in 1848 proved that the Limestone defensive walls proved too brittle to withstand enemy fire and were to be replaced by granite or asphalte brick although the new platforms increased efficiency and accuracy when the guns were in action. It would be demolished to make way for the Palmerston upgrades that started in 1860 though there are no reports I have found showing the Limestone walls were replaced by then. The magazine store, originally a barracks built in 1780 roughly behind the Governors House was also still in use and was also demolished to make space for the Palmerston defence upgrade.

We can say with some certainty that the buildings at the western end of the Island as they appear now were complete by 1846 and by 1848 there were now only two gun batteries on the Island, the one on the top of the Island and the new half moon batteries. The other gun emplacements were not now needed as the breakwater would channel enemy ships and there were also additional batteries constructed to defend the Sound both on the Cornish and Devon sides.

The following year in 1849 the first commercial contracts were put out to tender in the newspapers. Firms were invited to tender for barrack services, lamp lighting, sweeping chimneys, straw, ashes and privy soil, and for washing and repairing bedding. Essentially there was a removable pot under the toilet that was covered with earth then moved to an outside location to decompose. This contract was to run for 3 years. Canteen contracts which began being advertised in 1830 also ran for 3 years and by 1848 Mr Charles Couch had taken over from Samuel Law as the Canteen Manager. Tenders to supply Flour, bread, meat and forage for 6 months were also advertised along with yearly contracts for fuel and light consisting of coke, coal and kindling wood plus candles. The garrison would also have got supplies from the Royal William Yard as the victualling point moved from the Barbican area during the 1830’s.

So it was a busy couple of years on the Island with major upgrades to the buildings on the Island plus a reorganisation of the gun batteries which would need further work on the defensive walls. It’s become more apparent how the Island was supplied and how the garrison lived. Next week Colour Sgt Wynne undertakes an heroic rescue after the cutter from HMS Stromboli capsizes and the week after the Master Gunner, Sergeant Major David Edmunds in conspiracy with the Canteen Manager and a French Merchantmen attempt a major smuggling operation.