1716, THE ROYAL ENGINEERS AND NEW BARRACKS 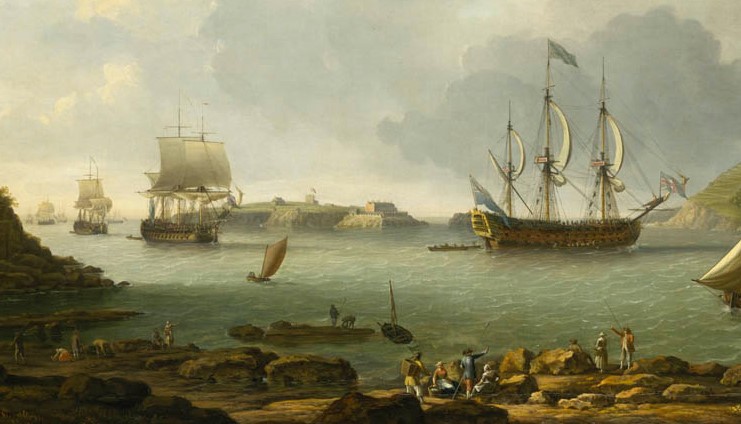 In 1714, around a year after the conclusion of the War of the Spanish Succession Queen Anne died. The Act of Succession meant only a Protestant could become the Monarch but Anne left no heirs. Not for the want of trying mind she was pregnant 17 times but either miscarried or had stillborn children. So George, the Elector of Hanover was asked to become King despite never having been to England or speaking English and if not exactly hating England and the English wasn’t that keen on them. However the promise of a substantial tax based income persuaded him to become George I founding a dynasty that rules in Britain to this day.

Initially on the Island there was little change. On his accession in 1714 George I confirmed Major General Charles Trelawney in his post as Governor along with Major Hook remaining as his deputy and the 2 Master Gunners and 18 Gunners were retained as part of the garrison. However in 1716 there was a reorganisation of the Board of Ordnance with the creation from its officers of the Corps of Royal Engineers and the Royal Regiment of Artillery. The increasing number of wars and colonies meant a larger need for Engineers on the battlefield, for the defences and maintenance of Garrisons at home and in the colonies, for accurate maps and the research and design of new guns, equipment, defences and tactics. It also meant a need to provide a larger permanent body of Gunners under the direct control of the Army hence the decision to raise separate bodies of men for the specific tasks. Naturally the most intelligent and handsome officers from the Board of Ordnance were appointed to the Corps of Royal Engineers, including in Plymouth Colonel Christian Lilly with the residue forming the Royal Regiment of Artillery. The Artillery Garrison for Plymouth and the Island remained unchanged with 2 Master Gunners and 18 Gunners being retained.

Back to Colonel Lilly, originally an Engineer with Prince William of Orange he was part of William’s Army that came to England as part of the Glorious Revolution after which he was naturalised as an Englishman. He served in France and Flanders (Belgium) before heading out to the West Indies. In Jamaica, Kingston was built according to his plans replacing Port Royal which had been destroyed by earthquake. Clearly a man of some talent he was appointed as Third Engineer of England at £150 a year by a Royal Warrant issued by William III in 1701. From 1702 – 1713 he made surveys of the harbours of Jamaica, Barbados, Antigua, Nevis, St. Kitts, Newfoundland and St Johns repairing and improving the fortifications. George I confirmed his appointment as Third Engineer in 1714 and the following year he was appointed to examine Portland, Dartmouth, Plymouth, Falmouth, and the Scilly Islands and to survey, repair, and “project what might be necessary to maintain and improve the defences”.

Whilst Colonel Lilly was producing his report some repairs were done on the Island. A treasury report of 1715-16 shows Justinian Buckingham (plumber) John Watts (Mason) John Dyer (Carpenter) William Bass (Smith) Stephen Ale (Slater) and James Stevens (Glazier) were paid £299 12s 7 ½d for work done on the Island. It is difficult to know what prompted this work. One possibility may have been if Colonel Lilly produced an initial report or that the Governor was able to obtain funds from the Treasury. It would appear that the work was done to the original buildings constructed under Federico Genebelli at the top of the Island during the reign of Elizabeth I as there are no new buildings on an early 1700’s sketch of the Island.

Colonel Lilly produced his final reports in 1717 which, approved by the Board of Ordnance, were so good that the form was adopted for general use. However he described the defences on the Island as ruinous. There were probably a couple of reasons for this. Firstly the buildings on the Island had been used continuously for a number of years and secondly we know from reports that the Island had been so full that they literally could not fit any more troops on it suggesting the Island had been well over the capacity it was designed for and finally money was always scarce and would not have been granted unless absolutely necessary.

Britain was now back at war under George. Initially there was the War of the Quadruple Alliance against Spain (1717-20). This was a Spanish attempt to regain the possessions it lost in previous wars and included a minor Jacobite rising against George in Britain. It was a number of widespread minor engagements mainly in America and the Caribbean which resulted in the maintenance of pre-war borders. Almost immediately afterwards there was Drummer’s War (1721-25) against France and her native American allies in North America. This was a bit of unfinished business from the previous conflict under Queen Anne. The native American tribes were raiding whilst being financed by the French. However as they took losses they came to peace terms with the British although the French opposed the peace treaty. Therefore although land ownership remained unchanged the British position was strengthened compared to France and her native American Allies. By this stage Major General Trelawney had retired as Governor of Plymouth and the Island of St Nicholas in 1722 to be replaced by Lieutenant General Charles Churchill.

Clearly the gradual globalisation of war as the major powers empires expanded meant the Navy and the protection of its bases and dockyards became increasingly paramount. At this stage the Royal Navy was not yet supreme at sea. Although becoming more dominant we still needed strong defences and this included St Nicholas Island. It appears that Colonel Lilly’s report was acted on, at least in part as by the end of Drummers War in 1725 we have a plan of the defences on the Island which show buildings had been constructed which do not appear on the earlier 1700’s sketch of the Island. It seems the additional buildings were a Gunners Barrack, Master Gunners accommodation and a Guard Room which were later incorporated in the Barracks and Governors House which exist today. The original buildings, the main Barracks, store rooms for provisions including a salting house and the Governors House were still standing on the top of the Island with the main powder magazine. The firing points were repaired where necessary but remained on platforms linked into the walls or earthworks around the Island with their associated powder and shot magazines.

This period was one of some significant change for the Island. There was a change of Monarch and Governor, the old buildings and defences that had become ruinous with over use were repaired and new buildings were added to the west of the Island. There was now a distinct Army Artillery Regiment which provided a Master Gunner supported by a few Gunners on the Island itself. More importantly The Corps of Royal Engineers was also founded and Colonel Lilly added to an illustrious list of Engineers who left their mark on the Island by designing the new barracks for the Gunners on the Island. I will just add as someone who served for 22 years in the Corps of Royal Engineers that although both the Royal Engineers and Artillery were originally founded from the same Department of State, the Board of Ordnance, and therefore have the same motto “Ubique” they mean different things. For the Royal Engineers it means “Everywhere” showing they have been involved in every military campaign the British Army has ever fought whereas for the Artillery it means “All over the place” indicating their inherent hopelessness and propensity for lobbing shells pretty indiscriminately over on the battlefield. Next week we’ll look at the life for the Garrison on the Island and the first major shipwreck on the Island, HMS Conqueror.