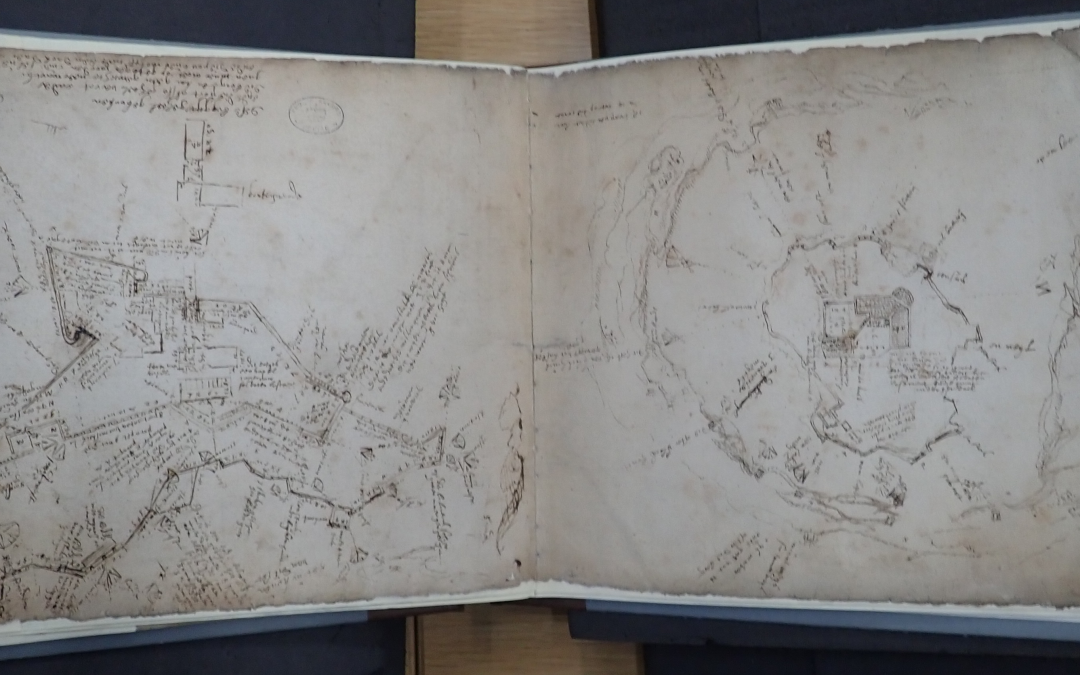 I came across two old charts dating back to at least 1600 and possibly slightly earlier of the first fortifications on the Island and the Tudor fortifications that pre-dated and were incorporated into the Royal Citadel often known as Drake’s Fort. The Queen’s Engineer who worked on both fortifications was Federico Genebelli (sometimes spelt Giambeli or Jenebelli). He was an Italian, who were the foremost fort designers and builders of the time, and reported to Sir Robert Cecil the Queens Secretary. I am unable to decipher the writing unfortunately but I am searching for a publication of Fort Magazine which contained notes made by Professor JR Kenyon who first identified the charts and dated them at around 1600.

Looking at the Island, then known as St Nicholas Island, first. In 1601, around the time they are dated, Gianbelli did an initial survey of the defences on the Island which found that the wall round the Island was complete but decayed and the Buildings were not yet complete. The chart shows the main fort, defensive wall with gun platforms and the Guardhouse with the Gateway. This buildings were still standing in 1716 when they were surveyed by Colonel Lily of the Royal Engineers.

The Fort was 3 storeys high. The Ground Floor was the Soldiers Barrack rooms and the Sutlers Store. The Sutler was a civilian merchant who although under military command sold provisions. This was before the military had a commissariat or its own supply chain. The second floor housed the Officers and Sergeants Barracks together with more stores and Soldiers Barrack rooms. The Soldiers would have been the local Militia who wold have needed to stay on the Island when Plymouth was threatened, by the Armada in 1588 for example. However they would not have stayed permanently on the Island being civilians called out in times of danger. Colonel Lily doesn’t describe the third storey although from his plan and section drawings it appears to be a basement which would have also been used for stores.

The Gateway was an open passageway or tunnel with a Gunners Barrack on top. From earlier records the first soldiers paid for on the Island were the Master Gunner and 3 additional Gunners. The Gunners were regular soldiers, part of the Baord of Ordnance. The Guardhouse which was next to the Gateway was two storeys, the ground floor being the Guardroom and the upper floor being more a Soldiers Barrack.

The chart of Drake’s Fort on the Hoe is just provided for interest. My focus is on the history of the Island but I thought the chart being part of Plymouth would interest many of our community. The Fort was incorporated into the larger Citadel in 1666. The road that now divides the Citadel from some of the earlier fort from Fishers Nose running along the foreshore towards the Hoe was a later alteration. Originally the whole of the earlier fort was part of the Citadel.

The 1666 Chart is from after the Citadel was built over the original Drake’s Fort. You make out the foreshore which is common to both and see how the majority of Drake’s Fort including the Fishers Nose and Queen Elizabeth Blockhouses were originally incorporated but are now separated by the road from the Citadel.

I hope you enjoyed looking at these charts which although a bit light on detail partly as I can’t decipher the writing but are fascinating none the less as they were produced as the fortifications were being constructed. As such they are some of the oldest charts we have of the Island and Drake’s Fort. The next blog will look at charts from 1881 which shed new light on the buildings and their use together with information from official military manning and accommodation tables for the the Island.